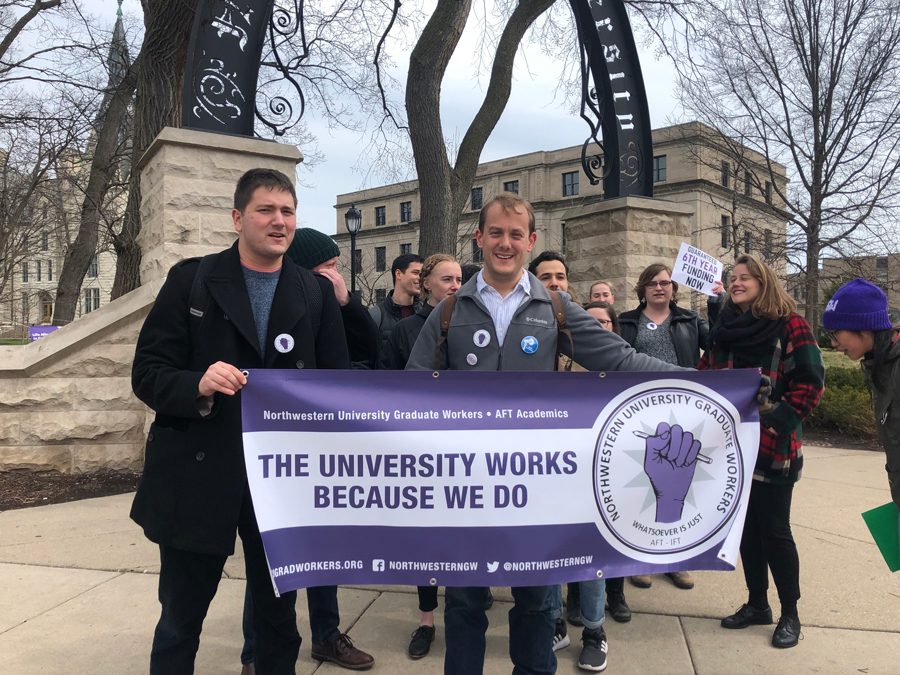 Graduate students march from The Rock to Rebecca Crown Center to demand The Graduate School guarantee sixth-year research funding. Opportunities for such funding have been restricted since last year, when TGS stopped allowing sixth-year students from funding their research through assistantships.

Graduate students rallied Thursday and presented a list of demands of The Graduate School during Northwestern University Graduate Workers’ first public action to lobby for guaranteed sixth-year research funding since it was discontinued last spring.

Protesters marched from The Rock to Rebecca Crown Center, where Sergey Kucherenko, TGS’s associate dean of finance, met them to receive their demands in place of Dean Teresa Woodruff, who Kucherenko said was in Chicago. Kucherenko told the protesters he could “guarantee” their voices would be heard.

Fifth-year graduate student Kitty Yang handed Kucherenko the demands and told him the students expected a response and timeline for action “within a week.” Kucherenko told Yang she and the other students could expect a response within “a couple of days.”

“These are not demands that are new,” Yang told Kucherenko. “TGS knows that sixth-year funding is really important.”

NUGW, the University’s graduate student union, has been pushing for guaranteed funding since TGS stopped granting funding to sixth-year students through assistantships — which include research and teaching positions — last May.

Though assistantships are only available to second through fifth-year students, in the past, some students were granted exceptions. In an email to graduate students last year, Woodruff said the school would no longer make those exceptions.

“A lot of us need a sixth-year of funding to get degrees and good jobs,” Kleinhenz said to cheers at the rally. “We haven’t been able to make our voices heard. We don’t have a seat at the table. So this is what we have to do.”

Especially in the humanities, completing a doctoral degree is rarely something that can be accomplished within five years, said Anna Dumont, a fourth-year art history graduate student.

Dumont said she doesn’t know anyone in her department that finished their doctorate in five years. While she said she knew she was entering a precarious situation by joining a graduate program, she began her research at NU assuming there would be options to apply for funding beyond her fifth year.

Now, she’s having second thoughts about a project in which she’s deeply invested because of the travel costs associated with it. To make up for that, Dumont said, she’s had to apply for large numbers of fellowships — a task that distracts her from her research.

“Your work basically stops for that period of time, which makes it even more difficult to finish in the period of time the administration for some reason thinks it should be possible,” Dumont said. “We’re constantly in a state of limbo where we don’t know if six months from now, we’ll still be funded to do our research.”

The fight for sixth-year funding takes place in the midst of a $94 million budget deficit, which has led to cuts University-wide. TGS — like the undergraduate schools at the University — was directed to make a five percent cut to its budget.

Regardless, many graduate students believe the University is still in a position to fund their research.

“We know the University can afford this, so it seems particularly cruel that they’re choosing not to,” Dumont said. “It’s the case that we’re not responsible for the deficit. The leadership of the University made decisions that lead to it, and now they’re trying to pass those costs onto the people at the University who are the most vulnerable.”

Many of the students also expressed frustration that administrators weren’t listening to them. It was “ridiculous,” Yang said, that graduate students had to resort to letter writing and petitions to receive recognition from University leadership.

“This is the first public action for sixth-year funding, but it will not be our last,” Yang said to cheers during the rally. “We are workers. We have a right to have our voices heard.”