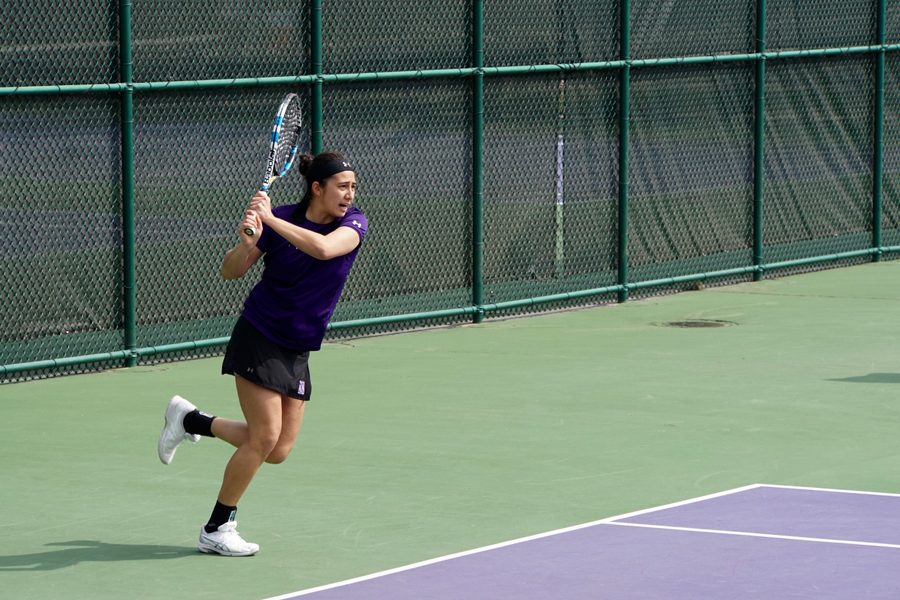 Lee Or hits the ball. The senior was the only player to win both of her singles matches last weekend for NU.

The weekend of April 6 and April 7 had the potential to be a historic one for Northwestern. If the then-No. 25 Wildcats could finish the two-day stretch with wins over then-No. 18 Michigan and Michigan State, they would be in good position to win the Big Ten for the second season in a row.

“If there’s any silver lining that you can find from Sunday, was that the girls were so disappointed and so fraught about Saturday that they couldn’t perform Sunday. Even though it’s not much of a consolation, I feel relieved and grateful that my players care so deeply about Northwestern women’s tennis, and that speaks volumes to what we’re about,” coach Claire Pollard said.

Senior Lee Or was the only Cats player to win both of her singles matches. Or on Saturday claimed a 6-3, 6-3 victory over Michigan’s Chiara Lommer — the 28th ranked singles player in the country — and then won in two sets again facing Michigan State on Sunday.

For just the third time this season, NU did not take the doubles point against the Wolverines. Or and freshman Clarissa Hand fell 6-2 at first doubles, while junior Julie Byrne and freshman Hannah McColgan tied their match at six games before losing in a 7-3 tiebreak.

In first singles, Clarissa Hand lost in straight sets to Kate Fahey, the current No. 3 ranked singles player in the country and the defending Big Ten Athlete of the Year.

Sophomore Caroline Pozo almost walked away with a win at third singles against No. 45 Brienne Minor — a senior who won a national title as a sophomore and played in the US Open in 2017 — but lost in three sets, her first in six matches. The overall team defeat put a damper on the Cats’ spirit heading into Sunday.

“We did not handle the moment against Michigan well,” Pollard said. “We didn’t perform very well and we handled the fact that we performed badly and were so disappointed in ourselves, that carried through until Sunday and never left us.”

Weather forced NU to play indoors against Michigan State, but the change of scenery didn’t help. The Cats got a 7-5 win from Hand and Or at first doubles to claim the first point of the match. After the break, all but two of their six singles players fell down 2-0 in their opening sets.

Or and senior Rheeya Doshi each won in two sets, but the Cats’ final three matches — played by Julie Byrne at first, Hand at second and sophomore Inci Ogut at sixth — of the afternoon all went to three sets. The Spartans mustered enough energy to win all three matches and claim their first-ever win over the Cats.

The race for an undefeated conference record may have ended, but the season itself isn’t over. NU has four matches before the Big Ten Tournament begins, and the Cats will head on the road this weekend to face Minnesota and Wisconsin. Pollard thought the change of environment would help NU finish the regular season on a strong note.

“We need to move on, which is easier said than done,” the coach said. “There’s so much tennis left, so many great opportunities, and I hope we can take advantage of that.”