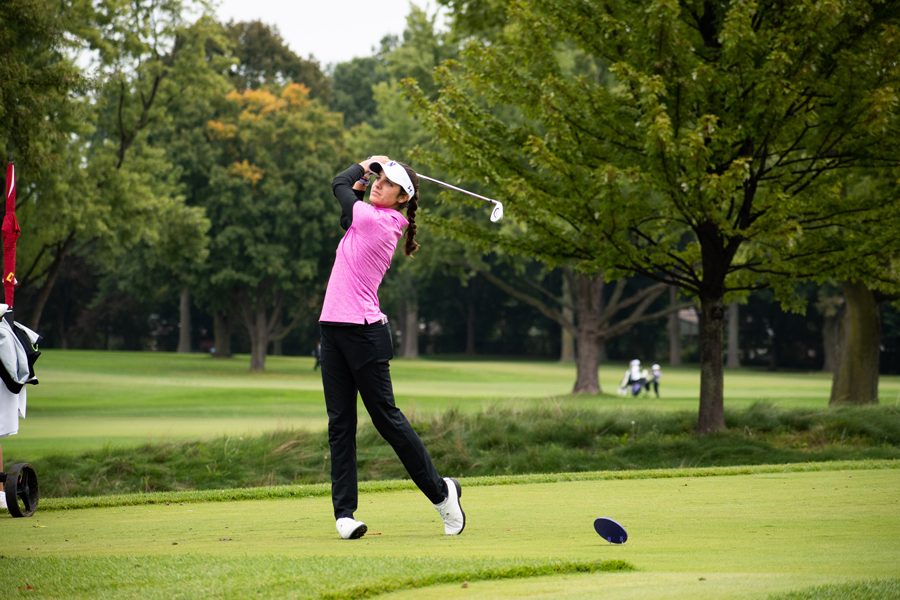 Brooke Riley takes a swing. The junior gave a career-best performance at this week’s Silverado Showdown.

In the nine tournaments junior Brooke Riley has played this season, she’d never finished better than seventh place. So when she finished the second-to-last round of the Silverado Showdown on Tuesday with the best score in the entire field, Riley was in uncharted territory.

Then that morning, the conditions at the Silverado Resort and Spa in Napa, California, took a turn for the worse. Riley walked up to the first tee box with the wind howling and her driver in hand and took her first shot of the day.

Her opening drive sprayed onto the rough. Riley bogeyed the first hole. But by taking a more conservative approach after that first hole and using measured shots to keep the ball of the fairway, Riley won the first tournament of her career and led No. 16 Northwestern to its first tournament victory of the season.

“I told the girls that there’s no substitute for being able to be under that kind of pressure all day long into you know, still perform and hit good shots and come out on top,” coach Emily Fletcher said. “Doing this will be something that we’ll continue to build on not only in the coming weeks, but beyond that.”

In a field that included No. 1 USC, No. 4 Stanford and No. 9 UCLA, the Wildcats’ team score was four shots better than the second-place Trojans. Collectively, NU had 870 strokes over three days, finishing six shots over par collectively. Three players placed in the top seven of the field, including Riley, who finished one shot under par, as well as senior Stephanie Lau and freshman Kelly Sim.

The Cats withstood a furious comeback from USC in the third round of the tournament. NU led the Trojans by 12 strokes heading into the final day, but as USC shot eight strokes better than the Cats, it took several clutch performances to seal the victory.

The most dramatic one came from Riley in the four final holes of the course. After bogeying the 14th hole, she turned to the 15th, a hole that had given her trouble earlier in the tournament. But Riley hit a perfectly-placed approach shot that rolled down the hill on the green and close to the pin. She finished that par-3 hole with a birdie and shot for the course the rest of the way.

“I wasn’t thinking about it in the moment, but I had a rough go on 15 yesterday,” Riley said. “So bringing it today, I felt pretty good… The rough was really long this week, so something that was big was just playing it smart and just being diligent on your (approach) shot.”

After winning the team’s final invitational before the Big Ten Championship later in April, Lau said the team is where it needs to be as it heads into postseason play.

The team has kept its high expectations after losing in the NCAA Quarterfinals last year. Following a disappointing fourth-place finish in the Big Ten Championship last season, NU has rebounded to become the highest-ranked team in the entire conference.

“It was just a matter of when we were going to put this all together,” Lau said. “This was a testament of that, that we all contributed in some way.”