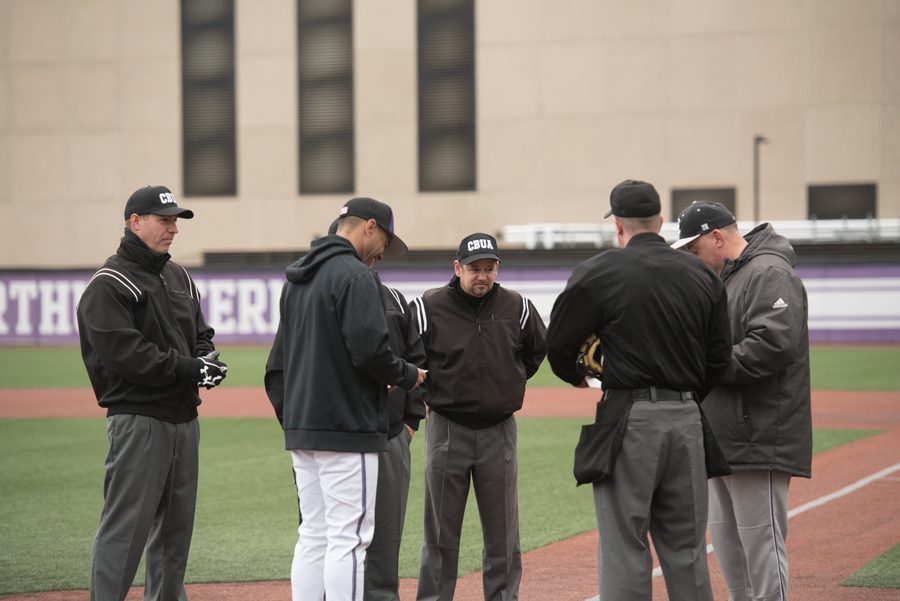 Spencer Allan talks to the umpires. The Wildcats have won nine of the last 10.

But for his 52nd contest in the ballpark, a 6-1 victory for Northwestern over Milwaukee, Dunn did something he had never done before — he ventured to the visitors’ dugout.

“I have actually never been over to that side. I had never warmed up over there,” Dunn said. “The field had a different kind of feel to it. The was no Chinooks gear or logos anywhere. It was definitely a little bit different.”

The stadium is home to the Lakeshore Chinooks of the Northwoods League, the team Dunn competed for the past two summers. Dunn said the trip was like a homecoming, and he was excited to be back in the area.

The Georgia native made the most of his return to his summer home, finishing with two hits, two runs scored and two RBIs. Behind Dunn’s day, as well as keen batting-eyes, timely hitting and great pitching, the Wildcats continued its torrid stretch of play.

NU (15-14, 4-2 Big Ten) start to the game was ideal. Dunn and junior designated hitter Alex Erro drew back-to-back walks, and then advanced to second and third following a wild pitch, putting to runners in scoring position for the Cats with nobody out.

Freshman second baseman Shawn Goosenberg and senior first baseman Willie Bourbon both popped out on two-straight pitches, but a walk from freshman center fielder David Dunn kept the inning alive and loaded the bases for sophomore right fielder Casey O’Laughlin. The sophomore took the first pitch for a strike and then slashed a single up the middle to score Dunn and Erro and put NU up 2-0 on the Panthers (16-13, 5-6 Horizon).

“Casey O’Laughlin really came up big,” coach Spencer Allen said. “That was really big because when you don’t get those runs in, that can be pretty mentally draining on a team.”

After finishing the rally in the first, O’Laughlin started one in the fourth, drawing a four-pitch walk to begin the frame. Junior third baseman Charlie Maxwell then laid down a sacrifice bunt, but a throwing error by pitcher Jack Mahoney allowed Maxwell to be safe and O’Laughlin to reach third.Junior  left fielder Leo Kaplan scored O’Laughlin two pitches later on a groundout to give the Cats the 3-0 lead.

Again, a inning-starting base on balls sparked a run-scoring inning in the seventh. This time, it was back-to-back full-count free passes to Kaplan and freshman catcher Jack Anderson. A passed ball pushed the two runners into scoring position. Jack Dunn then torched a 3-1 pitch into right field for a two-run double. Dunn then came around to score for the second time on the day when Erro ripped a single to center field to push the score to 6-0.

Freshman left-hander Parker Hanks earned his second-straight midweek start, and had arguably his best performance of the season. The Ozark, Missouri, native tossed five scoreless innings with six strikeouts and allowed only two hits and a walk.

Senior sidearmer Danny Katz relieved Hanks in the top of the sixth and threw the next four innings and picked up where Hanks left off. Katz earned his first-career save for his four-inning outing, giving up the only Milwaukee run in the ninth inning.

“I thought our pitching definitely won us the game,” Dunn said. “Parker went out and threw strikes and located all of his pitches. That’s really key, especially in a cold game like that, to have a quick start. And then Danny came in in the sixth inning and shut the door on them.”

Because of construction delays at Milwaukee’s home ballpark and with its temporary home without lights, NU and the Panthers played Tuesday in Mequon, about fourteen miles north of Milwaukee’s campus.

Over the past two weeks, the Cats have now won nine of their last ten, including sweeps against San Jose State and Ohio State in Columbus. This is the first time during Allen’s tenure the team has won nine of 10 games.

“We are getting contributions from everywhere,” Hanks said. “That’s really been the theme of this winning streak we have been on. It’s a whole team effort, and everyone is doing their part.”