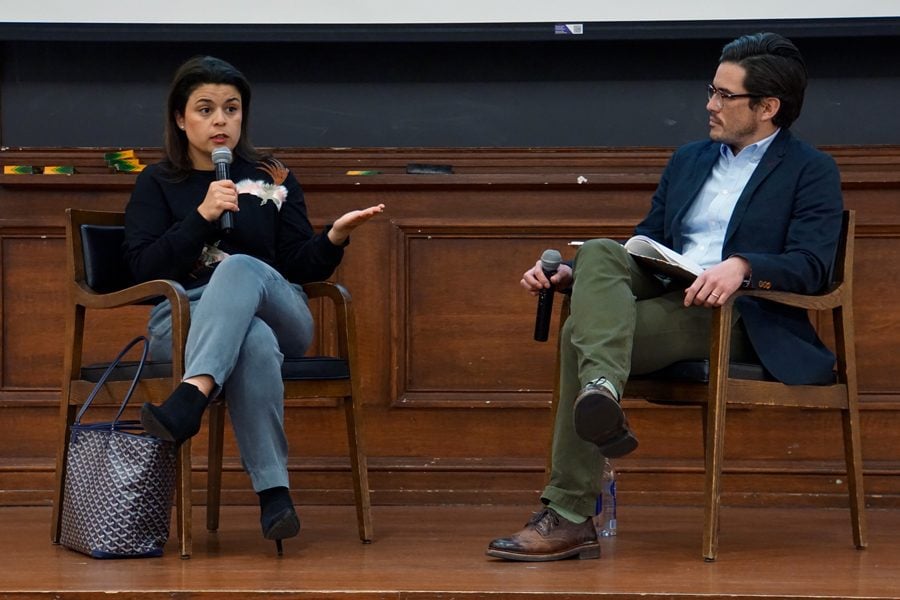 Gabriela Rodriguez speaks at A&O event. Rodriguez, the producer of the award-winning “Roma,” discussed the challenges of working on the film.

Director Alfonso Cuarón is famous for his meticulous attention to detail. But it’s his personal assistant turned producer Gabriela Rodriguez who is on set to ensure his vision comes to life, from organizing travel to balancing the budget to finding the perfect fake dog poop for Cuarón’s award-winning film “Roma.”

“We had maybe about 16 different versions of the dog sh–t, and Alfonso wasn’t approving any of them,” Rodriguez said during a discussion in Harris Hall on Friday. “It wasn’t the right color, or the right texture, and then the dog started eating the dog sh–t. But (producing) is figuring that out. It’s figuring out how to get the right dog sh–t for Alfonso.”

Rodriguez talked about the challenges and the rewards of producing “Roma” in a conversation moderated by Weinberg professor Jerónimo Duarte-Riascos. Last Friday’s event was co-sponsored by A&O Productions, the International Student Association and the Northwestern Department of Spanish and Portuguese, and was preceded by a free screening of the film.

A&O Speakers Committee member Stephanie Uriostegui said the group wanted to bring Rodriguez to campus because they thought she would be an inspirational figure for students to hear from her as the first Latina woman to receive a Best Picture Oscar nomination. Uriostegui said A&O was also trying to make a concentrated effort to bring more diverse speakers to campus.

“We really wanted Latina representation this year, cause I think ‘Roma’ was such a big influence in the Oscars market that we really wanted her to share her story,” Uriostegui said. “That hasn’t been shown with previous speakers.”

During the event, Rodriguez explained that her role as a producer is focused on the day-to-day detail work, as Cuarón’s demands are so specific that someone needs to be on set to supervise production and ensure his conditions are met.

Rodriguez said even compared to her experiences on Cuarón’s other movies, “Roma” was a very demanding film to shoot. Because the film was extremely personal to Cuarón, who based much of it on his experiences growing up in Mexico City, he insisted it perfectly replicate his memories of youth. Rodriguez was often involved in coordinating the set design pieces Cuarón asked for based on his childhood street.

Oftentimes, she would have to say no to him when certain set pieces became liability concerns, like when he asked to include a live bear playing a tambourine during street scenes.

When shooting started, Cuarón did not provide any of the crew or cast members with a script and insisted on shooting the film completely in the order of the script to ensure that the emotions portrayed in the film were spontaneous and genuine. This meant the crew didn’t know exactly what a scene was going to look like until a few days before it was shot and often had to scramble to make sure the technical elements mirrored what Cuarón was looking for.

In one instance, production did not find out until a few weeks in advance that Cuarón wanted pieces of hail that differed in shape to reflect actual hail for a scene that required it. To save money, Rodriguez and her team bought 400 tons of glue sticks and spent two weeks cutting them up and melting them down into unique shapes on top of their other responsibilities during shooting.

When asked if Cuarón was a terrible boss, Rodriguez joked that every single film shoot ends with the crew swearing they would never want to work with him again.

However, she said that she loves him as a person, and even though he works his crew extremely hard, she is constantly impressed by the sheer drive he has for filmmaking, noting that he always works harder than anybody else on any film he makes.

She said that as trying as the production of “Roma” was, everyone on the team became very invested in the story; during the shoot of one particularly emotional scene at the end of the film, the entire crew was uncontrollably sobbing and the set had to be closed so they could have a day to recover.

Ultimately, while Rodriguez admits that working with Cuarón is a taxing experience, his passion for the work makes her feel a sense of accomplishment that is worth the difficulty in the end.

“You feel like you’re finding the cure for cancer every day on set with Alfonso,” Rodriguez said, laughing.

Uriostegui said she really enjoyed hearing Rodriguez’s speak, and loved her humor and passion. She said she was very surprised by how hands-on Rodriguez was as a producer, and found her stories about “Roma” to be reflective of her own experiences as an RTVF student on campus.