Women’s Basketball: Wildcats finish 2019 as runners-up in the WNIT 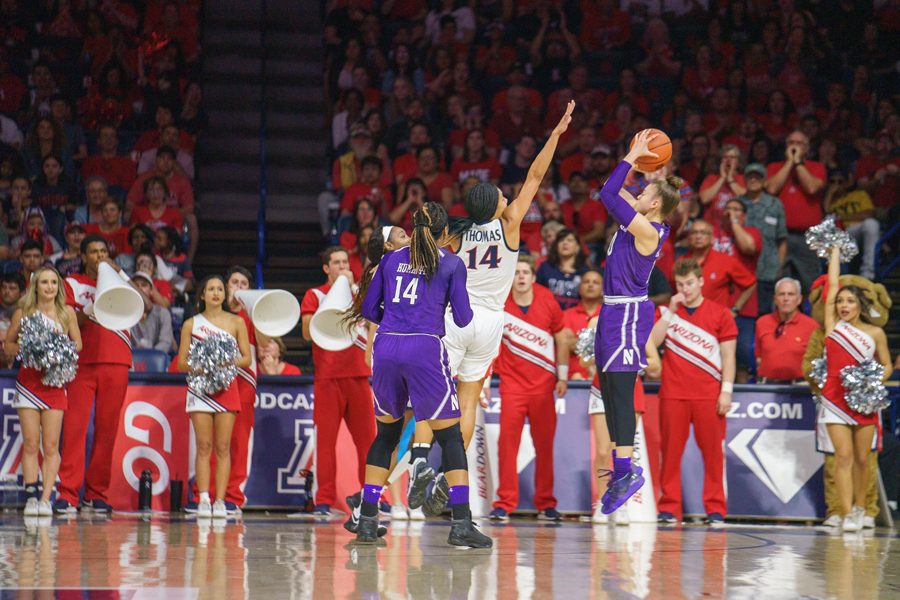 Lindsey Pulliam takes a jumper. The sophomore finished with 14 points in her team’s loss in the WNIT final on Saturday.

The final buzzer sounded 20 seconds after Northwestern scored its 42nd point of the game. Then the Wildcats shook the hands of the victorious Arizona players, received their WNIT runner-up trophy and filed back to the locker room.

Just over an hour later, on the bus ride back to the team hotel, coach Joe McKeown said he didn’t even know where that trophy had gone.

Arizona’s defense foiled what could have been one of the biggest celebrations in NU program history, holding the team to its second-lowest point total of the season in its most important game. The Cats (21-15, 9-9 Big Ten) fell 56-42 in the WNIT Championship game to Arizona (24-13, 7-11 Pac 12) on Saturday, ending a six-game tournament run that featured multiple double-digit comeback wins.

“Northwestern, they’ve been on three road games (in the WNIT) before us,” Arizona forward Sam Thomas said in the postgame news conference. “We knew they could come back. They’ve come back from many deficits… And I think we just really did a good job sticking down in the third quarter, keeping the lead we had and not letting them come back.”

In the final game of the 2018-19 season, NU’s three best scorers combined to shoot less than 32 percent from the field. Freshman guard Veronica Burton led the Cats with 16 points and sophomore guard Lindsey Pulliam added 14, but no other player added more than 4. Playing in the last game of her collegiate career, senior center Pallas Kunaiyi-Akpanah didn’t make a shot from the field.

The Wildcats pulled away from NU in the second quarter, outscoring the team by a 14-5 margin over that 10-minute stretch. Arizona guard Aari McDonald led the Wildcats with 19 points, scoring more points in the game than the Cats were able to score in the entire first half.

McKeown said even though the Cats were facing a similar aggressive defense to what West Virginia ran against them last week, the rigorous schedule they have faced over the last two weeks finally caught up to the team, who got fatigued down the stretch.

“You should be able to get the ball in the lane, get the ball to the post players,” he said. “But they had us playing East-West a lot … We couldn’t get in transition. We didn’t rebound the ball like we were capable of.”

While there won’t be a championship banner raised into the rafters of Welsh-Ryan Arena in November, McKeown said he will ensure the team’s run to the WNIT Championship game will be commemorated by the University. Once the team’s new practice facility is completed, he said he will put the runner-up trophy in a spot the players will see every day.

According to McKeown, the experience of the WNIT run — making dramatic comebacks in in front of road crowds larger than what the Cats typically see in Big Ten play — will put the team in a better position to have success next season.

“They made an incredible run,” he said. “(Winning) at Toledo (after being) down 16. At West Virginia down 18. And to come back in those games… I want them to feel like they want another taste of this.”