At The Merion, teens bridge generation gap through dialogue 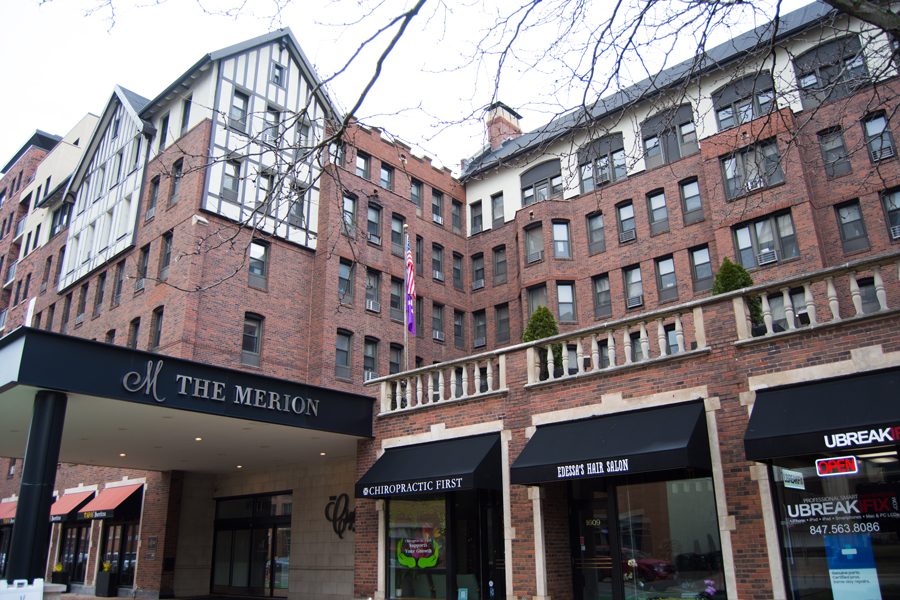 The Merion residential retirement community at 1611 Chicago Ave. Residents participate in a program where they discuss topics like drug use and online dating with high school students.

“How come your jeans have holes in them?”

Standing at the front of the basement room in The Merion on Saturday afternoon, Halle Michael grinned. She had anticipated the distressed denim would prompt questions from the senior residents of the downtown Evanston retirement community.

Another resident had an explanation.

“She bought them at the Goodwill store!” the older woman said, cackling.

More residents chimed in, and Halle Michael kept up the banter, with her twin sister Samara and peers Zach Dickson and Naomi White adding to the repartee.

Together, the four Highland Park High School students make up Fill in the Gap. The program, first started by the Michael sisters, engages Merion residents through discussions on topics like religion, drug culture and online dating.

Session topics come from requests by Merion residents, and almost nothing is off limits — save for maybe politics, because “we don’t wanna do super-controversial topics where everyone is opinionated,” Dickson said.

Saturday’s topic was technology. Over the subsequent hour, the teens displayed slideshow slides with images ranging from rotary telephones to virtual reality goggles, quizzing residents on their technological experiences while sharing their own.

Halle and Samara first started giving these sessions in 2017, when the twins were freshmen in high school (they’re juniors now). Samara Michael said their father suggested the two find some way to engage with the residents of the retirement community, which is owned by a grandparent.

About 10 sessions have followed, with Dickson and White, both high school seniors, joining the Michaels about a year ago.

Technology has proven to be a safe bet, Dickson said; the teens have now hosted three sessions on the topic. Dialogue is the focus of the sessions, and though the teens structure the sessions around PowerPoints and manage the discussions, they say they’re not interested in lecturing.

“We prefer not to talk at them,” Halle Michael said.

Similarly, the teens try to avoid challenging residents’ opinions so not to alienate them, said Samara.

Samara Michael said she shares her experiences with residents so they’ll hear the teen’s “side of the story” and maybe form new opinions.

The sessions have been by and large a success. “The residents like it,” said Merion social director Tammy Potts. “One resident told me that they were ready to let [the teens] run the world.”

Sessions are often followed by impromptu one-on-one conversations between the teens and the residents. At Saturday’s session, resident Helene Moran talked about how advances in hearing devices helped her attend college and graduate school.

“They open up a can of worms,” Moran said on the teens.

Dickson said the sessions have improved his public speaking skills and motivated him to pursue a people-oriented career; he currently plans to study community and nonprofit leadership at the University of Wisconsin-Madison in the fall.

The program has gained attention outside of the retirement community; Samara Michael said she and her sister are often approached by other Highland Park students interested in getting involved. For the moment, they say, they’re sticking with their group of four, with a tentative plan to recruit a new member after Dickson and White leave for college in the fall.

Correction: A previous headline of this story misspelled the name of The Merion.