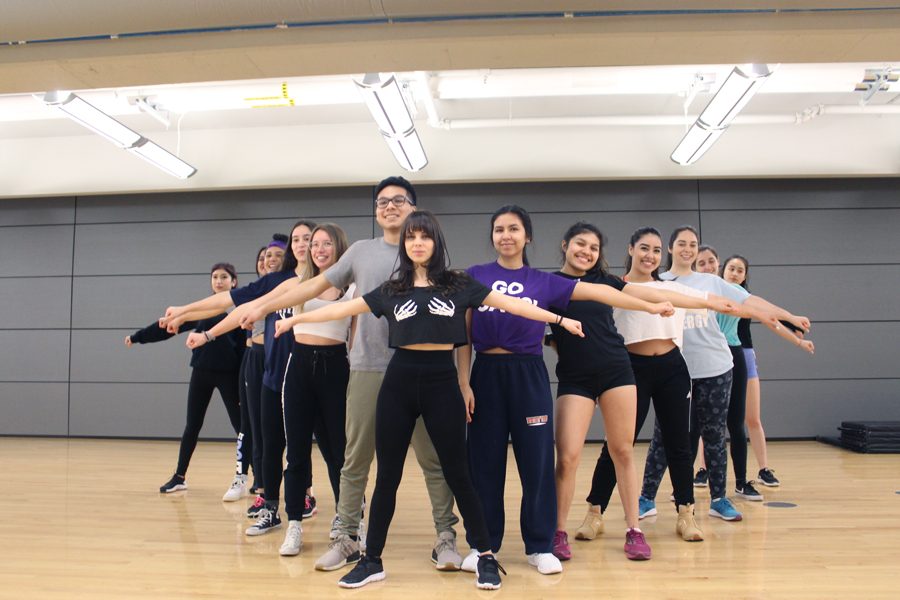 If you’re walking through the halls of Henry Crown Sports Pavilion and you listen closely, you can follow the beat of some reggaeton, bachata or even cumbia to Studio 1A, where the newly created Latin dance group Dale Duro is now spending their time practicing for their first annual dance show in May.

Ariela Deleon and Cecilia Paz founded Dale Duro Latin Dance Co. last June and began the group this Fall Quarter. The group is composed of a 31-member Latin dance team and also hosts dance classes that are open to the public.

“We wanted to create something that would touch the hearts of everybody but was still very specific to Latin dancing,“ Deleon, a McCormick junior, said.

The group practices each of their pieces, or different styles of dances, for about an hour and a half per week. Some members rehearse for up to four and a half hours a week in preparation for the show.

During their rehearsal last Friday afternoon, the energy was palpable as a dozen of the dancers were preparing to finalize a solid minute of their routine. The group, led by Deleon, was moving to the sound of the song “Con Calma” by Daddy Yankee.

When Deleon and Paz started the group last fall, they could only dream of weekly rehearsals in studios with hardwood floors and dance room mirrors.

The group formed because Paz and Deleon felt the lack of dedicated Latin dance on Northwestern’s campus, said Paz, a Weinberg junior. By the time the group began recruiting at the Fall Activities Fair, it became clear that many students agreed.

“In the beginning, it was just us two,” Deleon said, but that changed after the fair, and soon, they had an 80-member listserv to manage.

To better organize and manage their members, Dale Duro expanded to include a five-person executive board and began applying for funding grants. They then went about finding a space in which to rehearse and hold classes, which proved difficult as a new group breaking in on the NU dance scene.

Before securing a studio in SPAC, dancers had to meet in Kresge — where there are no mirrors or hardwood floors.

“Us being new, we had to be introduced to the process of getting space really late in the game,” Deleon said. “So whatever we could get was kind of scraps, but we’re doing it. We’re being resourceful.”

The dance company has withstood these challenges because of their strong community, said Weinberg freshman Jimena Collado.

“We have so much background culture that we can share with each other.” Collado said. “A lot of us may come from immigrant families or a lot of them may come from parents that only speak Spanish or things like that. Those things are small, but they really click.”

A core value of Dale Duro is inclusivity, said Collado, who is a member of the executive board. A big part of the group’s inclusivity is their openness: membership in Dale Duro is not restricted to only the Latinx community. It is open to any “appreciator of Latin culture, music or dance,” Deleon said.

Dale Duro has also been welcomed by various other groups in the arts and Latinx community. A collaboration with Lipstick Theatre kicked off Dale Duro’s dance classes, and Alianza, NU’s Latinx student alliance, even helped promote the group, going as far as inviting them to perform at Festival LatiNU.

In the future, Dale Duro hopes to have classes open every week and teach new styles like plena and bomba. Dale Duro’s main show debuts May 26.

While Dale Duro looks to groups like Ballet Folklórico Mexicano de Northwestern as inspiration for their dance group, Deleon said that dance is just one way to “feel deeply rooted in your culture.”

“When people want to identify with Latinx culture through dance, it’s not just the surface physical expression,” Deleon said. “It’s like you’re feeling the music. You’re feeling all the instruments that have been played for so many years when their parents used to dance.”

– ‘Earthquake Chica’ to premiere this weekend, touch on feminism and Latinx culture