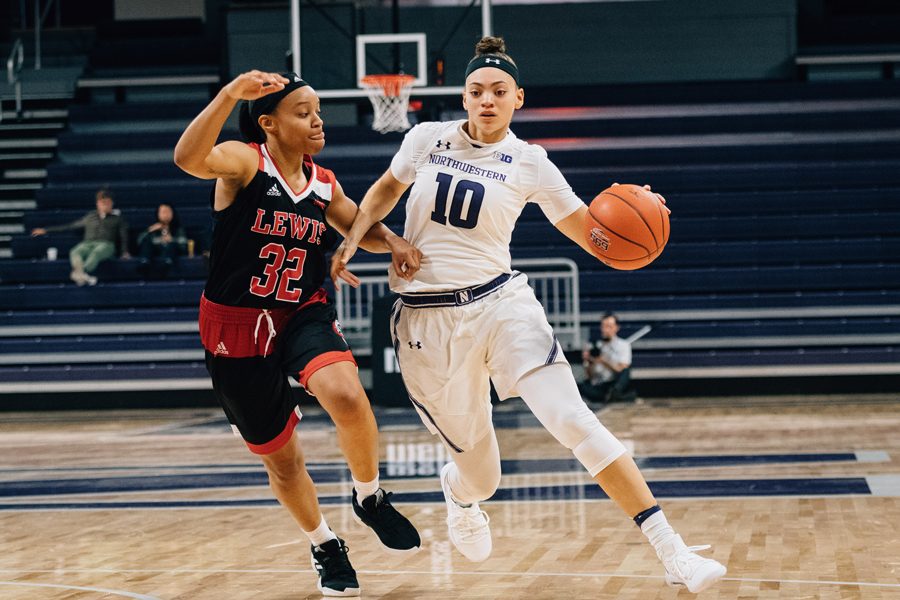 Lindsey Pulliam makes a move. The guard’s expanded game has powered the Cats into the WNIT final.

When former Northwestern assistant coach Tasha Pointer sat down with Lindsey Pulliam at the end of the guard’s freshman season, she felt close enough to the Wildcats’ leading scorer to tell her the cold truth.

Pulliam had to become more than just a pull-up jump shooter. There was no way around it. No debating or second guessing. In the offseason, Pulliam would have to change.

That meeting happened almost exactly a year ago. Since then, Pulliam expanded her game so well that she’s led NU (21-14, 9-9 Big Ten) to the WNIT Championship game.

In the Cats’ 74-69 win over James Madison (29-6, 17-1 CAA), Pulliam led the team in scoring as she typically does. Among her 16 points, she hit a contested floater that grazed the fingertips of the Dukes’ center, multiple shots off the catch and two free throws in the last 20 seconds of the game.

“I work on all the time just being confident,” Pulliam said. “Now I’m stepping up in the big moments.”

In the 2019 WNIT, Pulliam has averaged 19.2 points, 4.8 rebounds and 2 assists, figures that are well above her regular season marks. To put those numbers into context, in the 2018 NBA playoffs, only eight NBA guards had a statline better than Pulliam’s despite playing games that are eight minutes longer and at a much faster tempo.

Her postseason statline is in the same ballpark as those of Victor Oladipo, Donovan Mitchell and Chris Paul.

Pulliam is among the top-performing guards across all tournaments this postseason, posting statistical benchmarks comparable to those of Oregon’s Sabrina Ionescu — a first-team All-American and the projected first pick in this year’s WNBA Draft — and Notre Dame’s Arike Ogunbowale — last year’s Final Four Most Outstanding Player and a second-team All-American.

Pulliam’s level of play is what happened after her coaches worked with her and pushed her to evolve her game.

“The thing we discussed at the end of the year was expanding her jump shot,” Pointer, who now is the head coach at Illinois-Chicago, said earlier in the season. “She takes threes comfortably…Her total game is beginning to shine because she can do more than just pull-up.”

And now she’s one game away from potentially hanging the first-ever banner in Welsh-Ryan Arena. The Cats play in Tucson on Saturday against Arizona, who finished eighth in the Pac-12 this season, with the WNIT championship on the line.

The Wildcats are led by guard Aari McDonald, who averaged 24.2 points per game in the regular season and earned an AP Honorable Mention All-American. She led the team to a 59-53 win Wednesday over TCU, and McDonald will likely face off one-on-one against Pulliam in the championship game.

This won’t be the first time Pulliam has played against a player recognized on All-American ballots. But according to coach Joe McKeown, it could be a career-defining moment for Pulliam and the rest of the team.

“For our players, you never know if you will be in this position maybe ever in your life,” he said. “So you got to enjoy it enjoy the process. And I think they are they’re really focused.”