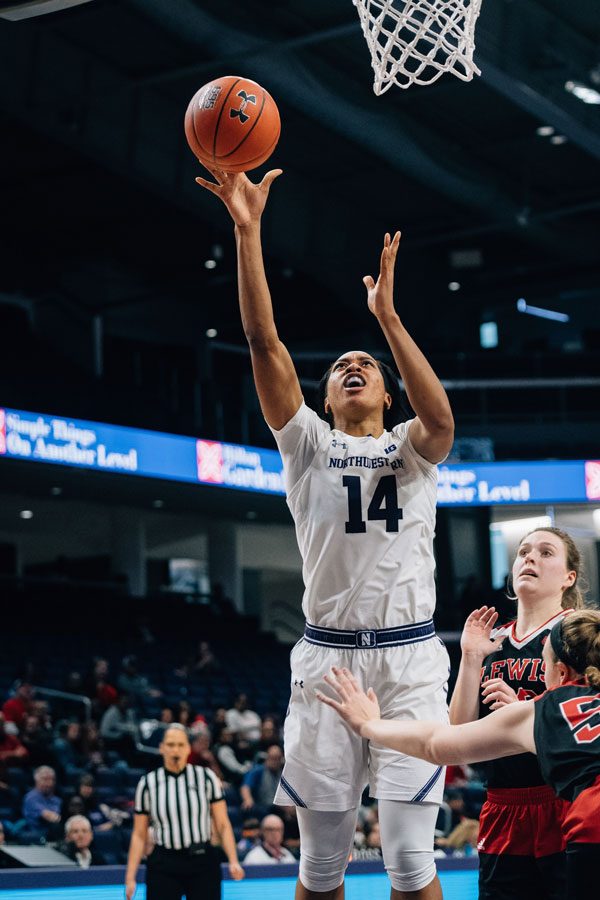 Pallas Kunaiyi-Akpanah goes up for the shot. The forward has been invited to take part in the Chicago Sky’s training camp.

For senior center Pallas Kunaiyi-Akpanah, each contest of her team’s five-game tournament run in the single-elimination WNIT could have been her last in a Northwestern uniform.

Now, after a resounding 74-69 semifinal win over James Madison on Wednesday night, her final game for the Wildcats is definitively set: Saturday, April 6, with a WNIT Championship on the line.

“We have a chance to make history here,” Kunaiyi-Akpanah said. “Definitely not a lot of teams get the opportunity to end their season on a win and that’s the opportunity we have right now, so we’re really excited as a whole unit.”

For the first time in program history, NU will play for a national title, fueled off of the back of four consecutive wins by single-digit margins.

The matchup against James Madison (29-6, 17-1 CAA) played out differently than the Cats’ (21-14, 9-9 Big Ten) nail-biting previous victories, with the team jumping out to an early 19-5 lead. James Madison did find a way to make the game interesting, however, cut the Cats’ 15-point lead with less than five minutes to go in the fourth quarter down to three with seconds left in regulation.

Coach Joe McKeown praised his team’s offensive effort and their resilience as they clung to their lead at the end of the game.

“We got a little sloppy at the end, but we were still able to close it out,” McKeown said. “We moved the ball well, we were able to play inside out. Pallas did a great job of getting the ball in the lane and then kicking it out. And we made big shots.”

NU played one of its most balanced games of the entire season offensively, as all five starting players recorded double-digit scoring figures. The Cats never trailed in the contest, and put pressure on a defensively-talented James Madison team that allowed more than 70 points for only the third time all season.

Sophomore guard Lindsey Pulliam, who played every minute of the game, led NU with 16 points from the floor.

Pulliam once again put her trademark aggressiveness on display and drew fouls. She said the whole team approached the game with an aggressive mentality from the tip, as they knew they couldn’t fall behind early to James Madison, who hadn’t lost a home game the entire season.

“Everybody was just on today,” Pulliam said. “Everybody played their roles. And we were able to find people when they were open. And it’s hard to stop us all when we’re all firing.”

Defensively, the Cats forced 18 turnovers and held James Madison to 33 percent field goal shooting. The Dukes’ two leading scorers, guards Kamiah Smalls and Jackie Benitez, were awful from the floor, combining to shoot 8-for-29. Freshman guard Veronica Burton picked up 5 steals as she frequently jumped into passing lanes, before fouling out late in the fourth quarter.

But after hanging on for a win, NU’s final game is a showdown with Arizona in Tuscon on Saturday at 2 p.m. The game, held at McKale Memorial Center, will be televised nationally on CBS Sports Network.