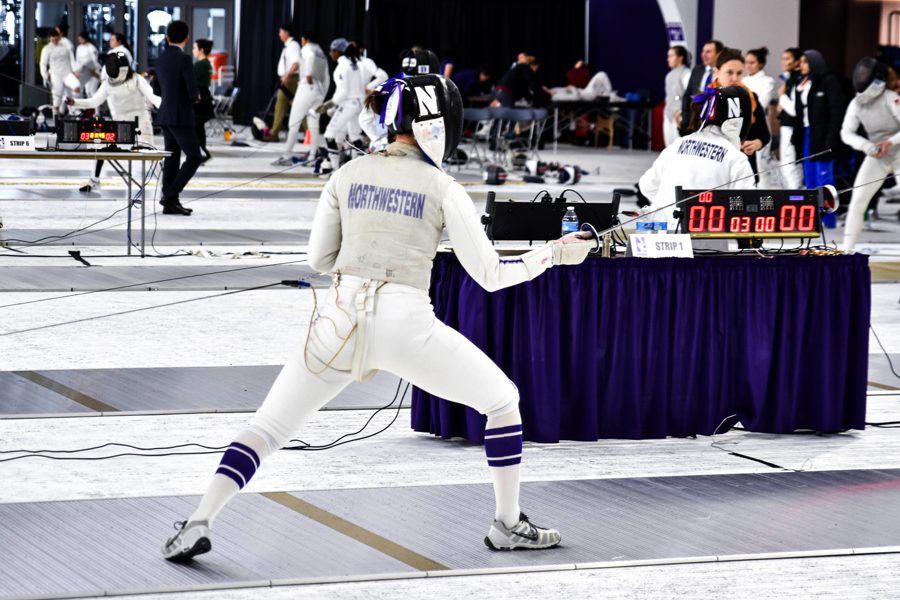 Yvonne Chart readies for a bout. The senior became an All-American for the second year in a row at the NCAA Championships.

Alyssa Chen didn’t think she was doing very well. The freshman foil beat just 10 of 22 opponents over two incredibly nerve-racking days, and finished the weekend with losses against two of the top fencers in the nation.

But when the Sunday’s bouts finally ended, Chen had become an All-American. What’s more — she helped Northwestern place sixth at the NCAA Championships, tying its best-ever finish.

The No. 5 Wildcats capped a banner season two weekends ago in Cleveland with the sixth-place finish. Three of NU’s five fencers earned All-American honors at the meet by finishing top-12 in their respective weapons.

Coach Zach Moss said he felt great about where his team ended up in the standings; the Cats’ last sixth-place finish came 15 years ago. Plus, NU’s five fencers came in at a disadvantage: Six of the Cats’ ranked opponents qualified the full six fencers from Regionals to the championship meet. With each fencer competing individually to win bouts for their school, the missing competitor crippled NU.

“Given the circumstances at NCAAs in terms of the number we had qualified and the kind of uphill battle we faced against the teams that had qualified more than us, it was probably the best result that we could really hope for this year,” Moss said.

No. 2 Columbia edged out No. 1 Notre Dame by one bout to win the overall women’s title, with the Cats beating No. 8 Ohio State by one and trailing fifth place No. 4 Harvard by 26. Each fencer in epée and sabre competed in 23 bouts, and the foilists fenced 22.

Yücel, who finished 8-15 on the weekend, was not happy with her final showing for NU. The sabre came in from an outstanding season, where she racked up the second most wins of any fencer on the team and finished fourth at the NCAA Midwest Regionals. Yücel said she struggled with the stress, and thought she wasn’t in the right headspace for the elite competition. Fencing without a sabre teammate to work with also proved difficult.

She was shooting for an improvement over last year’s 18th-place finish, but had to adjust her personal goals in her last meet for the Cats.

“I know that the bouts that I did win ended up helping my team, so honestly after Day 1 that was more of my concern,” Yücel said. “I was like, ‘Maybe I’m not gonna reach the goal that I want to individually, but I can still help the team.’”

It was certainly a group effort. All five NU fencers finished with between eight and 13 wins. Chart (11-11) earned her second straight All-American honors and Falinska (13-10) joined Chen as a freshman honoree.

Chen said with the huge number of competitors, it was hard to know where everyone stood during the competition.

“At some points I’d feel like ‘Oh shoot, I’m not doing too well.’ And then afterwards, I realized ‘Wow, I made All-American — I didn’t do too bad,’” she said while laughing.

At the beginning of the postseason the Cats had hoped for a top-five finish at the NCAA Championships. Despite falling short, Moss said he’s happy with the season. NU earned its first ever No. 2 ranking, swept weapon styles for the first time at the Midwest Fencing Conference championships and gave two freshmen NCAA Championships experience. The sixth-place finish was a close-to-perfect cap.