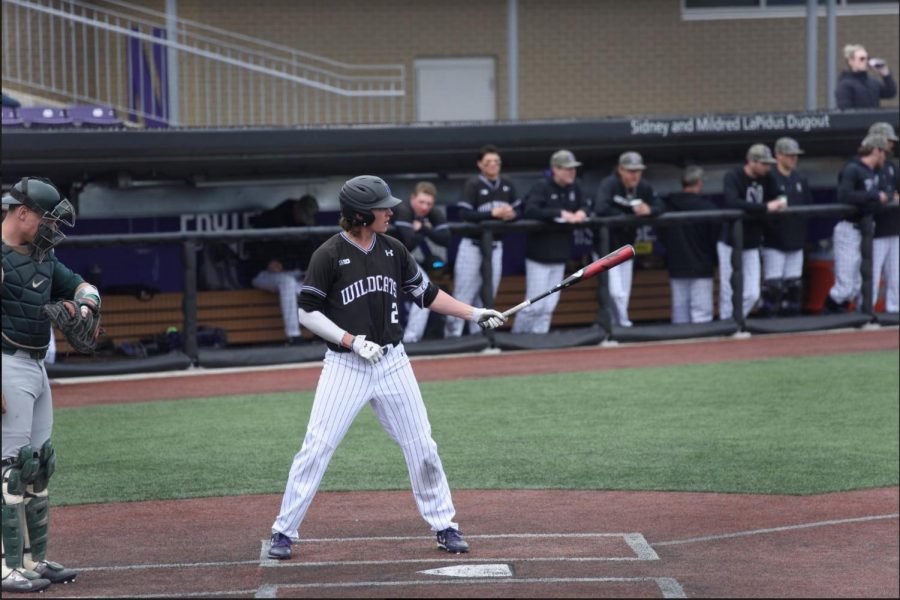 Jack Dunn stands at home plate. After collecting his 200th hit earlier this week, the senior went hitless in the Cats’ loss to UIC on Wednesday.

A day after slapping 16 hits and watching 11 players with the word “Wildcats” across their chest step on home plate in a comfortable victory over Chicago State, Northwestern faced a different team from the Windy City and had a totally different offensive performance Wednesday.

The Wildcats tallied only four hits and drew one walk versus Illinois-Chicago at Curtis Granderson Stadium. On the opposing side, the Flames were not a whole lot better with six hits. With the help of two NU (11-14, 1-2 Big Ten) errors and two home runs, UIC (11-11, 6-2 Horizon) was able to pull out a 4-2 win.

The Flames first got on the scoreboard in the second inning. UIC’s Thomas Smart reached base with one out after an error from freshman second baseman Shawn Goosenberg. On the very next pitch, Alex Dee crushed a two-run shot.

Five innings later, another mistake from Goosenberg led to the Flames scoring a run. After the Cats had tied the game with runs in the fifth and sixth, Dee reached to start the seventh on Goosenberg’s third error of the season.

A sacrifice bunt and a strikeout dampened the probability of Dee scoring, but a two-out walk to Derrick Patrick — UIC’s nine-hitter — allowed the lineup to turn over to the top. Leadoff hitter Matt Bottcher delivered with a double to score Dee and give the Flames the lead. Scott Ota mashed a solo shot in the bottom of the eight to give UIC an insurance run.

NU finally got a runner to cross home in the fifth. Senior first baseman Willie Bourbon doubled to leadoff the inning and then advanced to third on a wild pitch. Senior outfielder Ben Dickey scored Bourbon a sacrifice fly. In the sixth inning, senior shortstop Jack Dunn scored when Goosenberg reached base on a throwing error.

In the ninth, Goosenberg led off with a single, but would not advance any farther. UIC’s closer Alex Padilla shut down the next three batters to end the contest.

“We missed fastballs when we had them to hit. We chased a little bit up in the zone,” Allen said. “They had the count leverage the whole night.”

It was a bullpen day for the Cats — six pitchers straddled the rubber and none threw less than an inning or more than two. Sophomore lefty Ryan Bader pitched two innings and allowed no runs and struck out two batters. It was his third appearance of two-plus innings and one hit allowed or less.

“Anytime you don’t give up any runs is always positive,” Bader said. “I feel like I am starting to make some good progress coming out of the bullpen.”

The win snaps NU’s five-game win streak and marks the first game the team has lost to an in-state opponent this year.

It is also the seventh time in the last eight tries that the Flames have beat the Cats.

“We wanted to stay hot as a team and just to keep winning games,” Bourbon said. “It didn’t work out for us today. But we still have a lot of confidence going into this weekend.”