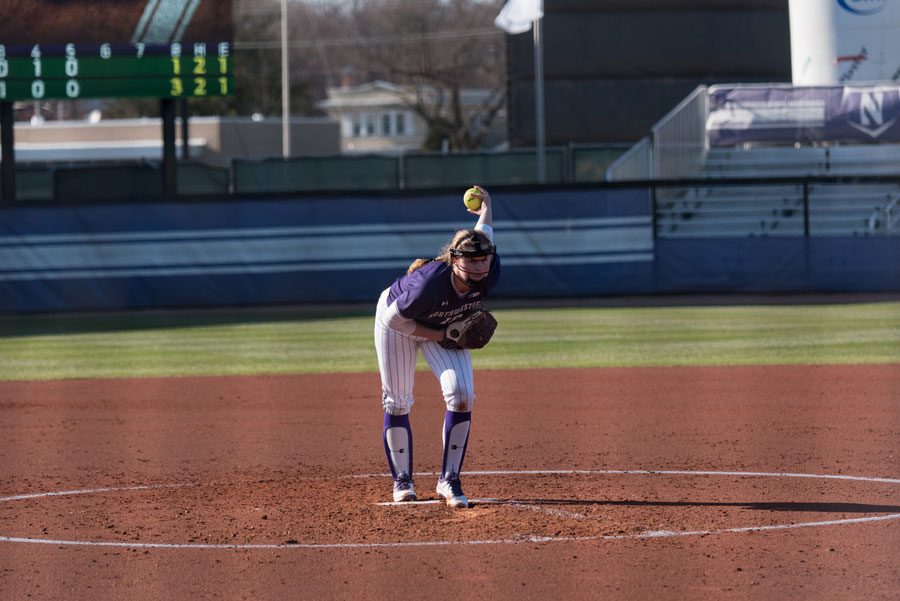 Morgan Newport goes into her windup. The junior made her second start of the season in NU’s win Wednesday.

With the bases loaded and two outs in the bottom of the fifth, junior pitcher Morgan Newport hit a fly ball to deep right field that glanced off the glove of the outfielder, scoring three runs to break a 1-1 tie. Freshman catcher Jordyn Rudd then drove in Newport with a single to account for the final score.

“I was trying to be aggressive,” Newport said. “(Jones) had really great stuff, she had a really great changeup. We just tried to battle that the whole game.”

Newport and sophomore pitcher Kenna Wilkey combined to hold Loyola (17-14, 1-8 MVC) to three hits, with the Ramblers’ lone run coming in the first inning. Loyola put runners at second and third with one out, but Newport limited the damage to a sacrifice fly. She then threw scoreless innings in the second and third before she was relieved by Wilkey.

Meanwhile, NU’s offense was silent until waking up in the fourth. Senior left fielder Morgan Nelson singled, leading off that inning for the Cats’ first hit. The inning came down to senior first baseman Lily Novak’s at-bat with two on and two out, and Novak singled to center to score Nelson and tie the game.

“(Jones) limited our power a little bit, so we had to go to Plan B in how we were going to create momentum and generate runs,” coach Kate Drohan said. “We wanted to put the ball in play and do whatever we could to scratch and claw to get back in the game.”

NU took control of the game in the fifth. Freshman center fielder Skyler Shellmyer hit a one-out double, and a pair of walks loaded the bases. Freshman shortstop Maeve Nelson hit into a force play at home, but Newport’s hit resulted in a three-run error to give the Cats the lead for good.

The Ramblers loaded the bases in the top of the sixth, but Wilkey got a strikeout to keep Loyola off the scoreboard and preserve NU’s lead.

“I’ve been in a ton of big games,” Wilkey said. “Going up there not being afraid is what helps you, and being confident and knowing that you’re going to get that out.”

Newport was making just her second start of the season, and Wednesday was her first time pitching since March 16. She has been the Cats’ primary right fielder as well as one of their most consistent hitters, with a .330 batting average and a .427 on-base percentage.

NU’s win was its fourth straight and ninth in its past 10 games. The Cats have not lost back-to-back games all season.

“We started slow,” Drohan said. “That’s something our team needs to continue to work at, when you come right from class to the field, but we responded quicker today.”