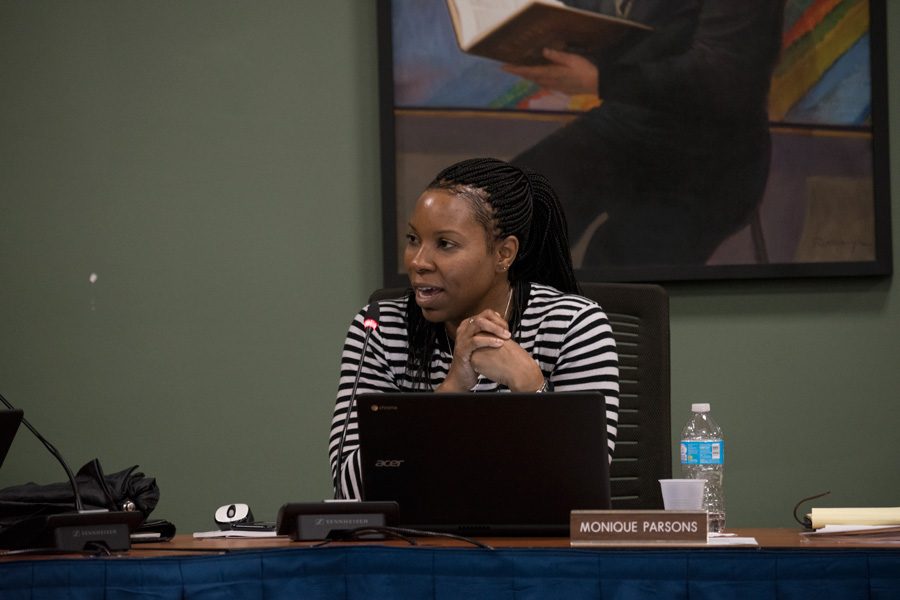 District 202 school board vice president Monique Parsons speaks at a meeting in May 2017.

Evanston elected two newcomers and one incumbent to the Evanston Township High School/District 202 board during Tuesday’s municipal election.

Evanston residents cast 5,190 ballots, with 31.4 percent of voters supporting Parsons, the most of any person up for election. Slaney Palmer received 18.2 percent of votes, trailing Rolewicz and Teterycz, who received 26.7 percent and 23.8 percent, respectively.

Four candidates ran in the race, which had three open seats after Jonathan Baum and Mark Metz opted out of reelection runs and Monique Parsons’ term ended.

Rolewicz said she will seek to address the issues she has seen continuously come up “over and over.” Rolewicz has worked on community organizations including the Parent Teacher Association Equity project, the D65 African American, Black and Caribbean parent group and Evanston CASE.

Teterycz is the director of Northwestern’s Summer Session and college preparation programs and runs educational programming for schools, including ETHS and Chicago Public Schools.

Parsons has served on the board since 2015. In addition to promoting equity within schools, she wants to work toward providing fiscal transparency and accountability and strengthening community engagements and partnerships, according to her campaign website.

The Organization for Positive Action and Leadership, a grassroots racial advocacy group in Evanston, endorsed all three elected candidates. The organization seeks to promote candidates who place emphasis on racial equity.

The newly-elected officials will join the rest of the board in taking on the responsibility of hiring a superintendent and setting educational goals for the schools.