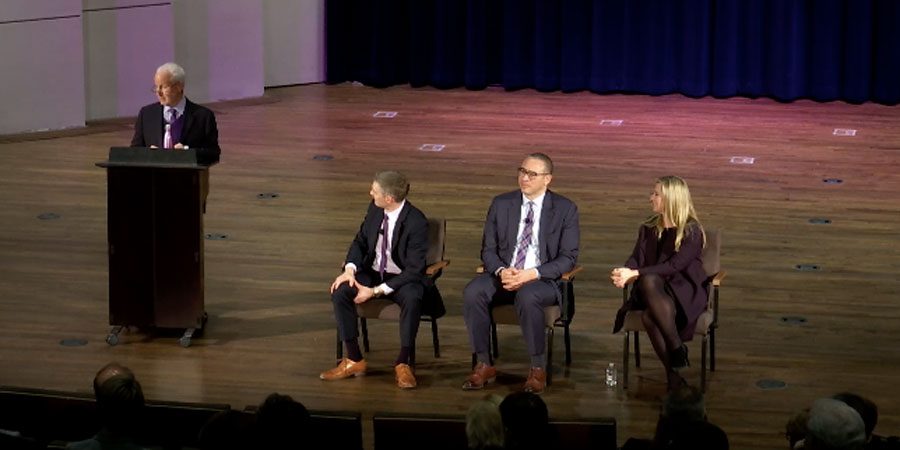 Source: the Office of the President

From left to right: University President Morton Schapiro, vice president for business and finance Craig Johnson, provost Jonathan Holloway and vice president for global marketing and communications Jeri Ward. The panel engaged in a moderated conversation on the Chicago campus.

President Morton Schapiro boasted about Northwestern’s research and apologized for the University’s incorrect information on the budget during a moderated conversation with top administration officials Wednesday morning.

The ‘Conversations with the President’ event, hosted by the Northwestern University Staff Advisory Council on NU’s Chicago campus, featured Schapiro; Provost Jonathan Holloway; Craig Johnson, the vice president for business and finance and Jeri Ward, the vice president for global marketing and communications. The panel discussed the importance of research at NU, the budget deficit and diversity and inclusion initiatives.

Schapiro opened the event by discussing Northwestern’s research profile and membership as one of 62 schools in the Association of American Universities. With the impending opening of the Simpson Querrey Biomedical Research Center, Schapiro said he expects Northwestern to crack the top ten for research university funding from the National Institutes of Health.

Holloway underscored this commitment, telling The Daily in the fall that University leadership has tried to shield the Office for Research from budget cuts. However, Jay Walsh, the vice president for research, said the office experienced “personnel changes” in a November interview.

The president also praised Northwestern’s fundraising, saying that the school has surpassed its $3.75 billion goal in “We Will. The Campaign for Northwestern” and currently sits at $4.35 billion.

“When I was up here a year ago, I made promises that were incorrect,” Shapiro said. “Turned out I lied…when I was up here talking about the budget situation, I was pretty sure we had our arms around it and we didn’t have any layoffs coming. (That) turned out not to be the case.”

Schapiro recounted the day in June 2018 when Holloway and Johnson told him the deficit, which Schapiro had reassured the Northwestern Board of Trustees was under $50 million, was actually above $100 million. He said the upcoming seven-year financial plan developed to combat the budget deficit will impose more frequent accounting, a five-percent limit of endowment withdrawal per fiscal year, and a commitment to research, financial aid and the undergraduate experience, Schapiro said.

With the financial plan in place, Schapiro said the deficit will be back under $50 million by the next fiscal year. In January, he said in an email to faculty and staff that the budget will be balanced by 2021.

Johnson, who took charge of the budget as the deficit rose, said Northwestern will be more efficient with its money going forward and is taking a “pause” on building and infrastructure activity. Despite the pause, the University will maintain its commitment to research and will be issuing modest salary increases this year, with “highly-compensated” employees forgoing raises, he said. Administrators will also more closely analyze the financial impact of its decisions, he said.

“We will be more transparent and talk about those choices and have a conversation,” Johnson said. “When we make decisions, we understand what impact there is going to be on our finances.”

On, diversity and inclusion, Holloway spoke about implementing action items created after analyzing the data of 2017’s Staff Survey, the first one the University had administered. He said his office has started task forces to work on various initiatives, including overall wellness and the LGBTQ+ experience among faculty and staff.

Holloway also said that considering diversity and inclusion does not stop with recruitment. His office is currently engaging in conversations about improving the experience of those with marginalized identities on campus. Realizing that goal will enhance every aspect of the University, he said, from productivity in research to health and wellness.

“Northwestern is a leader in (recruiting diverse candidates),” he said. “That is not enough… We must make sure that they have an experience that sets them up like everybody else to thrive. Not just stumble their way through, but thrive. That’s intense work.”

Related Stories:
– NU on track to balance budget in 2021 fiscal year
– Almost a year later, a look back on how the budget deficit has impacted the University