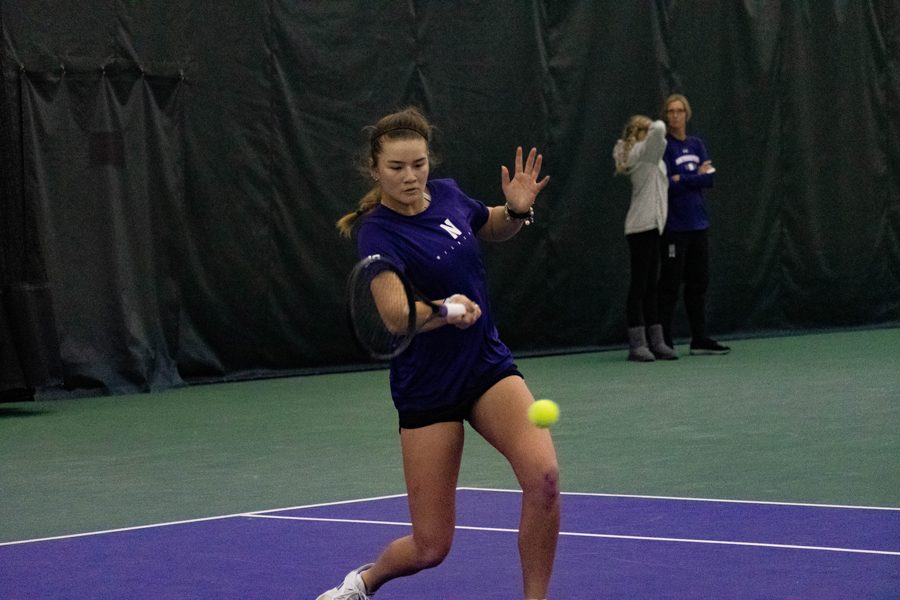 After losing four of its seven matches during a rocky February, Northwestern came into March ready to play and to win.

On its first road trip of the conference season against the Hoosiers on March 9, NU opened with two early match wins to claim the doubles point. Freshman Clarissa Hand, the country’s 37th-ranked singles player, came from behind for a three-set victory in the No. 1 spot, while sophomore Caroline Pozo also won in a triple to give the Cats the win.

A day later later, NU traveled up I-65 to West Lafayette to face the Boilermakers. While Hand fell in straight sets to the 31st-ranked Silvia Ambrosio, the Cats picked up four wins from all of their No. 3-6 spots. Senior Rheeya Doshi and graduate Carol Finke each fell in the first sets of their matches, but rallied to win the next two sets and seal NU’s weekend sweep.

After a two-week break, the Cats traveled to New Jersey on March 27 to face the Scarlet Knights. The duos of Hand and senior Lee Or and sophomore Inci Ogut claimed the doubles point for NU, while all six players won their singles matches.

NU finished off its spring break stretch with a commanding win over the Terrapins on March 29. The Cats did not drop a single set in seven matches. Hand and junior Julie Byrne were both victorious in two sets at the first and second spots, while Pozo won her fifth singles match in a row.

The Cats have been ranked as high as tenth in the nation this season, but fell in the rankings after a Feb. 26 loss to now-No. 9 Pepperdine. Their next match should offer an opportunity to move up again — Michigan, (11-4, 7-0) NU’s next opponent, is ranked No. 18 in the country and is on a six-match win streak.