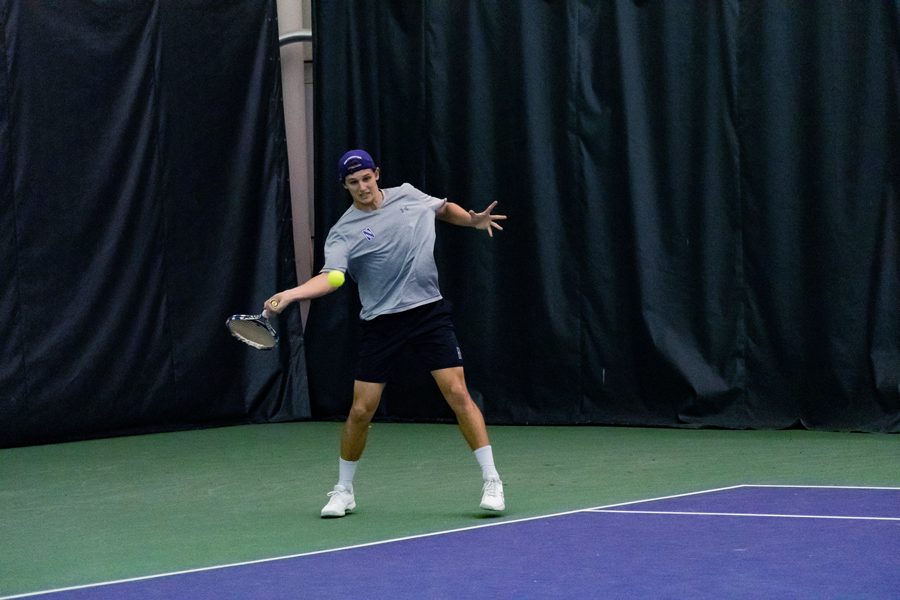 Chris Ephron hits the ball. The junior won both of his singles matches against Iowa and Nebraska.

Northwestern dropped two of three matches in its last weekend of action before winter final exams, but picked up a pair of conference wins this past weekend.

The Cats failed to win a single set against the Fighting Illini. Of the matches that were completed, the doubles tandem of freshman Trice Pickens and sophomore Antonioni Fasano came closest, forcing Illinois’ Vuk Budic and Gui Gomes to a tiebreak before falling short.

Freshman Simen Bratholm and junior Chris Ephron picked up victories against the Red Raiders two days later, but NU once again could not muster enough victories to win the match.

Against the Flames, however, the Cats dominated, not dropping more than three games in any set. Ephron won his match 6-2, 6-0, while Fasano picked up a 6-3, 6-0 victory.

NU’s strong play continued after the break against the Hawkeyes. Iowa won the doubles point, but the Cats swept the singles matches, losing only one set in the process.

Sunday’s match against the Cornhuskers was closer, but NU was once again able to pull it out. The Cats won the doubles point this time, and senior Jason Seidman got NU started at No. 6 singles with an impressive 6-2, 6-0 triumph. Ephron was similarly dominant at No. 3, defeating his opponent 6-0, 6-3.

Nebraska picked up a win at No. 4 singles, with Victor Moreno Lozano defeating Bratholm, but Pickens delivered the clincher for the Cats at No. 5 with a 6-2, 7-6 defeat of the Cornhuskers’ Isaac Nortey.

NU will carry its three-match winning streak to the Great Lakes State this weekend, when the Cats play at No. 18 Michigan on Friday and Michigan State on Sunday.

– Men’s Tennis: Northwestern ready to rebound from loss to Columbia as they play in Indiana and Louisville this weekend