Thuillier: Americans should be able to pass a citizenship test, too 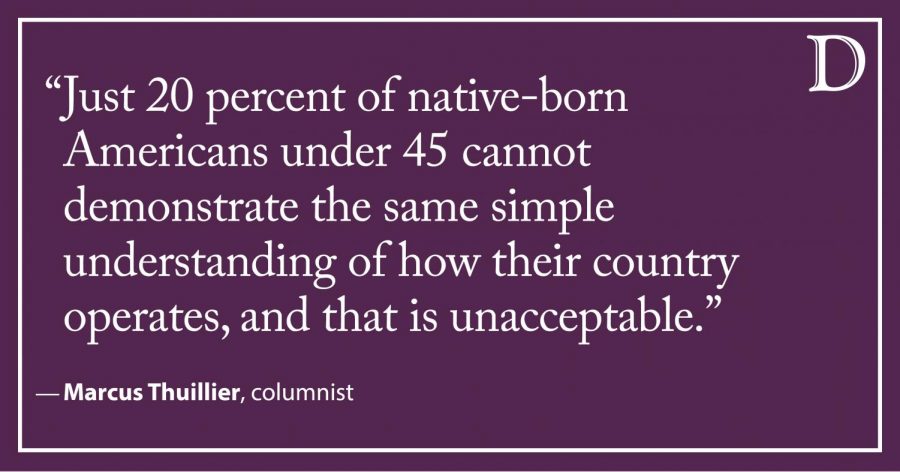 According to a Wilson Foundation study, only 36 percent of American citizens would be able to pass a citizenship test. As I prepare myself to take this test in the future, I find the number to be rather shocking. I’m required to pass this test to prove myself to be “American enough” to be a permanent citizen, yet almost two in three Americans can’t do the same.

This is not a plea for all Americans to learn about the date of ratification of the Constitution or to be able to name one of the two longest rivers in the United States, although those are arguably useful facts. The Center for the Study of the American Dream puts it this way: “the highest incorrect scores consistently concern the U.S. Constitution, and the governmental, legal and political structure of the American republic.” As an immigrant who does not have the right to vote, having people make decisions for this country while lacking an understanding of its structure and rules makes me uneasy.

I’m not OK with a voter who does not know what the First Amendment is to influence what the country’s immigration policies should be, or any other policy. Furthermore, in a time where the democratic institutions of this country are being threatened by those in power, it is absolutely crucial to be aware and educated on those issues in order to protect the foundation of American democracy.

This problem does not necessarily stem from a lack of education or interest: according to the Woodrow Wilson National Fellowship Foundation, about 40 percent of people surveyed pointed to U.S. History as their favorite subject in school. This is relatively unsurprising, as learning about your country and its history is valuable knowledge. However, history is too often taught as a series of facts and dates to memorize for exams. In short, history often teaches you the “what,” not the “why” and the “how.” That shallow idea of history’s teachings is doing us all a disservice, in that we do not learn to question and challenge the path the United States has taken up to this day. The American people, and especially people from our generation, need to be able to think more critically about the social implications and political organization of this country if we are to make educated and fair choices.

One possible solution would be to complement the history component of the courses with a civics element. Conventionally speaking, civics education goes beyond the facts and figures of history and attempts to teach students how to engage with the democratic process. Putting an emphasis on these classes could expose young Americans to activities modeling that process, efficiently preparing them to engage in those activities later in life as adults. A whole 31 states require a year of U.S. history in order to graduate, while only eight require a year-long civics or government class. That number should be 50 for both. Requiring all students to take one year of U.S. history and civics would be the bare minimum to ensure that the active citizens of the future are able to make educated choices when it comes to American affairs.

The United States requires immigrants to prove their knowledge of the country’s history and understanding of its institutions, which is a reasonable and fair demand. However, just 20 percent of native-born Americans under 45 can demonstrate the same simple understanding of how their country operates, and that is unacceptable.