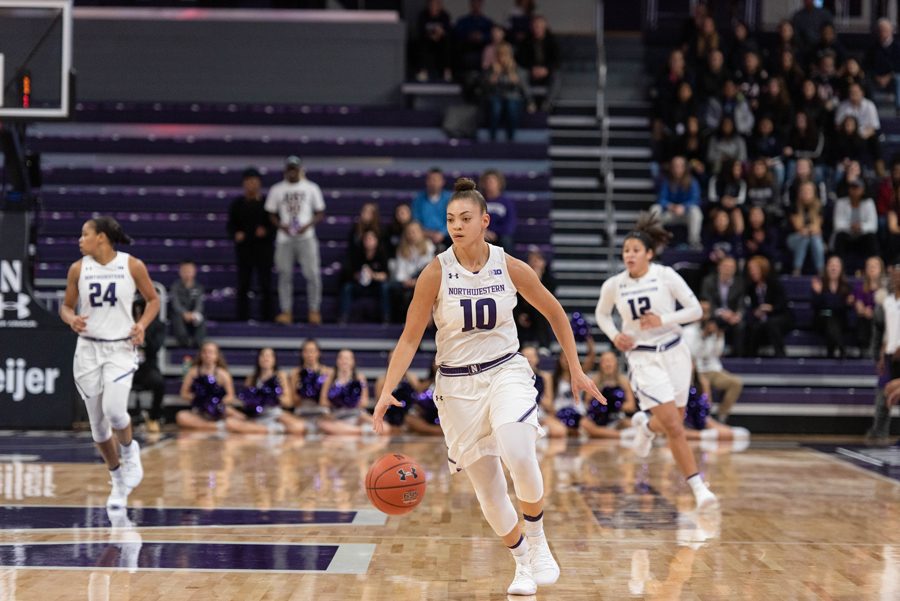 Lindsey Pulliam brings the ball up the court. The sophomore is playing some of the best basketball of her career this postseason.

Joe McKeown’s only previous Elite Eight run means so much to him that he’ll mention it at just about every press conference he gives. It happened in 1997 when he was coaching at George Washington, but he still brings it up whenever he gets the chance.

Pacing the sidelines Saturday against Ohio, McKeown was reminded of the feelings he had during that run, even if his Northwestern team was playing in the Elite Eight of the WNIT instead of the NCAA Tournament.

“We played Notre Dame in the Elite Eight to go to the Final Four in the NCAA Tournament, and I just remember how excited (I was),” he said. “That’s a little while ago, but you still remember and then how hard it was when you got beat.”

In 1997, George Washington lost 62-52 to the Fighting Irish, ending what was the longest postseason run of McKeown’s coaching career. But 21 years and one coaching move later, the man who has coached college basketball for 33 seasons is finally advancing to the Final Four of a postseason tournament.

In addition to being a notable run for McKeown, this is the first substantial postseason experience for NU’s young core of players. Sophomore guards Lindsey Pulliam and Jordan Hamilton came to Evanston as freshmen with potential, but they struggled driving the offense as starters right off the bat. The Cats finished 12th in the conference last season and were one of the only teams in the conference that relied so heavily on two first-year players.

Since then they have both taken significant steps forward. Pulliam finished her sophomore season with the Big Ten’s First Team recognition, and while Hamilton struggled with injuries this year, she increased her scoring average and her shooting efficiency. Against Ohio, Pulliam hit two late free throws with the team up just one point, the first time she had been in such a position in a postseason game.

“We just keep pushing, no matter what the score is,” Pulliam said. “We’re just gonna keep going at it. Because we know that we can come back and win the game. We have a chip on our shoulder.”

Those are lessons McKeown has said he tried to teach when he threw Pulliam and Hamilton “into the fire,” starting them in every game when they were freshmen. According to McKeown, last season’s Big Ten losses prepared the team to go .500 in conference play this year.

After losing seven conference games this year by single digits, the Cats have made fourth-quarter comebacks in each of their last WNIT three wins, finally converting down the stretch to finish games. In this tournament, Pulliam is playing some of the best basketball of her career, averaging 20 points on an efficient 47.1 shooting percentage.

With the chance to play for a championship and potentially put up the first banner in Welsh-Ryan Arena, McKeown said this extended run is a much-needed step in the program’s improvement.

“To be in a final four of a 64-team tournament, it’s great for them,” McKeown said. “It’s great every (extra) practice they get, every environment like this they plan in… It’s just an incredible experience for them. And only positive things going into next year.”