Parents and students involved in college admissions scandal are not victims 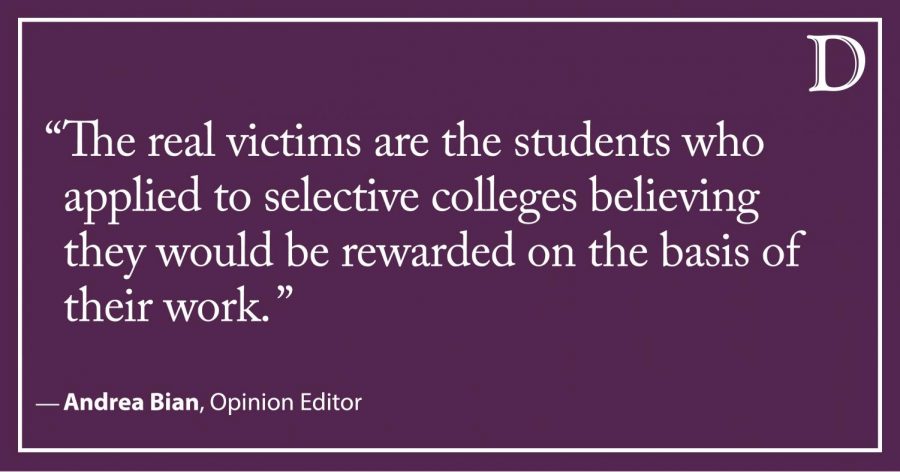 On March 12, The New York Times broke a story detailing the elaborate methods wealthy families used to bribe college coaches and standardized test proctors to increase their students’ chances of gaining admission to elite colleges. According to an investigation, some parents paid as much as $1.2 million to coaches to designate their sons and daughters as false athletic recruits; others paid proctors to allow a tutor to sit with their student and provide correct answers during standardized tests.

The FBI launched an investigation titled Operation Varsity Blues, which eventually culminated in the arrests of celebrities, parents, coaches and others involved in the fraud. The news stunned many Americans, on and off college campuses.

Indeed, the news was stunning in its inclusion of multiple prestigious colleges — from Yale to Georgetown to University of Southern California, the scandal reached all corners of the country. It was unsurprising, however, for many students who have long been aware that the college admissions process was never a meritocracy. Wealthy families who skirted the system illegally through bribes brought attention to similar unequal but legal systems that have long favored the rich: legacy admissions, for example, or significant donations that can increase students’ chances.

The students involved in this case were not charged; the Justice Department noted that some of them may have been unaware that their parents bribed coaches or had them falsely designated as athletic recruits to get them into college. However, some methods exposed in the scandal clearly required students’ knowing participation. Students who falsely claimed they needed extra time for their SAT and ACT tests due to a “disability,” with the help of their parents, were well aware of the process. So were students who posed on rowing machines to appear as crew recruits, despite having never rowed a day in their lives. Also aware were students who specifically traveled to take their standardized tests at test centers that allowed them a proctor to provide answers and large amounts of extra time.

Social media sites have seen a reasonable amount of backlash toward the families on multiple levels. But much of the media coverage has interestingly chosen to portray the people involved, particularly the students, as victims — saying that parents who fall for elite college culture will go to great lengths to achieve the end goal, ultimately disadvantaging their students. Other critics have focused on the accusation from children that masterminds of the scheme solicited their “naive” parents.

Portraying the parents involved as only wanting the best for their children does a major disservice to parents who don’t use bribery or fraud to do the work for their kids. It also does a disservice to every student and family who attempts to earn admission to college fairly. Not participating in bribery doesn’t make parents any less caring or supportive; by contrast, in fact, it makes them better parents with better morals.

Claiming that the families involved were “solicited” or “persuaded” outside of their own will also removes the blame from the very people who instigated the scandal by making the active choice to pay the money in the first place. Students, regardless of whether they knew about the fraud — and evidence suggests that many of them knew — are not the victim in this situation. If they face consequences and expulsion, it is due to a blatant disregard of rules and regulations that every student is supposed to follow.

People have long criticized systems like affirmative action for “taking away” spots from hardworking students. The scandal, however, is just another example of how the system is skewed to ensure affirmative action — for the rich. Countless students benefit from their families ability to legally work the system to gain admission to the most selective universities in America. They can afford costly high school resources, enjoy drastically increased admissions rates for legacies, and engage in informal bribery through large donations.

Last November, I wrote a column about legacy admissions being the problem at elite colleges, not affirmative action. The exposure of the college admissions scandal adds another layer of emphasis to my original point — many white, wealthy people benefit and have always benefited from the college admissions system. The idea of a meritocracy — that students will be admitted solely based on their demonstrated ability — is impossible unless large sums of money make no difference in a students’ chance of admission, and that isn’t a reality.

Naiveté is no excuse for an active choice made by parents and their children. The real victims are the students who applied to selective colleges believing they would be rewarded on the basis of their work.

Andrea Bian is a Medill first-year. She can be contacted at [email protected] If you would like to respond publicly to this op-ed, send a Letter to the Editor to [email protected] The views expressed in this piece do not necessarily reflect the views of all staff members of The Daily Northwestern.