Women’s Basketball: Northwestern erases an 18-point deficit, advances to the Elite Eight of the WNIT 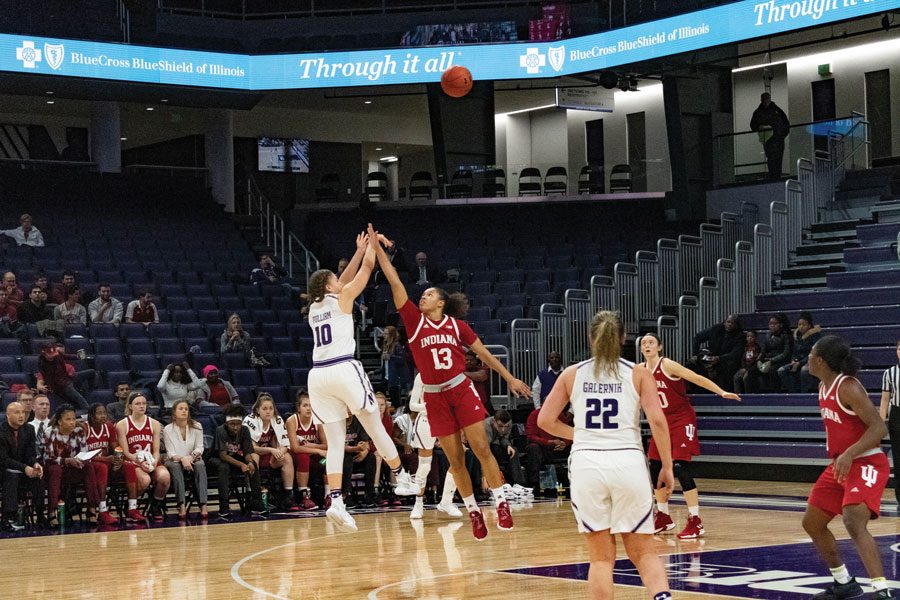 After coming back from a 16-point margin to defeat Toledo in the second round of the WNIT, no lead seemed too insurmountable for Northwestern — and that once again held true Wednesday.

Despite not having a lead for the first 39 minutes of their Sweet 16 matchup against West Virginia, the Wildcats battled. With just over 40 seconds left, sophomore guard Lindsey Pulliam hit her signature mid-range jumper to give NU (19-14, 9-9 Big Ten) its first lead of the game.

“That’s just what I work on,” Pulliam said. Senior center Pallas Kunaiyi-Akpanah “set a great screen for me and the shot went down.”

After a Mountaineer turnover, Pulliam added a free throw to extend the lead to two, but West Virginia (22-11, 11-7 Big 12) had one more chance to win the game. On an inbounds play, freshman guard Sydney Wood tipped the ball away from a Mountaineer player and fellow freshman guard Veronica Burton dribbled the clock out as the Cats won, 56-54, and advanced to the quarterfinals.

Similar to its second-round matchup, NU didn’t get off to a fast start. The Cats scored nine points on a dismal 4-for-14 shooting in the first quarter. Early in the second quarter, coach Joe McKeown was forced to call a timeout as the Wildcats faced an 18-point deficit.

But in the final eight minutes of the second quarter, NU went on a 16-3 run to cut the Mountaineer lead to five. NU’s offense success was due, in part, to the play of Burton and Kunaiyi-Akpanah, who combined to score 12 of the Cats’ 16 points during that run.

Defensively, NU came out of the timeout in a full-court press and the pressure rattled West Virginia, who went 3-for-12 from the field in the second. After committing just one turnover in the first ten minutes, the Mountaineers gave the ball away six times in the second quarter.

Throughout the second half, the Cats stayed in the game and looked poised to take the lead before the Mountaineers countered with timely shots. But finally, with just over a minute and a half remaining, junior forward Abi Scheid hit a 3-pointer to cut the lead to one before Pulliam hit her jump shot.

Like the end of the first half, NU prided itself on defense in the second half, forcing eight turnovers. West Virginia failed to score in the final two minutes of the game, allowing the Cats to score the game’s final six points. Kunaiyi-Akpanah was also dominant on the glass, grabbing 19 rebounds — including 10 offensive boards — in the game.

“She just battled every person in a West Virginia uniform,” McKeown said. “Especially in the fourth quarter when she came back in… she just went after every loose ball.”

With the win, NU will play at home on Saturday against the winner of Ohio and Western Kentucky with a chance to advance to the WNIT Final Four.

“(It’s) unbelievable that we have a chance to play at home,” McKeown said. “We’re in the final eight and there’s so much that’s been earned, nothing’s been given to us in this tournament … Our players have earned the right to play at home.”