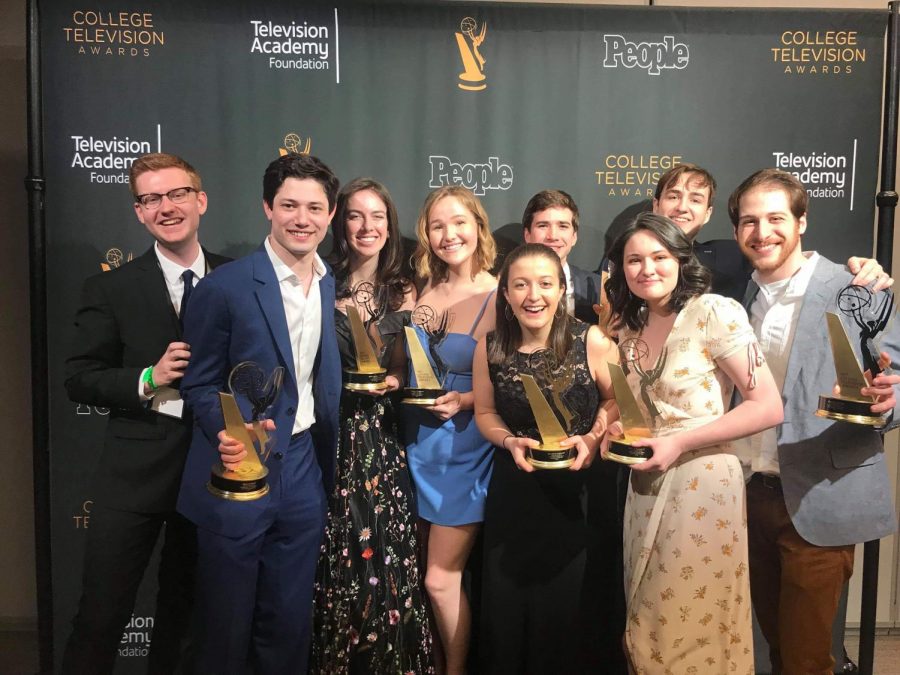 Members of The Blackout pose for a picture after winning the College Television Award in the Variety category. The award ceremony took place Saturday in Los Angeles.

For movies, there’s the Oscars. For theater, there’s the Tony Awards. And for college television, one of the most prestigious honors is the College Television Awards.

The 10 NU students and alums nominated for the segment made the trek to Los Angeles for the weekend, where they participated in networking sessions and panel events with top executives and talent in the industry. On Friday, The Blackout members also attended a taping of “America’s Got Talent,” where they spoke with head producers and celebrity judges Howie Mandel, Simon Cowell and Gabrielle Union, said Communication senior Jake Daniels, a head writer for The Blackout last year.

The weekend culminated in the 39th College Television Awards ceremony, where The Blackout was named the winner in the Variety category. The NU group beat out fellow nominees The 37th Annual EVVY Awards from Emerson College and SCADurday Night Live from Savannah College of Art and Design.

Communication senior Alex Fecteau, a head writer of The Blackout, said the group was shocked when its name was called and that the result was “unexpected” — especially after seeing the work of the two other nominees.

“When they first called our name I wasn’t sure if I heard them right. I was like, ‘Is this like a ‘La La Land’ moment where we all jump up and we realize they were calling the EVVY Awards or something?” Fecteau said. “But we were all screaming and dancing and ran up onstage. It was a completely surreal moment.”

For winning its category, The Blackout received a cash prize of $3,000, which will be invested back into the group, said Communication senior Max Kliman, a producer of the show.

Kliman said the award will hopefully draw more attention to The Blackout and make more students excited to get involved. He said he hopes the student-run late-night show will get “bigger and better” over time.

But more than anything, Kliman said this recognition serves as validation for The Blackout, a group that started in 2015 and has since distinguished itself in NU’s comedy scene for welcoming anyone into its organization.

“We really believe in this idea of inclusivity and collaboration and really letting people do anything they want to do,” Kliman said. “Winning this award really just proved to us that that’s the best way to make this kind of content — not having a crazy hierarchical system… but really letting people come in who are passionate about it.”