Men’s Basketball: Barret Benson becomes third player to announce he will transfer in past week 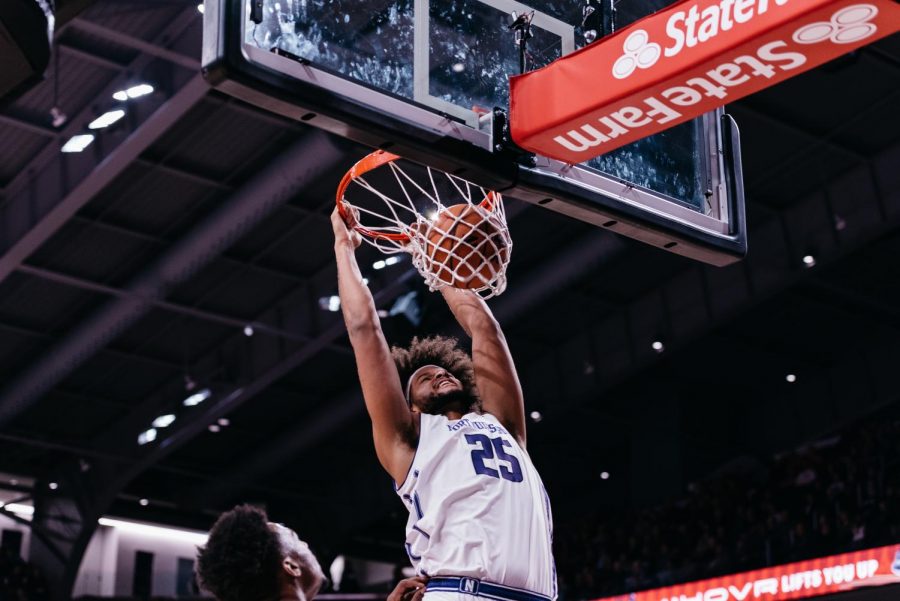 Barret Benson slams home a dunk. He announced his decision to transfer Tuesday.

For the third time since Northwestern lost to Illinois in the Big Ten Tournament, another player has announced he is transferring. Junior center Barret Benson announced that he will transfer out of the program in a post on Twitter on Tuesday.

“I am extremely thankful for my time at Northwestern, I will forever cherish the people I’ve met, the places I’ve been, and the memories I’ve made here as a Wildcat,” Benson said in the post. “I would specifically like to thank Coach Collins and the entire staff as well as Dr. Phillips and the administration. With their belief in me, I was able to have an undeniably amazing experience at Northwestern. I’m in a position where I will be graduating early and begin to explore other options to finish out my career. I will always be a Wildcat.”

Since Benson is graduating early, he will be able to play immediately as a graduate transfer. He has one more year of eligibility left.

With Benson’s transfer, none of the members of the Wildcats’’s 2016 recruiting class remain. Fellow classmates Isiah Brown and Rapolas Ivanauskas transferred after last season. Benson finished his career averaging 2 points per game and 2.3 rebounds during his three years at NU.

“We are excited for Barret to begin his next chapter in life and in basketball,” coach Chris Collins said in a statement. “For him to graduate in three years from Northwestern is an amazing accomplishment and speaks volumes to his work ethic and dedication. He is an incredible young adult who is sure to be a successful in life in whatever he pursues. He will always be a Wildcat and we wish him nothing but the best.”

During his Cats career, Benson played in all 96 games and started 14. In his freshman year, Benson posted a 59 percent field goal percentage, the best of his career. As a sophomore he gained more playing time, averaging almost 10 minutes per game.

This year, Benson recorded the lowest field goal percentage of his career, shooting 40 percent from the field. His best game came against Binghamton, when he played 27 minutes and posted a double-double with 12 points and 14 rebounds.