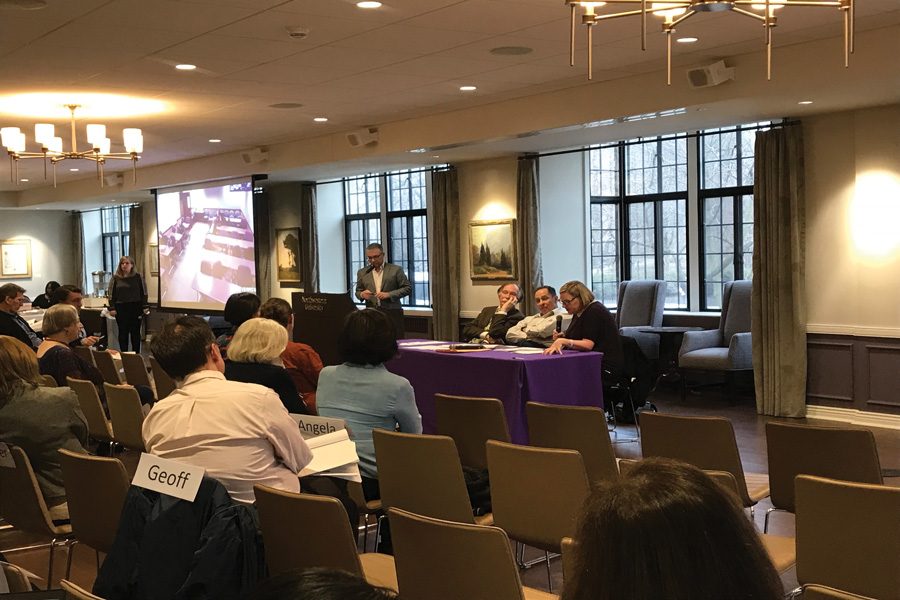 Richard Kieckhefer, Andrew Koppelman and Laura Beth Nielsen talk on a panel about the implications of academic freedom during Faculty Senate on Wednesday. The academic freedom statement in the Faculty Handbook is up for review this year.

The academic freedom statement in the handbook is the 1940 statement from the American Association of University Professors with slight amendments from 1970. AAUP has updated its statement since then, said Faculty Senate President Baron Reed, but the University hasn’t done the same.

The revision of the statement would ideally be completed before the end of the academic year, said religious studies Prof. Richard Kieckhefer, the chair of the Faculty Handbook Committee. The committee will take into consideration the discussion, Kieckhefer said, before writing a set of proposals to the Senate to revise the statement. The revision will then be sent to central administrators before the Faculty Handbook can be changed.

However, the language that will be included in the revision is still up for debate.

The current statement says that faculty are “entitled to full freedom in research and in the publication of the results … but research for pecuniary return should be based upon an understanding with the authorities of the institution” and that professors should “be careful not to introduce into their teaching controversial matter which has no relation to their subject.”

Law Prof. Andrew Koppelman, who led a panel with Sociology Prof. Laura Beth Nielsen before an open discussion, said the revised academic freedom statement should include language similar to that used at the University of Chicago. UChicago’s policy states that “a person’s subjective belief that a behavior is hostile” isn’t grounds for administrative intervention.

Koppelman, who said he uses a racial slur in his class to demonstrate the potential negative effects of language — and therefore the importance of free speech — worries that the language the University currently uses puts him at risk of repercussion from the administration. Adopting UChicago’s definition of academic freedom, he added, would protect him from being sanctioned if a student in his class was offended.

Though Nielsen supports updating the statement as well, she said she doesn’t want to adopt language from UChicago, and would rather write an entirely new statement that better fits the challenges Northwestern faces and adequately balances protecting students and faculty.

“Our students live here,” she said. “Some speech is not just speech. Some speech is harm, and context matters for figuring that out.”

The definition and implications of academic freedom have been a subject of contentious debate since University administrators decided not to dismiss visiting scholar Satoshi Kanazawa, an evolutionary psychologist whose past work has been criticized as racist and misogynist, despite students’ calls for his removal.

Koppelman said he likes that the University took the position to keep Kanazawa on campus, adding, “if you can throw people off campus for that, no one is safe.”

However, Faculty Senate should argue that all faculty should be tenure-track, removing the need for extra protections for non-tenure eligible faculty, said Spanish and Portuguese Prof. Jorge Coronado.

“I want to stress how much this isn’t about (non-tenure eligible) faculty being brave,” Coronado said. “If you can be fired, you have a very different relationship to the University than I have.”

Although senators agreed that non-tenure eligible faculty are in need of more protection, Nielsen said, faculty should be more cognizant of how students are being protected by the statement as well.

“The debate is about how protective it needs to be,” she told The Daily. “My question is ‘Protective of whom?’ We need to take into account the ability of students to learn, but all the talk of protection is about ourselves.”