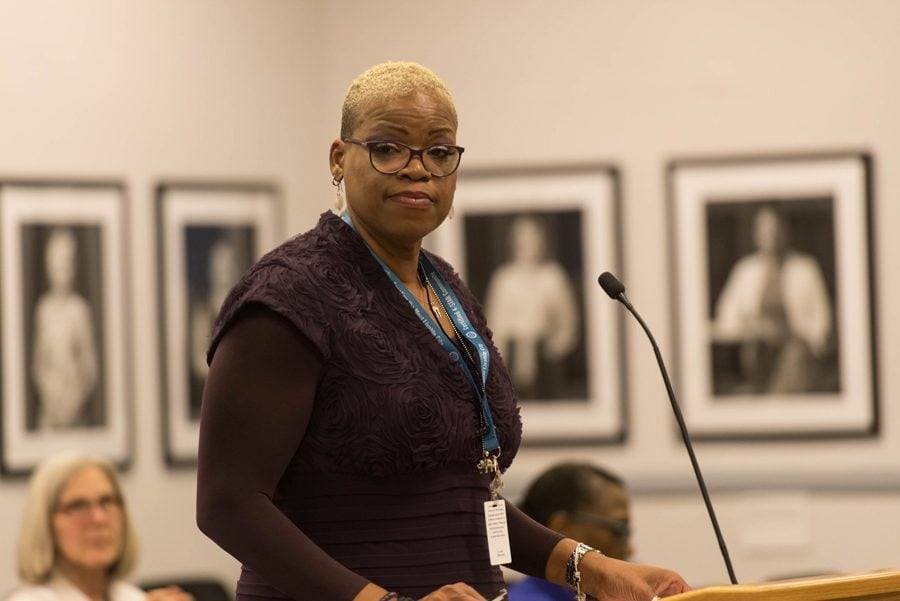 Health and Human Services Director Evonda Thomas-Smith speaks at a city meeting. Thomas-Smith said the YWCA has the capacity to provide the domestic violence crisis intervention services and 24-hour coverage the city is currently lacking

The six-month service agreement, which will cost the city $75,000, will supplement current victim services with training for law enforcement, 24-hour crisis intervention and two beds for domestic violence victims, according to city documents.

In November, when the city was deciding its fiscal year 2019 budget, Evanston residents expressed concern about moving services away from the city. The city approved the funding of two current, full-time victim advocate positions for six months, eliminating one vacant position. The budget proposed entering into a contract with the YWCA to provide around-the-clock crisis response for domestic violence victims. Monday’s agreement materialized that suggestion.

Evonda Thomas-Smith, director of the Health and Human Services Department, said the YWCA would complement the city’s current programs, while providing the comprehensive services the city is unable to with only two full-time advocates.

Thomas-Smith said the city does not have 24-hour coverage or crisis intervention, but the YWCA has the capacity to provide both.

Although the contract does not specify the provision of new services, the YWCA would use the city’s funding so their staff can continue providing services, said Karen Singer, president and CEO of YWCA Evanston/North Shore.

“The big piece is that we are at capacity,” Singer said. “At our courthouse, we handle almost 400 orders of protection every year. And the funding is critical to all of our services, but we’re at capacity so we can’t add services unless we have the staff to do it. We can’t provide additional services. Our counselors are maxed out and there just isn’t the capability or the capacity.”

On top of police training and 24-hour service, Ald. Peter Braithwaite (2nd) was in support of the new contract because the YWCA provides intervention programs to deal with perpetrators.

“It’s the work with the actual abusers, which happen to be men, and we’re not directly doing that,” Braithwaite said. “(YWCA) brings that to the table.”

Ald. Ann Rainey (8th) emphasized the need for continuing domestic violence training within police departments. She said domestic violence is a prominent item of arrest on police bulletins, as frequent as DUIs.

“I know for a fact that a lot of these police officers aren’t following through with the domestic violence, and I’d like to see that training, including keeping them safe and out of trouble, be more consistent,” Cook said.

While the YWCA is an “irreplaceable and wonderful” service to the city, Rainey said they are not the victim services program that the Evanston community knows.