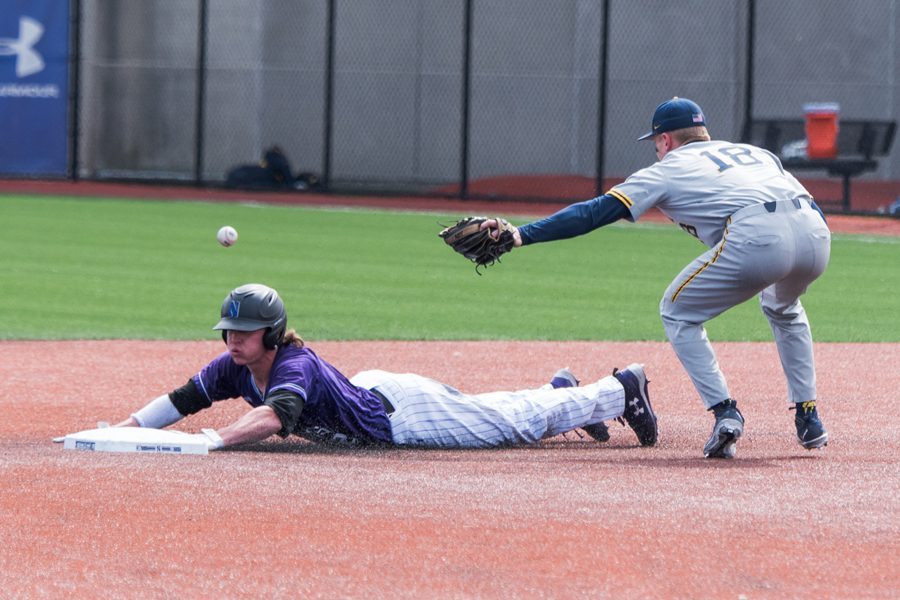 Jack Dunn slides into second base. The senior shortstop said his team received a “punch in the mouth” this weekend

Heading into this weekend’s series, coach Spencer Allen said he was impressed by his team’s ability to take at least a game off every team Northwestern has faced this season. And then the Wildcats got swept.

The Friday afternoon game presented the Cats with their best chance for a win, as sophomore southpaw Quinn Lavelle pitched five scoreless innings, and NU clung to a 1-0 lead off of an RBI single from Willie Bourbon in the first inning. Then, in the sixth and seventh innings, the Tigers capitalized on mistakes from Lavelle and junior reliever Josh Levy to plate three runs and establish a lead NU wasn’t able to overcome, falling 3-2.

The team had a modicum of success against Missouri ace TJ Sikkema on Friday, working long at-bats to elevate the starter’s pitch count and striking early with the first inning run. Allen said the team did an “okay job” not allowing Sikkema to settle in early on, and by grinding and fouling off pitches once he got in a groove.

“When you get (Sikkema) out of the game, you have to take advantage of their bullpen,” Allen said. “That’s where I thought we had some opportunities and just didn’t quite strike.”

The other two weekend games weren’t quite as close, with NU losing 16-11 on Saturday and 9-4 on Sunday as its early-season struggle to find reliable pitching continued to rear its ugly head. Over the course of the weekend, the Cats used 11 different pitchers, and only two players — sophomore Anthony Alepra and freshman Parker Hanks — gave up no earned runs while pitching more than an inning.

At the plate, sophomore Casey O’Laughlin had a career day on Saturday, smashing a home run, two doubles and a single as he finished one base shy of a cycle. During the summer and the fall, O’Laughlin worked to improve his plate discipline by taking cues from players who are successful at avoiding strikeouts, like Alex Erro and Jack Dunn.

Technically, O’Laughlin said he’s narrowed his feet and opened up his stance a little bit, which has helped him to see left-handed pitchers’ stuff better. He tries to stay as balanced as he can, which enables him to sit on his back leg and react to pitches more effectively.

“I have the same mindset, every game of just control the things that you can control,” O’Laughlin said. “(Those) are your effort and your approach, and if you keep those two things constant, good things will happen.”

With only four games to go until the start of conference play, NU certainly needs good things to start happening on the diamond.

Senior shortstop Jack Dunn, who has run the nonconference gamut three times before, said the upcoming games against MacMurray and Kent State will tell him a lot about the team’s ability to respond following this weekend’s “punch in the mouth.” If the team can perform well at the same time in the three key facets of the game — hitting, pitching and fielding — it will give them confidence and build momentum going forward, he said.

“Overall we need to be more consistent,” Dunn said. “That’s been a theme of our season so far. We just need to put all three things together, be it the pitching, defense (and) hitting on the same page for one game. We really haven’t had that in a while.”