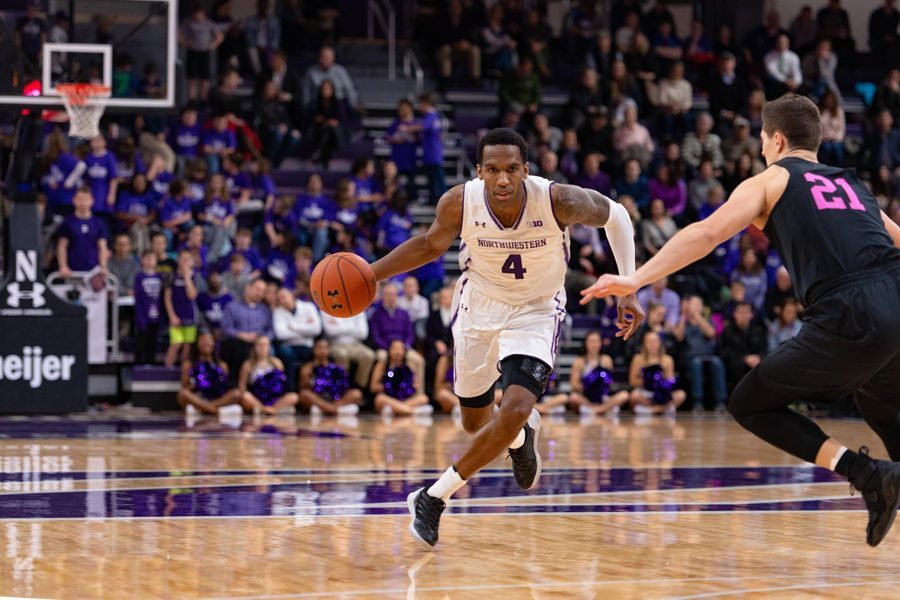 Welsh-Ryan Arena fell dead silent. There were under nine minutes to play in Northwestern’s final home game of the season, but in this moment, the only affair that mattered was senior forward Vic Law grimacing on the court.

Law banged shins with Purdue guard Carsen Edwards in the second half of Saturday’s game and immediately fell to the floor. Quite a scene ensued as the star forward started banging the court, while towels and medical personnel rushed to tend to him. In what ended up being his final Senior Day moment, Law was later carried off the court into the locker room while being showered with ovations.

“I think the thing that was most concerning was that (Law’s injury) was a pretty good cut…got him right on the spot, and it just kind of broke open,” coach Chris Collins said. “I know he’s going to do everything in his power to keep going. He’s a fighter.”

Law’s injury appeared to stifle the Wildcats as the Boilermakers went on a 7-2 run after the forward exited. Without Law’s steady ball handling and playmaking, NU (13-18, 4-16 Big Ten) turned the ball over three times during the four-minute stretch, eventually losing 70-57 to the Boilermakers (23-8, 16-4).

NU fell short of beating Purdue, who clinched a share of the Big Ten regular season title on Saturday, though Pardon said after the game that the team tried to rally itself around Law’s injury.

“Personally, I felt like (Law’s injury) ignited us a little bit,” Pardon said. “We saw all the passion that (Law) had, and as much he had put into this program, we couldn’t let that go to waste. So we kinda rallied back a little bit, but it wasn’t enough.”

Despite being ruled out for the rest of the contest, Law later returned to the bench in the second half to support his teammates The star forward’s leg underwent X-rays after the game, but those tests came back negative. Law tweeted Sunday that he has a few “scrapes and bruises but you can’t keep a Wildcat down.”

Collins said he could relate to Law’s senior-day injury because he himself suffered a similar moment in college.

“I broke my foot on my Senior Night against North Carolina in 1996,” Collins said. “I had to limp off the floor with the trainer, and it’s not a fun feeling. When you put a lot of blood, sweat and tears on the court, you want to walk off the right way. I really feel badly for him that he wasn’t able to do that today.”

Collins got emotional when asked how he will remember the senior class. He said the seniors helped accomplish milestones that others told him the Cats never would.

Collins also said Law was the first recruit to believe in his program as well, a foundational building block for NU’s success over the past four years.

“You always have to have a first guy to believe. You know, (Law) was the first one,” Collins said. “He wanted to be a trailblazer with that and others followed. We’ll always have a bond. He’ll always be special. He’s had an outstanding career.”