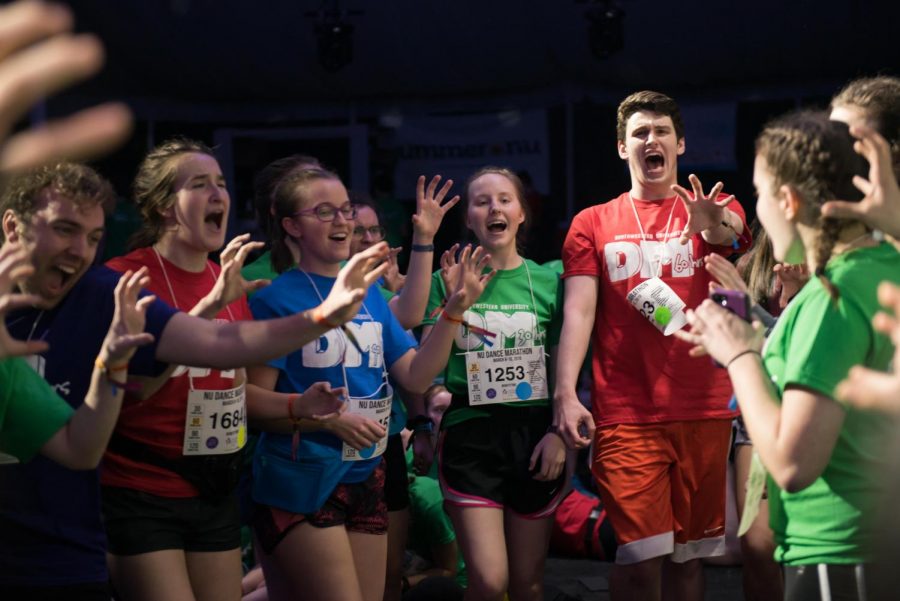 After filling up on spaghetti and salad for dinner, dancers headed back to the tent to kick off Block-182, the ninth block of this year’s Northwestern University Dance Marathon.

Hours 25 through 27 featured songs like Foundation of Wayne’s “Stacy’s Mom” and Neil Diamond’s “Sweet Caroline” as well as performances from student groups like THUNK A Cappella and Boomshaka. Northwestern University Marching Band’s Drumline performed toward the end of dinner, with fellow band members chanting their routine. All of the group fundraising totals, aside from the top three, were also announced.

About halfway through the block, University President Morton Schapiro spoke about how proud he is of dancers and shared some of his own moves with students.

“When I was in high school back in the 18th century — so there was no record — I actually won a dance contest,” Schapiro said. “It was a special category for the best dance who doesn’t move his or her feet.”

Schapiro also recognized members of the 120-hour club, students who have participated in NUDM for all four years.

Caroline Gaglio, a Weinberg senior and 120-hour club member, said she originally joined NUDM because she liked the meaning behind the organization.

“The idea of the whole University coming together for something so much bigger than them was really exciting to me,” she said. “I had a really, really great time, and seeing the final total was amazing every single time, so I thought I’d keep going.”

McCormick senior David Gilbert, a member of the Food Committee, is also part of the 120-hour club.

“It’s kind of like 120 hours of blur,” he said, adding that he first signed up just to see if he could stay awake for 30 hours.

Though Gilbert said he hurt his ankle while dancing in the tent this year, he said he’s still having a good time.

Fellow 120-club member Lydia Hyla, another Weinberg senior, said she loves the energy in the tent during the 30 hours of NUDM.

First-time dancer and Weinberg freshman Bobby Read said he liked giving back to the community through Dance Marathon and participating alongside fellow marching band members.

He added that he aspires to join the 120-hour club.

“Looking around, there’s only a few purple shirts, and that’s the color of the 120-hour people,
And so I see that as a goal and challenge to set for myself,” Read said. “I definitely want to do that in the future.”