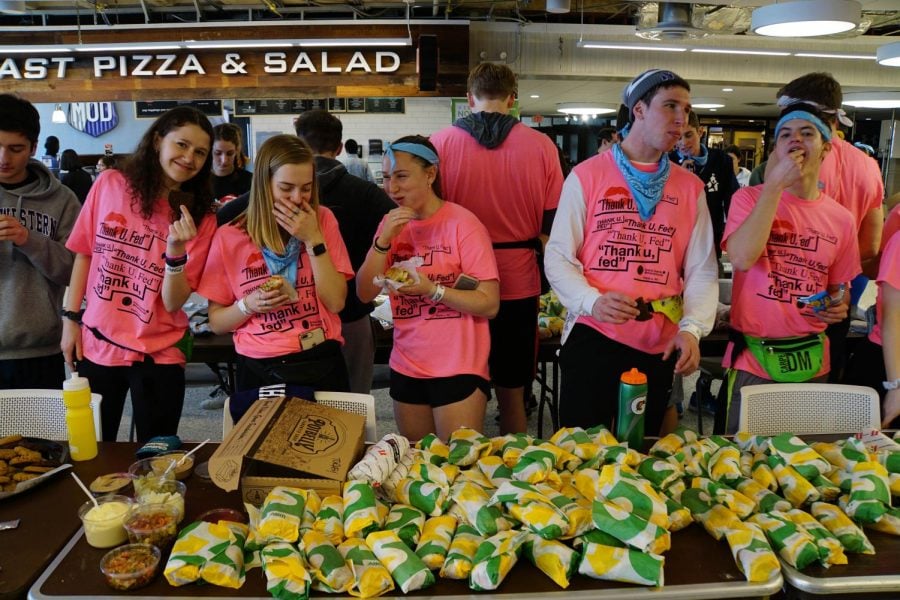 The food committee prepares to serve NU dancers. The committee serves a variety of snacks and meals during the 30 hours.

A wave of purple attire entered the tent during the Block 7 of Dance Marathon’s “Purple Reign.” Student groups such as Fusion Dance Company and X-Factors A Cappella performed while students ate lunch during a much-needed sitting break.

X-Factors opened the block by performing songs by Britney Spears and Justin Bieber, which was followed by Fusion’s preview of their spring showcase.

The block included a short lunch break, which was catered by the donations of local Evanston restaurants and vendors.

Throughout the year, the NUDM Food Committee looked for donations from the Evanston community and various alumni. The committee reached out to vendors who were previously associated with the event for donations, as well as bringing in new donors and make them a part of DM.

“We get all of our food as donations and we don’t pay for anything,” said Communication senior Cori Pitiger, a member of the food committee. “Typical donations include chips, Vitamin Water and fruit.”

The Food Committee is typically divided into food categories, and there is a subcommittee responsible for each category, the Communication senior said. The committee worked to ensure that all of the meals and snacks for the dinners are well balanced, and that everyone gets the nutrition required to carry on for the next 10 hours, Pitiger said.

During each block, the committee distributes various snacks to the dancers — ranging from Rice Krispie Treats to dried apple chips — to ensure that participants remain healthy, Pitiger said.

“The lunch that they served was Subway, Jimmy John’s and Potbelly’s, and we had Viet Nom Nom for people with dietary restrictions,” said Communication senior Eliana Galperin, another member of the food committee.

According to Galperin, this serves as a great opportunity for local businesses to showcase themselves and advertise their products to students.

Medill first-year Zoe Malin was asked to bake 200 gluten-free, vegan brownies for the participants of NUDM. On her business’ Facebook page “To Be Gluten Free,” Malin said that this was an initiative to ensure that people with gluten restrictions were adequately accommodated.

“It was definitely a huge project to take on, but I’m so grateful I did it,” Malin, a Daily staffer, said. “Making sure that students with food allergies are never isolated from social situations is so important to me and being some small part of NUDM in this way was amazing. I’m 100 percent doing it again.”

“Block 5 hit hard on everyone,” the McCormick first-year said. “This block reversed that effect and lifted everyone’s spirit.”