Wrestling: Northwestern heads into Big Ten Tournament in Minnesota on a high note 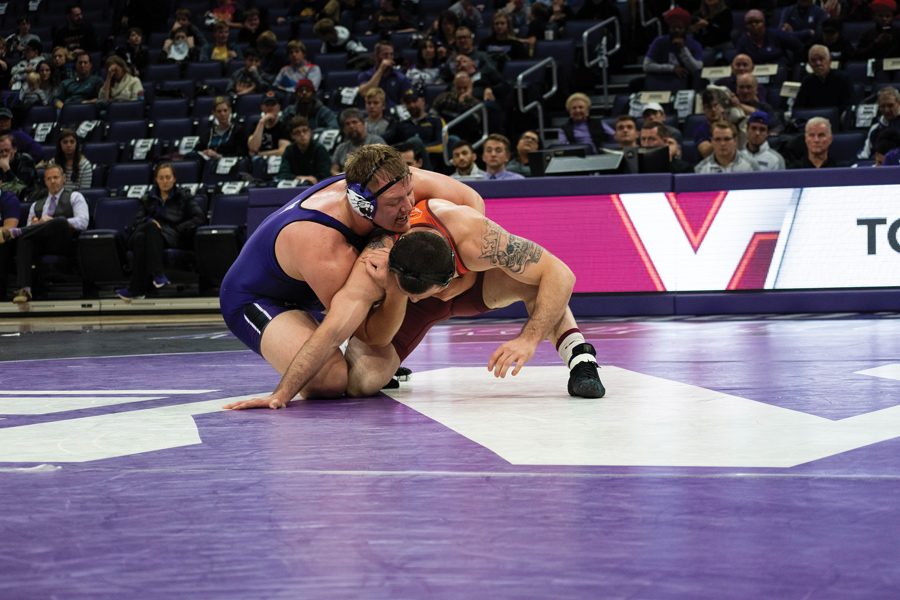 Conan Jennings spars with an opponent. The senior said he has high expectations for the Big Ten Tournament.

It’s March, when the grind of the regular season officially gives way to postseason tournaments for Northwestern.

In the two weeks since their last dual, a 36-7 rout over Southern Illinois-Edwardsville, the Wildcats (5-10, 2-7 Big Ten) have focused extensively on rest and recovery, with eyes aimed at being physically fresh and capable at the Big Ten Tournament in Minnesota. At stake for many of the wrestlers are spots in the NCAA Tournament.

“You can look at what you typically do during the normal work week and scale back the volume,” Storniolo said. “Practices get shorter, drill sets get shorter and just the amount of work the guys are doing decreases as we head towards the Big Ten Tournament.”

With 10 regular season losses, the Cats finished the regular season with their worst record since 2015-2016, when they lost 13 duals. But they ended on a high note, with two wins in a row against in-state opponents Illinois (2-9, 1-8) and SIUE (6-14, 4-3 Ohio Valley), beating the Fighting Illini for the first time in nine years.

Storniolo said the Cats need to believe in themselves to find success and a spot at nationals. NU would like to improve on last year’s 10th place team finish at the tournament, something Storniolo said would come with positive individual performances.

“(You can) control your own destiny,” Storniolo said. “Go out there hungry and go out there ready to put in the work and punch your ticket to the NCAA tournament. If everybody accomplishes their individual goals the team goals take care of themselves.”

Senior Conan Jennings is one of six wrestlers who won both matches against Illinois and SIUE. Set to graduate at the conclusion of this year, these will be Jennings’ last postseason tournaments. He finished fifth in the Big Ten Championships last season and eighth the year before.

Jennings said postseason wrestling differs from the regular season in that the team aspect is less emphasized.

“It’s always great when the team will do well, but that comes with the individual tournaments,” Jennings said. “If you beat kids you’ll get points and those points will go toward the team, so it’s about what you can do and how high you can go on the podium.”

When asked about his individual goals regarding the tournament, Jennings was a bit more coy.

“I know I’m going to nationals,” he said. “(I’ll) get high up on that podium and beat some kids.”