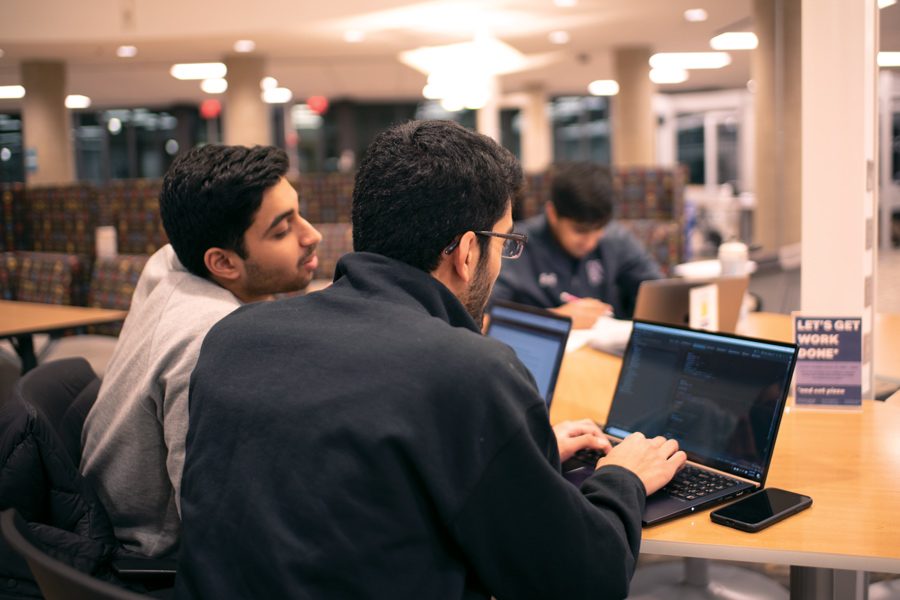 Students work at computers in the library. During the time that NUDM participants are dancing this weekend, some will be hanging out with their friends or studying for finals instead

While hundreds of students spend 30 sleepless hours in a tent for the 45th annual Northwestern University Dance Marathon, others are opting out and taking advantage of the relatively quiet weekend.

NUDM, often referred to as one of the largest student-run philanthropy in the country, has been attracting students to the back of Norris University Center for the past 45 years, and raises hundreds of thousands of dollars every year for a chosen beneficiary. Although some love the experience, it’s also known for being exhausting — dancers often stay awake for all 30 hours of the event.

While last year’s NUDM pulled in about an eighth of the University’s undergraduate population, a large number of students decide not to partake in the event and look for alternative activities instead.

Weinberg first-year Henry Alford said he signed up for Dance Marathon in the middle of Fall Quarter because he felt like “everyone was doing it.”

But Alford recently dropped out of NUDM because he hadn’t met the fundraising goals and didn’t feel emotionally prepared to dance for 30 hours, he said. If he had waited until Winter Quarter to decide whether or not to dance, he added, he wouldn’t have signed up at all.

“I was a little freshman, so afraid of missing out on stuff that I kind of felt suckered into it a little bit,” he said.

In the time he would have spent in the tent, Alford said he’ll be studying, going to Saturday’s basketball game against Purdue and enjoying his free time.

SESP senior Samantha Buresch said she’ll be taking advantage of the absence of the around 1,000 students that will be in the tent, which makes the campus calmer and empties out Evanston coffee shops.

“It’ll be pretty nice,” she said. “There’ll be no wait at Sherbucks.”

Buresch said although she respects NUDM for raising as much money as they do, she’s never participated because it’s a space in which she wouldn’t feel comfortable, regardless of what she calls NUDM’s “recent strides to be more inclusive” when it comes to the financial burden placed on dancers.

And even though the money NUDM raises each year is to benefit a charitable organization — this year’s beneficiaries are Communities in Schools of Chicago and the Evanston Community Foundation — Buresch said that some people view it more as a “rite of passage” than a charity event.

“In my freshman year in fall 2016, I asked someone who the beneficiary was,” she said. “They didn’t even know, even though they’d raised tons of money for it.”

Gerdes also encouraged students to volunteer beyond NUDM at the many charity opportunities around Evanston and Chicago.

SESP senior Hope Kaliski participated in NUDM as a sophomore but decided not to continue because she had wanted more out of her experience — this year, she’ll be spending her weekend with friends and studying for finals.

“I think they do choose really strong partners, but for me, to go through it again, I would have to have a lot more time and investment in that community partner, so that I feel like I’m getting more out of it,” she said.