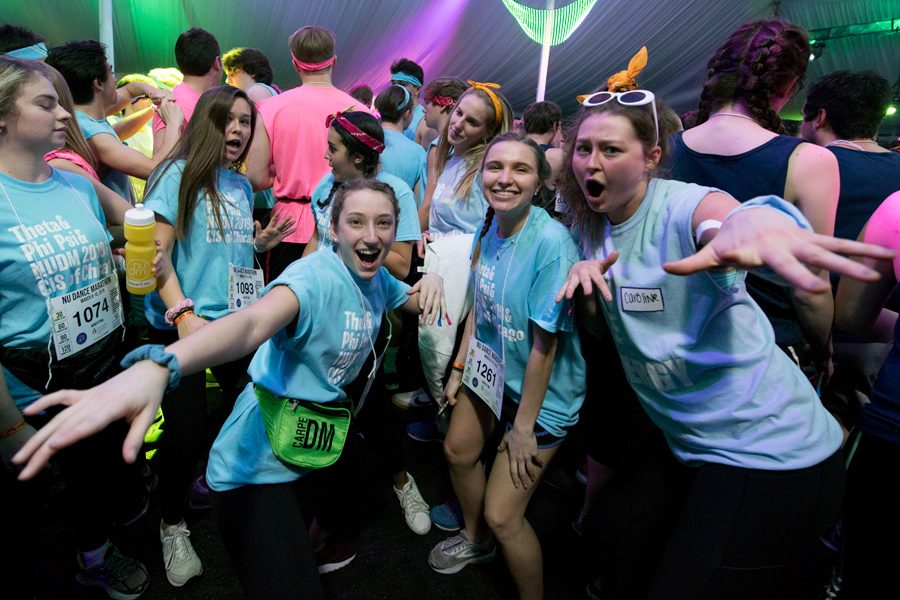 For the 45th year, hundreds of Northwestern students stormed the big white tent behind the Norris University Center ready to kick off 30 hours of dancing for its primary beneficiary, Communities In Schools Chicago.

During Block 1 of Northwestern University Dance Marathon, participants danced to remixes of early 2000s pop songs, Disney hits and throwbacks. The theme for the block, “Fanny Packs and Fruit Snacks,” featured a speech from CIS Chicago Chief Resource Officer Marianne Woodward, who told stories about the students served by the organization, which provides resources for dropout prevention.

Monique Jones, President and CEO of the Evanston Community Foundation, welcomed dancers to the tent and thanked them for their fundraising. ECF is the secondary beneficiary for this year’s NUDM.

Through the 21 years of partnership, Jones said, NUDM has contributed $1.2 million to ECF and helped fund over 30 nonprofit organizations during the last year.

“Thank you,” Jones told the dancers. “I want you to know that with everything that you do the foundation is happy to make sure we’re connecting you with who you want to connect with in Evanston.”

Weinberg sophomore Rose Genaris told The Daily this is her first time participating in NUDM because last year she was too busy during Winter Quarter of her first year at NU. This year, however, she said she felt very passionate about both ECF and CIS Chicago and decided to join.

Genaris added that her roommate convinced her to join the Productions committee, a 30-hour committee, and has been working on prepping the tent since Fall Quarter. She said she’s prepared for the 30 hours but will miss her coffee.

“My biggest worry is that I won’t have caffeine to keep me going,” Generis said. “But it’s okay because it’s a great group of people so we’ll all feed off each other and get through it together.”

Sophia Lind, a first-year in Weinberg told The Daily she decided to join NUDM because of her past work at her local Boys & Girls Club in her hometown. She told The Daily she thought NUDM would be a great way to support nonprofits in Chicago and continue her work in providing education for underprivileged kids.

With an hour into NUDM, Lind said she is feeling energized and excited to see what the night brings. However, she added this will be her first all-nighter, and she is nervous to see how her body will react to staying up all night.

Similar to Lind, Emma Healy, a School of Communication sophomore, said she is also worried about her body would react. She told The Daily that she has been sick the whole week, but she will push through.

“I have been trying to get a lot of sleep, but it didn’t really work out,” she said. “I packed up a ton of DayQuil and anything I could possibly need.”