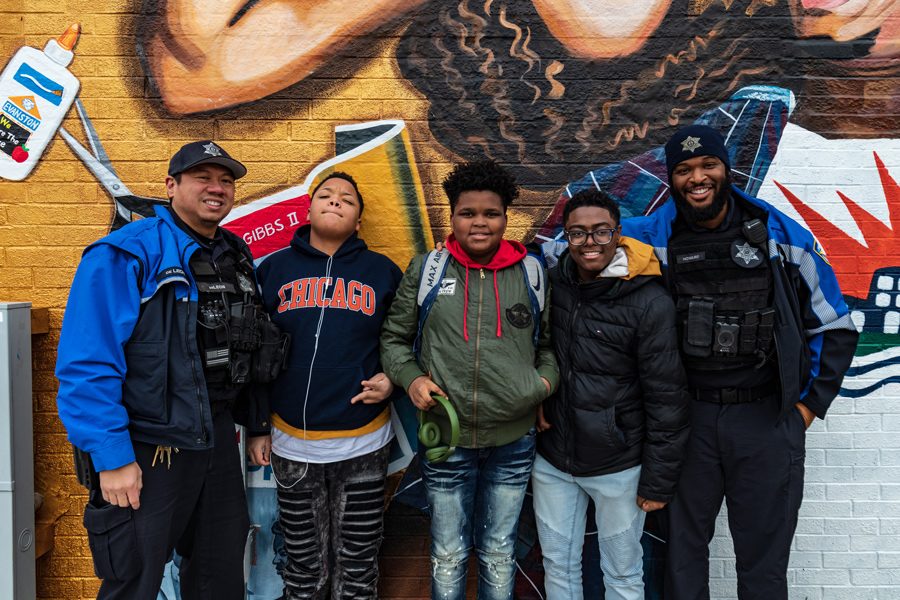 Growing up in a single-parent household in Chicago’s south suburbs, Evanston Police Department Officer Adam Howard lacked a positive male figure. To him, being a role model for Evanston’s youth is deeply personal.

“I’ve learned so much about myself in working with the young men,” Howard said. “These young men, they depend on us for social and emotional support. And for some, we’re father figures.”

When Howard co-founded the Officer and Gentlemen Academy with Nichols Middle School Principal Adrian Harries, Howard wanted to “break the barriers” between police officers and the black community in Evanston, starting with young black men. Now in its third year, OGA works with middle and high school students to minimize disparities in education and empower young men.

“One of the things that I witnessed in our community is a lack of direction, particularly for young black men,” Howard said. “Throughout my career I have observed a number of young men just lose their lives to the streets, get involved with the wrong crowd, start hanging with people that just have a negative impact on (their) decision-making.”

A need for male mentorship

While the program is open to students of all races, Howard said he wanted to initially focus on young black men who were disproportionately struggling academically compared to their white counterparts.

Howard said the current climate and “historical barriers” between the police and black communities have given these kids a negative perception of law enforcement. OGA, he said, allows young people to develop their own perception of police officers based on personal experiences.

Howard, who has been an officer for 11 years and was one of last year’s Officers of the Year, said OGA leads lessons on topics like conflict resolution and accountability.

“(We’re) preparing them for life, to be adults, to take ownership, and we want them to be responsible and disciplined,” Howard said. “We understand that doesn’t happen overnight, but there should be some progression.”

Expanding the Officer and Gentlemen Academy

The group now meets about once a week after school at the Evanston Township High School Transition House on Lemar Avenue. The lessons range from how to tie a necktie to financial literacy.

In its first year, OGA was only open to students at Nichols Middle School. It then expanded the program to include all District 65 middle schools, and the first class of OGA students are now freshmen at ETHS.

Tre Wright was in that first class.

Wright, 14, started the program when he was in seventh grade at Nichols and is currently running to be president of his OGA class. Howard said Wright gave “an amazing speech” as a candidate.

“I talked about all of the skills I would bring to the table as president,” Wright said. “I brought gift bags for everyone and cupcakes to let them know I was serious about running. I spent a day on my speech, so I felt like I had a chance — I knew that I put my everything into it.”

In his speech, Wright talked about his communication skills and the respect and responsibility he’s learned from OGA.

“I feel like my brothers can come to me when they need something,” he said. “I feel like I’ve matured as a leader.”

Officer Ervin de Leon, Howard’s partner at the EPD, said OGA organizers are constantly reevaluating the program to ensure it benefits and engages all students.

He said it’s his responsibility to give the students the confidence to be leaders in the community.

“We want every one of these men have a voice, and even if they’re uncomfortable voicing their opinion, it’s important for them to understand that being shy, there’s nothing wrong with that,” de Leon said. “But you still need to be heard.”

He said OGA facilitators have started to have the students break off into small groups in order to facilitate better discussions.

As the students become more comfortable at OGA, he said, the conversations have become more productive.

“We want them to have the confidence and the courage to step out and pursue their hopes and aspirations and then come back, spread the same sort of mentor philosophy, that participation within the community,” de Leon said. “That’s really how it’s going grow.”

Wright said he thinks the expansion to include more than just students from Nichols has been an improvement to the program.

“Now more kids can have the opportunities that we have,” he said.

Howard said the officers who work with students in the program have had an “incredible impact” on the community.

“We’ve seen it when we have young men who call the police not for help, but … to share good news, to invite us to their birthday parties to their Bar Mitzvahs,” he said. “I’m honored to watch these young men graduate middle school, and in a few years they’ll be graduating high school, and then before you know it they’ll be in college.”

Howard and de Leon said strong relationships between the police and communities begin with mutual respect and effective communication. Howard said this type of collaboration can be challenging, particularly for individuals who have already had negative interactions with police officers.

However, he said, police need to be transparent in order to make change. He commended the EPD’s efforts to increase community policing by engaging with residents.

Howard emphasized that the program would not be able to exist without the community members who support it. Mayor Steve Hagerty, Evanston aldermen and local business owners have all expressed support for the program. OGA has “fairy godmothers” who are women in the community who want to help with the program by fundraising, providing emotional support and organizing events.