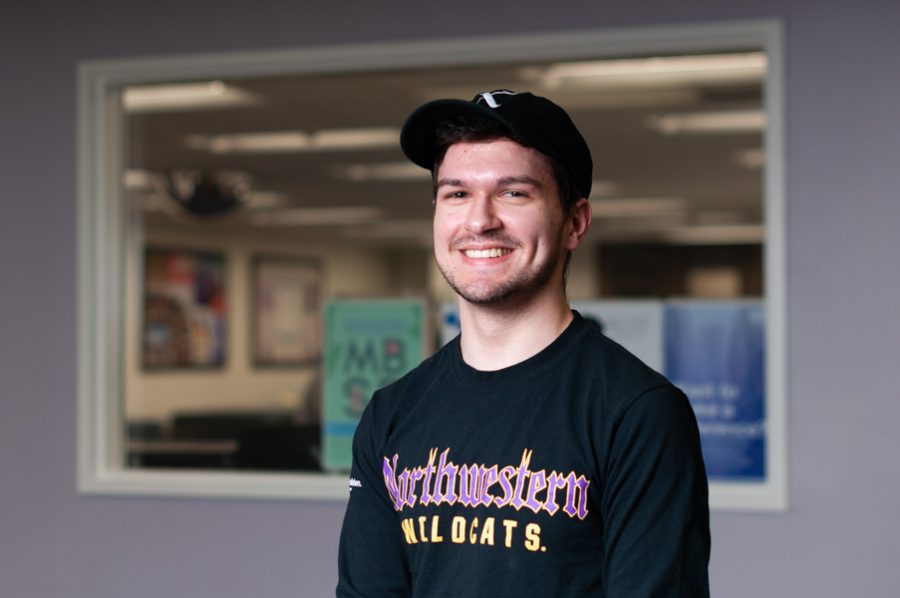 Communication first-year Brett Mayfield. Mayfield wrote a viral Twitter thread on the difficulties of being a low-income student on campus

Communication first-year Brett Mayfield grew up in Welch, Oklahoma, a small town of about 600 people, where it was normal to have few clothes. At Northwestern, Mayfield soon realized that his new friends found it strange that he wore the same few outfits. When one of his professors commented on him wearing the same thing everyday, his classmates chimed in.

“It was kind of embarrassing,” Mayfield said. “I guess people thought I was messy or something. Like I didn’t take care of myself, but it’s just because I can’t afford a ton of clothes.”

The social culture of NU is challenging to keep up with for low-income students like Mayfield. At least 66 percent of Northwestern students had come from families from the top 20 percent of the income distribution, according to the most recent data collected in 2017 by the Equality of Opportunity Project, which can create an environment filled with a set of norms and social practices that are unfamiliar to low-income students.

Mayfield said he struggles to afford going out to socialize with his friends. Often, he said that he gets to know new people but they begin to push away when he can’t afford to go out.

“I do feel like a burden sometimes,” Mayfield said, “Like I’m just being the bummer of the group.”

“by low-income, i mean that my family hit the poverty bracket this year; our crop failed for the 4th year in a row on our farm,” the post read, accompanied with a picture of Mayfield in a purple NU sweater and black jeans. “this is what i wear every day, not only because i love NU, but because it’s pretty much all i have.”

The thread, which currently has 1,730 likes and 345 retweets as of Thursday night, pushed Twitter users to offer an outpour of support, from money to clothes and school and home supplies.

“I didn’t really want that to happen,” Mayfield said. “I mean, it’s a nice offer. I don’t want to seem like a charity. The point of the post was not really ‘Someone help me out and buy me clothes.’ My hope was not only that people would start treating me differently for wearing the same thing, or not being able to afford to go out, but also that we would be more aware of that in general.”

A space for support

Mayfield’s experience is one example of the many struggles low-income students encounter at NU. Although members of the Quest+ community, which includes not only QuestBridge scholars but all first-generation/low-income students as well, are trying to address these problems, the group represents many identities and experiences, making it a challenge to address everyone’s needs, said Madisen Hursey, a co-president of Quest+.

“There is no one feeling that low-income students face,” the Weinberg senior said. “It’s one of the most diverse identity groups I’ve encountered because there’s so little that connects them, and also so much.”

Quest+ worked with Associated Student Government to publish an open letter asking the University for a first-generation and low-income student space on campus. The letter asked for “a dedicated community space that would enhance current social, financial and emotional support provided by Student Enrichment Services as well as enable FGLI students to gather, study and build relationships in a safe and supportive environment.”

Quest+ co-president Christian Reyes said he feels his high-income peers were raised with the expectation that they would attend an elite college like NU. The SESP senior said this often makes him feel out of place.

“A lot of low-income students come to this school hoping to break out into a different class,” Reyes said. “Every day I have to deal with knowing (NU) is helping me be here, I feel like I should be grateful because I’m here and if I’m not exceeding in every possible way then I’m failing.”

Increasing its lower-income student population has been a priority for the University. In 2016, University President Morton Schapiro announced an initiative to admit incoming classes of at least 20 percent Pell-Grant eligible students by the fall of 2020. This statement was fulfilled early in 2018.

Student Enrichment Services is one of the major resources on campus for low-income students, providing low-income students with laptops, winter gear, bed sheets and towels. Additionally, donors have provided funds for students to participate in extracurricular activities that may require dues, such as a club sport or fraternity and sorority life. SES also provides funding for students that request therapy outside NU.

“At the end of the day, what lower-income first gen students need is for the entire campus to really think of all their students for their developing programs, initiatives, requirements, and really centering the experience of all our marginalized groups,” she said.

However, Reyes said he still thinks the University has yet to deliver a socially and culturally-accepting environment for low-income students.

“If they’re promising a campus that is welcoming to Pell-eligible students, they should deliver,” Reyes said. “There’s a difference between having a diverse campus and having an inclusive one.”

Adjusting to an environment that is flanked by wealth can make it difficult for low-income students to feel accepted. Though transitioning to a college with such different norms has been challenging for Mayfield, he feels like he made the right choice in coming to NU. He grew up thinking he would attend community college, but, as if fate stepped in, a QuestBridge pamphlet fell out while Mayfield was taking out the trash in high school. He brought it to his high school counselor, who encouraged him to apply.

Now that at least 20 percent of the students in the class of 2022 are Pell Grant-eligible, Mayfield hopes his peers will be more aware of the harm an offhand remark can cause a low-income student.

“I feel like we could stop assuming only rich people get into Northwestern,” Mayfield said. “We all got in here because of our drive, our intellect and our ability to keep going and pursuing a better community. So I don’t think money in my wallet has anything to do with any of those things.”