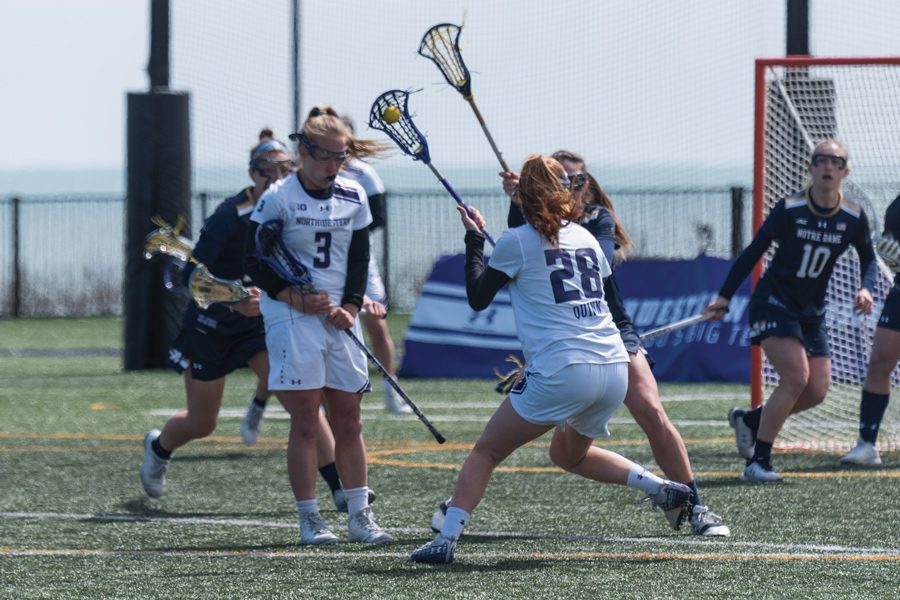 Claire Quinn makes a pass. The Wildcats play No. 1 Boston College this weekend

It’s starting to look like just another season for No. 9 Northwestern.

The Wildcats (4-2) have put up impressive performances versus middling teams such as Canisius and Louisville but failed, for the third straight time, to topple powerhouse North Carolina last week.

Saturday night offers NU another chance to flip the narrative of its season. The Cats’ next opponent, No. 1 Boston College, looks like the second lacrosse powerhouse gearing up to stomp NU. However, the Eagles’ undefeated season (7-0) will have to go through Ryan Fieldhouse, where the Cats have yet to lose this year.

Draw controls will be the center of attention this weekend. Boston College has won the second-most total draw controls in the country this season, while NU touts sophomore midfielder Brennan Dwyer, who is the Big Ten’s top draw control specialist. Dwyer said preparation and quickness have been the x-factors for her this season.

“I think (the difference is) just being quick,” Dwyer said. “We practice it every day. Practice makes perfect. A bunch of reps and against different people.”

The Cats are hoping for another strong performance from freshman midfielder Izzy Scane. Scane has scored two goals in each of her past three games and racked up 20 draw controls on the season. The midfielder most notably scored the first goal of the season for NU within 20 seconds.

Though she is new to the team, Scane said her gritty play has earned her respect on the field.

“I think a big thing with coming as a freshman, like transitioning from high school, is just to be confident in your ability,” Scane said. “I know a lot of the girls that are here have been used to the level of like college play, but if you come in and play as hard as you can, everyone should know that you can kind of hold with them.”

The Eagles are currently where Amonte Hiller once had the NU lacrosse program. Boston College has been the runner-up in the past two national championships and were within a goal of winning last year. Amonte Hiller won multiple NCAA championships a decade ago coaching the Cats.

“(Amonte Hiller) just gives this love for the game to us every single day, and we want to play for her. I think everyone just wants to do well and be successful, when you play for such a successful coach,” said Harker. “I think that love of the game and that competitive edge just stemmed through our whole history.”