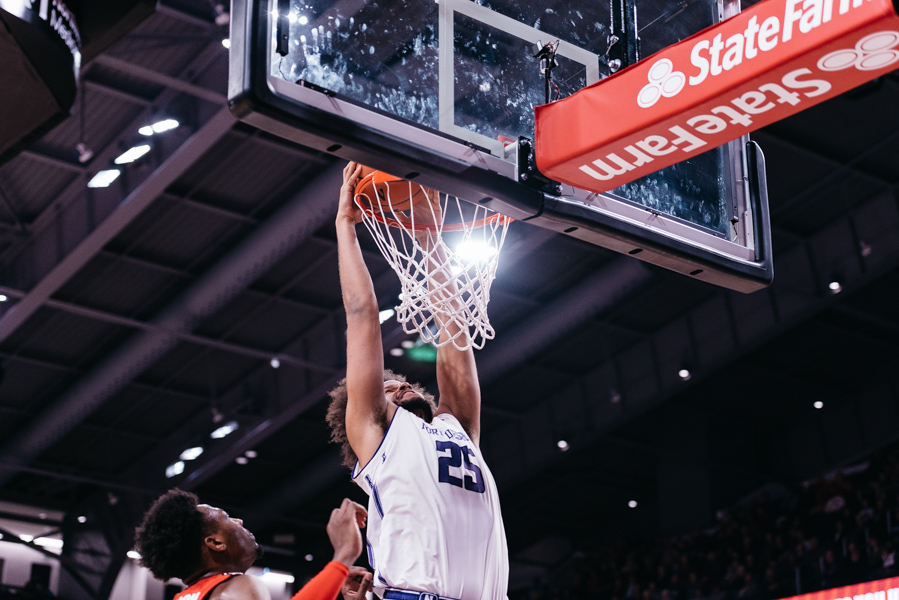 Barret Benson slams home a dunk. Benson had four points in the first half.

When your opponent shoots 14 percent in the first half, it normally means you are doing something right. Whatever that something was, it helped Northwestern break the 10-game losing streak that has put them at the bottom of the Big Ten.

In a must-win game for the Buckeyes, NU played spoiler as Ohio State struggled to produce in the first half because of the Wildcats’ suffocating defense. The Buckeyes couldn’t throw a rock into the ocean, shooting 1-for-12 from behind the arc and 4-for-28 overall. The Cats weren’t great offensively either, but solid contributions from sophomore guard Anthony Gaines and senior forward Vic law were enough to give NU an 11-point lead headed into the half.

But Ohio State didn’t go away quietly. Ohio State guard Duane Washington Jr. nailed a three-pointer to cut the Cats’ lead to 47-42. However, NU was just too much, going on a 10-0 run to grab a 15-point lead. The Cats created an insurmountable lead, eventually winning the game.

Ohio State was atrocious on the offensive side of the ball and scored 17 points on shooting 4-for-28 from the field in the first half. The Cats’ gameplan deserves all of the credit, as their suffocating defense led to more turnovers — seven —than first half field goals — four —and Law made as many first half field goals as Ohio State did. Heading into the game, the fewest amount of points NU gave up in the first half was 22 points against Rutgers on Feb. 13. The Cats have prided themselves on defense all season, but Wednesday’s first half performance was by far their finest.

2. The Wildcats’ bench provides much-needed support. On Wednesday, NU’s bench proved crucial to extending and keeping the Cats’ lead throughout the game. Specifically, junior guard A.J. Turner had one of his best games of the season coming off the bench. Turner came into the game averaging 8.1 points per game and had scored in double figures in three of the last six games. He put up another quality game, scoring 10 points on 4-8 shooting and making two shots from behind the arc.

Aside from Turner, junior center Barret Benson was also very productive. Despite scoring just four points, Benson provided a great boost of energy off the bench. Ryan Greer also played one of his best games of the season, attacking the basket and scoring five points. With seniors Law and Pardon, along with graduate guard Ryan Taylor leaving after the season, Wednesday’s game was a good look at the future of NU basketball.

3. NU plays spoiler in a meaningless game. With just one game remaining in the season, the Cats are locked into the 14-seed in the Big Ten Tournament. However, with the expanded Big Ten schedule, it gave Big Ten teams the opportunity to get more quality conference wins before the tournament. Unfortunately for the Buckeyes, this plan backfired on them.

NU was able to get just their fourth win in the conference, but also gave Ohio State what is considered a “bad loss.” While the Cats have been out of the postseason picture for a long time, the Buckeyes might have trouble getting into the big dance with a loss to NU on the resume. It remains to be seen how the Big Ten Tournament turns out, but the Cats might be the reason why their conference sends one less team to March Madness.