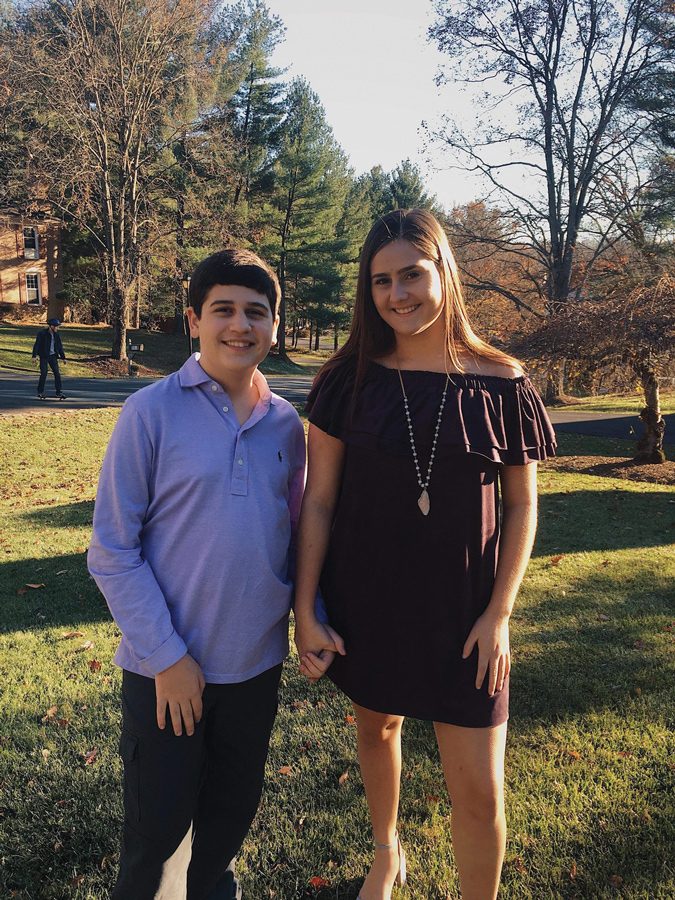 Medill freshman Lia Assimakopoulos and her younger brother William, who was diagnosed with autism when he was two years old. Her first book, “Life in Letters,” details the experiences of her brother and other non-speaking autistic children.

Lia Assimakopoulos wants to give a voice to the silent. As the older sister of a non-speaking autistic teen, the Medill freshman wrote her first book about her brother and other children who struggle with verbal communication, and the discovery of a new form of dialogue that has helped them. The Daily sat down with Assimakopoulos to discuss her inspiration and writing process.

The Daily: What was the inspiration behind “Life in Letters”?

Assimakopoulos: I decided to write about autism because I have a younger brother named William — he’s three years younger than me — and he was diagnosed with autism when he was two years old. It’s definitely not the thing we had planned for, but it’s really changed me as a person. The autism community has done a lot to benefit my brother, and I thought that writing a book could really help give back and educate people who don’t know as much about autism.

The Daily: What was the process of writing your book?

Assimakopoulos: I kind of took a unique spin on this book. My brother has gone through tons of different therapies, trying to learn how to communicate because he’s technically non-speaking. We eventually found this new, innovative form of communication where he’ll spell words out on a letter board, which is essentially a laminated alphabet board. I decided to seek out stories of other kids who use this same method of communication, and I interviewed about 20 people who each talked about different aspects of autism and how it was important to their life.

The Daily: How were you able to balance school and writing a book?

Assimakopoulos: At my high school, during the month of May, every senior gets to take the month off to do a senior project. I decided to do this book as my project, and I did the bulk of my interviewing and my writing during that month. Over the past summer, I finished it, did a little bit of editing and then it all came together over this past month.

The Daily: What is the main message that you want to convey to readers who might not know much about autism?

Assimakopoulos: The biggest thing I’m trying to convey is just because these people may be different doesn’t mean that they’re any less intelligent or any less capable on the inside. Autism is often mistaken to be a cognitive disability, but in reality, it’s a motor disability. Body control is the hardest thing. Speech is a motor function. People often really struggle to get the words out, but that doesn’t mean they don’t have the words within. The whole point of this book is to show that there are so many incredible young people with autism. They have so many powerful stories that deserve to be heard, but they aren’t given the opportunity to share them because we, as neurotypical people, often don’t give them that opportunity.

The Daily: Now that you’ve published your first book, what do you see in your future for writing?

Assimakopoulos: I’m a journalism major, so I love to write. I plan on doing a lot of stuff like this. I really want to help my brother write a book one day, if that’s something he would ever want to do. I know there are a lot of kids in the autism community — a lot of non-speaking kids — who use this method of communication and have written books about their own experiences. My brother is an incredible writer —it’s one of his biggest talents. I think if he were to write a book, it would be so much better than mine. One of my next projects is to help him get to that point.