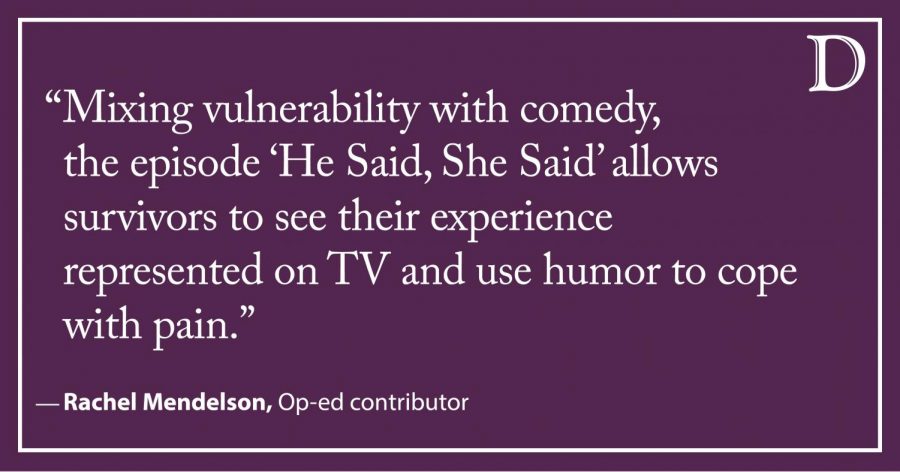 This article discusses sexual assault and contains spoilers for the Feb. 28, 2019 “Brooklyn Nine-Nine” episode “He Said, She Said.”

The NBC show “Brooklyn Nine-Nine” is no stranger to addressing social issues: It has already tackled racial profiling, LGBTQ experiences and police corruption. With the shifting cultural emphasis on sexual assault and the #MeToo movement, it only seemed time for the show to delve into the complexity of sexual assault cases. “He Said, She Said” is the first sexual assault case in all six seasons of the show. But as it balances the serious topic with humor, “Brooklyn Nine-Nine’s” #MeToo episode does more than just appropriately address sexual assault; it teaches viewers about how society normalizes and dismisses sexual violence against women, representing the power of media and entertainment to educate and spark difficult conversations on sensitive issues.

“He Said, She Said” opens with a new case where an investment banker, Seth (Jonathan Chase), has been admitted to the ER with a broken penis. After main characters make comical guesses about how the incident occurred, Capt. Raymond Holt (Andre Braugher) informs the team that Seth was struck by a female coworker, Keri (Briga Heelan), who claims he sexually assaulted her.

The show’s star couple, detectives Jake (Andy Samberg) and Amy (Melissa Fumero), are assigned to the case. They immediately believe Keri (which isn’t typical for sexual assault cases, but works for the sake of a 22-minute episode) and suggest that she turns down the $2.5 million non-disclosure agreement that the firm offered her and file charges for sexual assault instead.

However, Rosa (Stephanie Beatriz) challenges Amy’s plan to press charges and explains that pressing charges introduces even more problems, like that Kira will be forced to go through a public trial, where her credibility will be questioned. As Rosa powerfully asserts, “Even if she wins, she still loses,” the conversation addresses the larger issue of institutionalized sexism and whether coming forward in the hopes of protecting other women is worth the trouble of fighting against a system that predominantly benefits men. This powerful moment highlights the difficult decision many women must face when confronting those that harmed them.

While the majority of the episode balances the serious topic with its typical “Brooklyn Nine-Nine” humor, the most powerful scene in “He Said, She Said” is when Amy tearfully shares her own experience of sexual harassment to Jake. She reveals that the reason she transferred to the precinct was because her previous captain tried to kiss her when he took her out for an ostensibly professional, celebratory dinner after she made detective. When Jake realizes that the challenges women face are worse than he previously imagined, Amy replies, “This kind of stuff has happened to literally every woman I know. I just wanted to help make it better for this one woman.”

In this raw and emotional scene, Amy reveals the detrimental impact that sexual assault and harassment has on all women, not just herself or Keri. In what I believe may be the most powerful line in all five-and-a-half seasons of the show, Amy exposes the historically patriarchal society that has silenced women for far too long. And in that silence, there are hundreds of women with stories just like Keri and Amy’s – women who are forced to carry the guilt and blame for their assault while their perpetrator continues on unharmed. Amy’s vulnerability seeks to end this silence, showing viewers that sexual assault and harassment can be seen in many different ways, and that each of those creates an equally difficult and long-term emotional impact.

“Brooklyn Nine-Nine” doesn’t try to apply a happy moral ending about sexual assault; instead, it sends a positive message about the importance of supporting survivors and how doing so can potentially inspire others to feel less alone and come forward about their own experiences.

Media and entertainment have the role of setting precedents for reality; by tackling difficult social issues, they set the frame and conversation for society as a whole. Mixing vulnerability with comedy, “He Said, She Said” allows survivors to see their experience represented on TV and use humor to cope with pain. While the episode certainly isn’t perfect, “He Said, She Said” is an excellent example of using entertainment as a means of educating viewers and sparking the difficult conversations necessary to challenge the prevailing societal norms that perpetuate sexual violence against women.

Rachel Mendelson is a sophomore. She can be contacted at [email protected] If you would like to respond publicly to this op-ed, send a Letter to the Editor to [email protected] The views expressed in this piece do not necessarily reflect the views of all staff members of The Daily Northwestern.