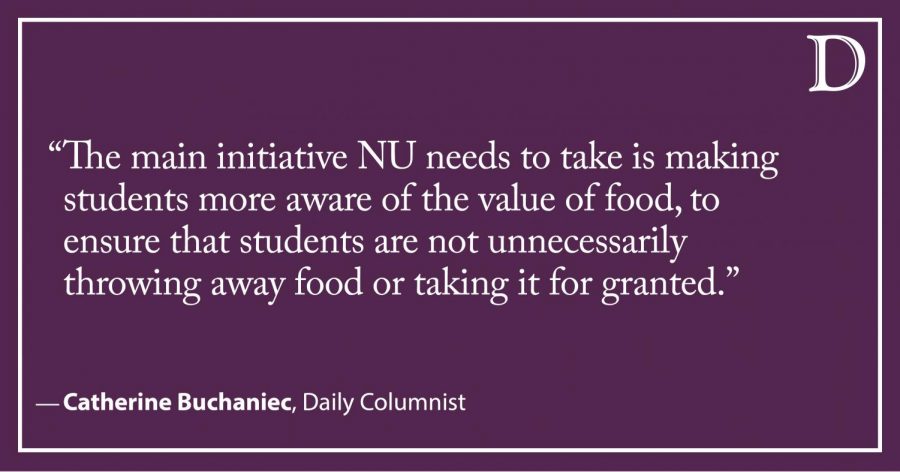 This is the third in a series about sustainability at Northwestern University in light of the 2018 UN Intergovernmental Climate Report. In the report, scientists concluded that in order to prevent 1.5 degrees C of warming, greenhouse gas pollution must be eliminated by 2050 in order to mitigate the major effects of climate change.

In January, I wrote a column explaining that corporations rather than individuals hold the bulk of the responsibility for greenhouse gas emissions since 1988 — that problem isn’t primarily you as an individual. Nonetheless, there are steps you can take to reduce your personal greenhouse gas footprint — the most important is the reduction of your consumption of meat.

Essentially, we need to change how we eat and how we produce food.

Animal farming is responsible for 14.5 percent of the world’s greenhouse gas emissions. In order to lessen this impact, humans need to consume 30 percent less animal products as soon as possible, according to the 2018 UN Intergovernmental Panel on Climate Report.

However, this recommendation — supported by one of the most comprehensive analysis of the state of environment to date — has received little attention from both governmental actors and environmental activists. The conversation regarding greenhouse gas emissions is typically shaped more by transportation rather than agriculture — an agenda choice I believes lies with feared consumer backlash.

This hesitancy is not unwarranted. Food holds a special place in every culture; cuisine is an extension of one’s values and is ingrained in both tradition and family. Any attempts to regulate that cuisine might be taken as an affront to one’s culture.

Yet this change, especially in regards to meats like beef and lamb, is necessary if greenhouse gas emissions are to be reduced.

Animals like cows and sheep use a bacteria in their stomachs to aid in the digestion of food like grasses. This process also produces large amount of methane, which is then released into the atmosphere. Cattle specifically, both those raised for beef and milk production, are responsible for most of the emissions.

If things don’t change and our diets don’t adapt to the perilous state the world is quickly moving toward, the situation will only continue to worsen due to the growing world population. More people mean greater environmental pressures on an already-stressed food system.

I am neither a vegan nor a vegetarian, and I am certainly not saying that everyone should adopt one of those lifestyles; however, I do believe we need to be more conscious of the food that we eat and the effort that goes into harvesting and producing that food.

For decades, beef has been viewed as a staple of the traditional American diet, more so than in other cuisines. It’s time to move toward other forms of protein, some of which are actually healthier than beef.

Foods like beans and lentils contain vast amounts of protein and can serve as meat-alternatives. Moreover, they are more eco-friendly than beef because they do not emit the same levels of methane as beef production.

In the NU dining halls, not only is beef a regular ingredient featured in rotating meals, but hamburger patties are available on a daily basis.

At NU, we should start to decrease beef’s presence in the meals we serve. We don’t need to eliminate it entirely, but we should be more conscious of the frequency with which we use it. We could choose one day a week when we don’t serve meat at all or serve hamburgers three days a week instead of every day.

But most of all, the main initiative NU needs to take is making students more aware of the value of food, to ensure that students are not unnecessarily throwing away food or taking it for granted.

Although beef accounts for large amounts of agricultural emissions, it is not the only source. The production of most of our main food staples have some greenhouse gas impact, whether it be through the transportation of candy bars to the Norris C-store or the use of fertilizers to produce the vegetables in Allison Dining Hall’s salad bar.

Altering our lifestyles is not going to be a quick switch, and it can be understandable as to why politicians have avoided making the recommendation to eat less meat. But regardless of backlash, this is change that needs to be made.