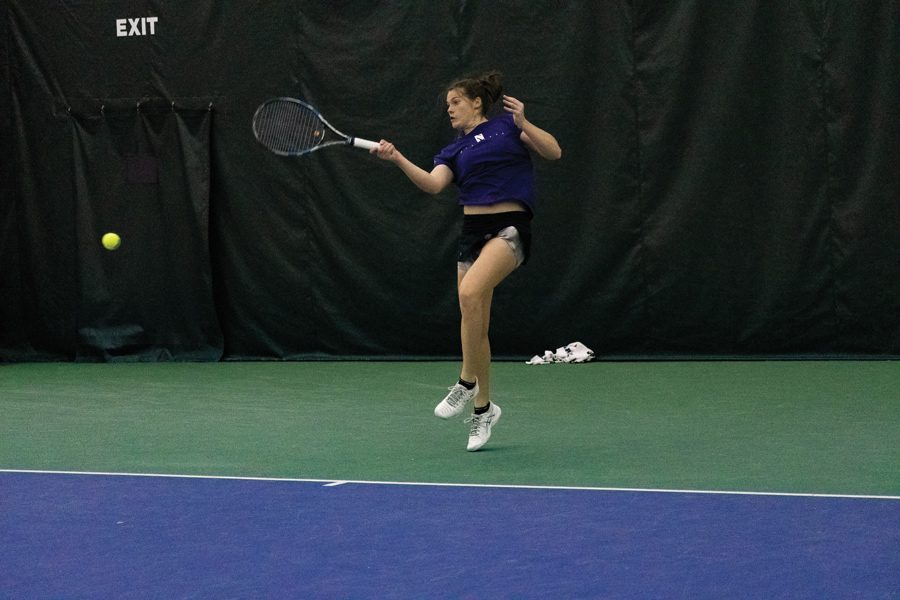 Julie Byrne strikes a forehand. She won both of her matches against Illinois this weekend

Despite this being called a rivalry, the Wildcats (7-5, 1-0 Big Ten) earned their 19th straight win over the Fighting Illini (5-6, 0-1) and their first Big Ten win of the season.

Two of NU’s three doubles teams won to give the Cats an early 1-0 lead. From there, Byrne and Pozo, as well as senior Rheeya Doshi and graduate student Carol Finke won their respective matches to put NU up a significant margin.

Byrne’s 6-0, 6-1 victory over Illinois’ Jaclyn Switkes was particularly impressive. NU’s number two player followed up her strong doubles win with freshman Hannah McColgan to cap off a banner day. But she said it didn’t always look that way.

“I was a bit under the weather this morning,” Byrne said. “So my focus was kind of just to get through the day. And then I think doubles really helped. It was a huge crowd. Hannah played really well. And then going into singles I just kind of used that energy a lot and got off to a real good start.”

Spectators showed up in droves to watch the Cats play at the Combe Tennis Center, a fixture when NU plays Illinois. Fans drove from Urbana-Champaign to watch, but their cheers were drowned out by the NU support, especially the chants from members of the NU Spirit Squad.

Byrne said those cheers pushed NU to victory in some of the tough three set matchups.

“The crowd helps so much,” Byrne said. “It was so nice to see so many people out their cheering.”

Byrne said at the beginning of the season, NU struggled with consistency, forcing some players to make up for the mistakes of others and putting more pressure on each player to win her respective matches. Now, with the Cats at their best, coach Claire Pollard said she doesn’t see any holes in her team.

“I think the ultimate compliment you have have on your scouting report is ‘she is a tough out, she is a miserable out,’” Pollard said. “I think if you can get that written about you, there’s no greater compliment that you can have.”

As NU embarks upon the rest of the Big Ten season, all seems to be falling into place for the Cats to repeat as Big Ten champions. Pollard said they’ve been working on staying mentally sharp, continuing to respect each opponent.