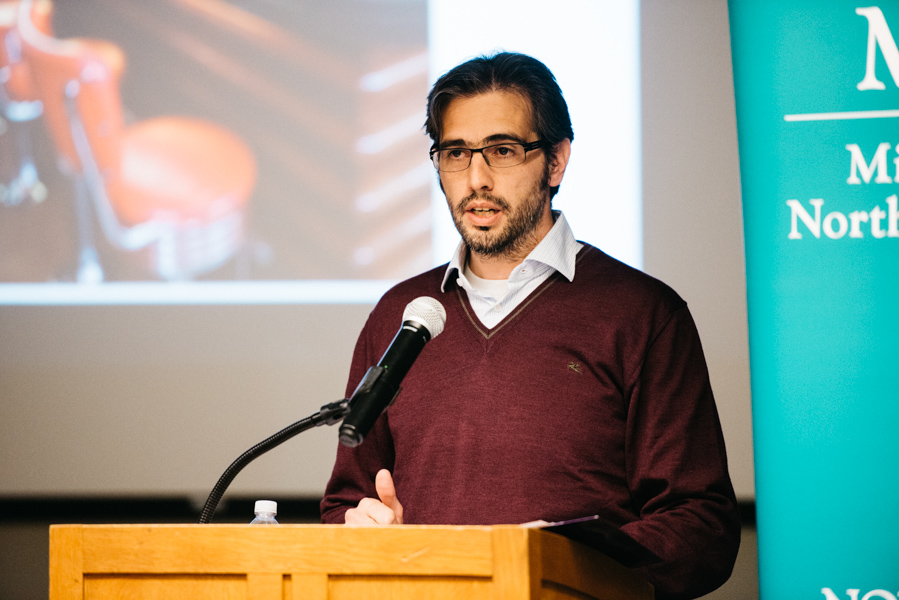 Northwestern University in Qatar Prof. Sami Hermez speaks at the Evanston Public Library. Hermez discussed political violence in Lebanon and his book “War is Coming: Between Past and Future Violence in Lebanon"

Northwestern University in Qatar Prof. Sami Hermez described a “conscious performance of denial” of responsibility for political violence in Lebanon at a Monday event.

Hermez, an anthropology professor in residence at the NU-Q Liberal Arts Program, spoke at Evanston Public Library to discuss his 2017 book, “War is Coming: Between Past and Future Violence in Lebanon.” The event, organized by NU’s Middle East and North African studies program and EPL, is part of a several-years long collaboration, said Lorena Neal, an EPL librarian. Hermez is the third speaker this quarter after a hiatus in the fall, Neal said.

Hermez said he examines day-to-day life in relation to political violence in Lebanon. As a Lebanese-American citizen, Hermez said the book is a personal realization of the effects of the 1975-1990 Lebanese Civil War on the lives of his loved ones, which he “caught glimpses of” while visiting Lebanon during his childhood.

“I hope what emerges from this is a better understanding of the ways of being and doing in conflict zones,” Hermez said.

In his research for the book, Hermez said he sought to examine how people negotiate political insecurity, but did not intend to offer specific solutions to Lebanon’s issues. Instead, he studied what he perceived as a culture of anticipation, describing the sentiment of Lebanese citizens as living “in the meanwhile” between the 15-year civil war and an expected future conflict. The title of the book is taken verbatim from a sentiment expressed to Hermez by several Lebanese citizens, he said.

“People in Lebanon were not living in a time after war, where they had become more peaceful so long as they remembered it was past,” Hermez said. “Instead, they were constantly reminded that they were living in a time in between. War around the corner in a future time and war past made the present unstable, precarious, and contested.”

Hermez conducted fieldwork for his book between 2005 and 2009, including a 24-month stretch in Lebanon beginning in 2006. During that time, he said, Lebanon experienced the 2005 assassination of a former prime minister, a 2006 war with Israel, a 2007 conflict involving a Palestinian refugee camp and several violent conflicts in 2008.

The book is divided into two parts, Hermez said, with the first examining the culture of anticipation and the second studying memory and citizens’ recollections of the Civil War. Here, Hermez criticized a practice he called “no victors, no vanquished,” a peacekeeping strategy originating from Lebanon’s prime minister during its 1958 Civil War.

Hermez characterized the slogan as a “Hobbesian project of keeping violence at bay” as opposed to actual societal improvement. He later argued that “no victors, no vanquished” placed “no emphasis on truth-telling or responsibility” by refusing to place blame on perpetrators or combatants in wartime.

He recalled an encounter with a former militia fighter who was injured as a teenage combatant in 1976. The fighter, Hermes said, perceived himself as a victim in accordance with the Lebanese popular perception while also expressing fondness for the “good days” of the civil war.

Hermez ended his speech in quoting from the last paragraph of his book.

“There is that one-and-the-same moment, the past that is dead and another that continues so destructively into our future: A past that kills, if not our bodies, then our homes, our cities, our villages, our futures,” Hermez said.