Men’s Tennis: Northwestern rebounds after Friday loss against Indiana to take down Louisville 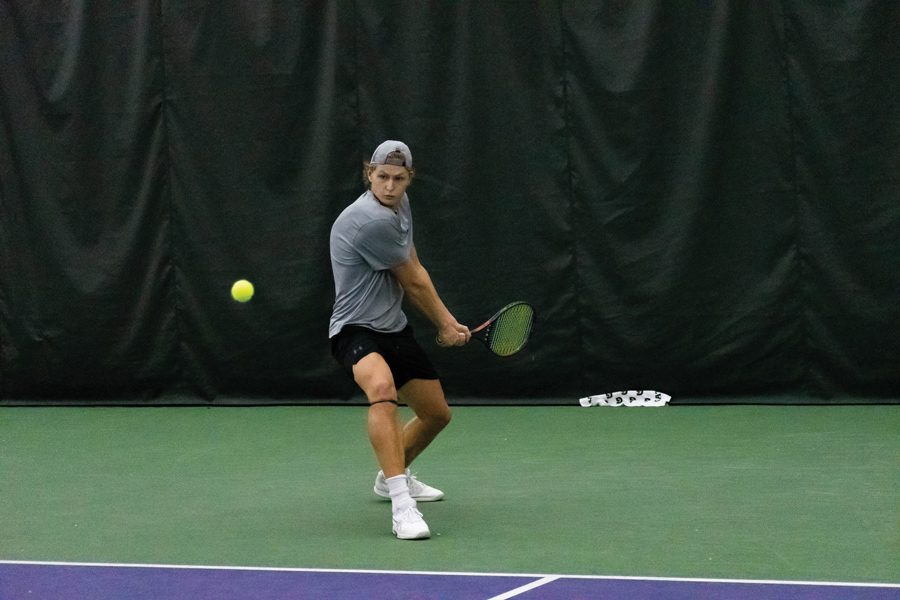 Simen Bratholm anticipates a backhand. The Wildcats lost to Indiana on Friday but came back to beat Louisville on Sunday

After suffering its first Big Ten loss of the season on Friday to Indiana, Northwestern eked out a nailbiter against Louisville 4-3 on Sunday.

Down 3-2 with just two singles matches left to finish, the Wildcats needed to win both against the Cardinals to avoid losing their third straight. Freshman Simen Bratholm and sophomore Antonioni Fasano showed they were up to task as they helped propel NU to just its second road win of the season.

Bratholm had to battle to win his sets. The first two went to a tiebreaker before the Norwegian won the third set more comfortably, 6-2. Fasano’s sets weren’t as close — his match ended 6-4, 1-6, 6-3 — but he nevertheless gave the Cats the win they needed to leave the state of Kentucky on a positive note.

Fasano also won his singles sets on Friday against the Hoosiers, the only singles match NU won in the 4-2 loss. The other point came after securing the win in doubles play thanks to the pairings of sophomore Nick Brookes and Bratholm along with Fasano and freshman Trice Pickens.

Overall, the Cats sit at 9-7 on the season having rebounded from an 0-4 start to win nine of their last 12. The team still has nine Big Ten matches to play before the Big Ten Tournament.

After playing a less-intense schedule the past three weeks, NU will play two matches at home next Sunday against Texas Tech and Illinois-Chicago. Those will be their final matches until March 30.