Men’s Tennis: Northwestern ready to rebound from loss to Columbia as they play in Indiana and Louisville this weekend 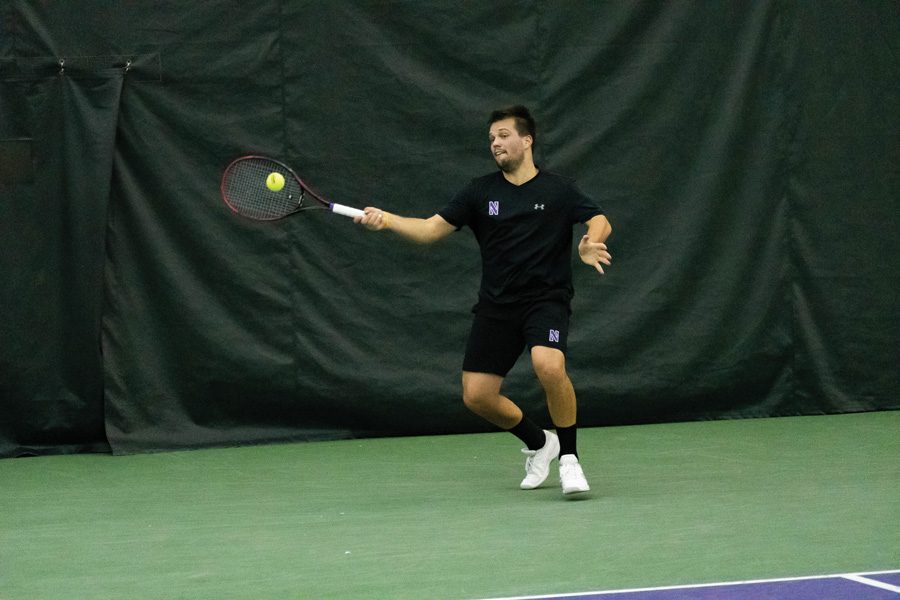 Dominik Stary returns the ball. The junior tennis player has been consistent for the Cats all season.

Being shutout in a match is never ideal, but against Columbia, the 10th best team in the country, the loss provided plenty of motivation heading into Northwestern’s weekend matches against Indiana and Louisville.

Shutout for the second time this season, the Wildcats (8-6, 1-0) will look to rebound in their second Big Ten match of the season on Friday against the Hoosiers (5-6, 1-0) and then Sunday against the Cardinals (11-3).

Following the loss to the Lions (6-1), coach Arvid Swan said although the final score wasn’t close, the team wasn’t far off from winning some matches.

“Obviously the score was 7-0, but we definitely had chances to win several of the matches and take several matches to a third set,” he said. “For us it’s still about the process, and I think instead of looking at it as a negative, it’s looking at ‘OK that’s where a top-10 team is right now, and that’s where we need to get to.’”

Swan said the players have had a strong week in practice and doesn’t believe they have lost any confidence. Instead, he said they realized they need to continue to improve.

This season, NU is 6-1 at home and 2-5 away from Evanston. However, those road losses excluding Columbia came at the start of the season, when Swan said the team was in a very different spot from where it is now.

“I feel like we’re a much better team than we were earlier in the year when we took some losses on the road,” Swan said. “I think we’re confident in the way that we’re playing singles and doubles. It is always more of a challenge on the road — there’s no question. But I think the guys are ready to put together two good matches against Indiana (and) Louisville.”

Both Indiana and Louisville have winning records at home, and the Cardinals have yet to lose. To hand Louisville its first loss, the Cats will lean on juniors Dominik Stary and Chris Ephron who have each provided consistent contributions to this young team.

Friday marks the start to the second half of the season for NU. Looking back on how the first half took shape, Swan said he’s encouraged by what he has seen from his team.

“It’s been a year in which I’m really proud of our team in terms of just the amount of improvement we’ve made in singles and doubles … and the way the guys have stuck together even with a rough start,” he said. “Every single match from here on out is really important both from Big Ten standings and NCAA standings. The goal is still going to be to continue to improve throughout the year and then to give ourselves as many chances to win as we can.”