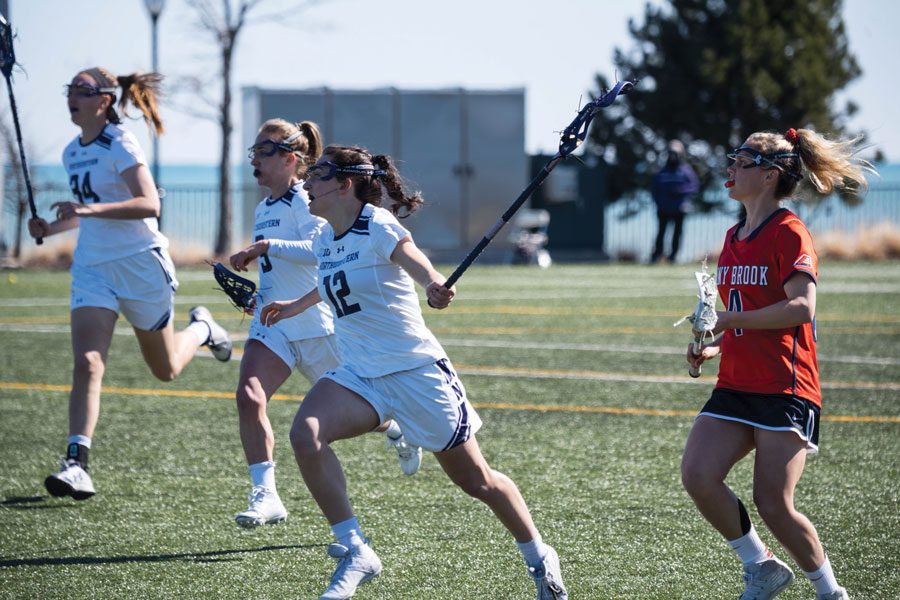 Megan Kinna runs ahead. The junior midfielder has scored five goals this season.

A week after its comeback win against Duke, No. 5 Northwestern felt the other end of a crushing late-game rally Sunday morning against No. 4 Syracuse.

The Wildcats (4-1) trailed for most of the game against the Orange (5-1) before grabbing a two-point lead with seven minutes left to play. NU committed costly turnovers for the remainder of regulation and overtime, which ended in a heartbreaking 15-14 loss.

Despite coming into the game with one of the top ranked scoring offenses in the country, the Cats struggled to score goals against the Orange. Syracuse committed almost twice as many fouls as NU in a seeming effort to slow down their offense.

“I don’t necessarily think the fouls slowed us down,” coach Kelly Amonte Hiller said. “We didn’t play our game and we didn’t do the things that we do well.”

The loss may have stung the Cats, but sophomore goalkeeper Julie Krupnick’s performance was the silver lining of the game for NU. Krupnick played the entirety of Sunday’s game, picked up three ground balls and raked in 14 total saves, her second-highest mark of the season.

However, immediately after the game, Krupnick seemed down after allowing the game-winning goal. The rest of the Cats consoled and encouraged the goalkeeper after her performance.

“We just have to have each other’s backs and tell each other we’re here for a reason,” senior midfielder Kim Harker said. “We’re the best in the country, and we just have to act like it and play like it.”

Senior attacker Selena Lasota returned to the lineup against the Orange as well. Lasota was sidelined last week against the Blue Devils due to an injury suffered in NU’s game versus Dartmouth.

Lasota put together a solid outing against the Orange, racking up two goals and five ground balls, before committing a costly turnover on the Cats’ lone possession in overtime.

“(Lasota) didn’t have success and that’s on us,” Amonte Hiller said. “(Lasota) nine out of ten times will make a play there. We took a chance, and it didn’t work.”

After the tough loss, NU bounced back without a hiccup in their back-to-back game Monday against Canisius (0-3). The Cats stormed out to a 13-3 lead in the first half and never looked back.

Being in commanding position to win the game against the Golden Griffins, NU experimented playing different goalkeepers in the second half. Freshman and senior goalkeepers Madison Doucette and Mallory Weisse both logged a season-high in minutes played.

“They all played well. They all stepped up and made saves,” Amonte Hiller said. “Anytime we can get the others a chance, we try to because you never what’s going to happen. You always want to have a backup ready in case somebody gets hurt.”

The Cats’ next two opponents might be toughest on their entire schedule. NU will play No. 3 UNC (3-1) on the road Saturday before hosting the country’s top team, Boston College (5-0), next weekend.

The Tar Heels also represent a big revenge opportunity for the Cats. UNC handed NU two losses last season, including their season-ending defeat in the playoffs.

“There probably is some added motivation, especially since we’re going down there and we played down there last time too,” Amonte Hiller said. “Anytime you play a great team, there’s always going to be some added emotion … so we always have great games against UNC, and I expect nothing less than that.”