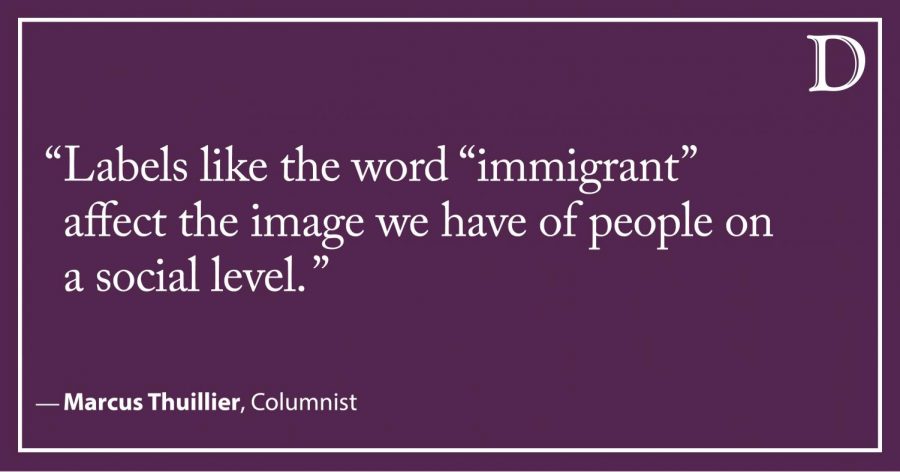 Why do we have to carry labels around?

I asked myself that this past week, as I was standing in line for the first of a few appointments I need to attend to complete my naturalization process. As I waited for the office to open, I kept an ear out and heard people speaking many languages. Although I could not understand what they were saying, I knew what the mix of foreign tongues meant: “immigrants.” However, it did not matter that this moment was supposed to be celebratory, a first step in the journey to citizenship — the minute I thought about the word “immigrants,” all the negativity surrounding that label got to me.

Labels like the word “immigrant” affect the image we have of people on a social level. In the United States, especially in recent years, the labels “immigrant” and “illegal immigrant” have been synonymous with crime and violence. This could not be further from the truth, as shown time and again by studies that highlight a lower crime rate among immigrants than those born in the U.S. Some media outlets like Al Jazeera have dropped the word altogether because of its negative connotation, opting for the word “refugee” instead, when applicable. If you need any more proof that “immigrant” isn’t always used neutrally, consider that people from Western Europe who migrate will often be talked of as expats rather than immigrants, according to Emma Briant, who wrote “Bad News for Refugees.”

When only white people are not referred to as immigrants, it is easy to see the racial motivations behind labels, like asking a person’s ethnicity (e.g. Hispanic or Latino) and then their race on the United States Census, even though these markers aren’t always aligned with how people see themselves and ultimately drive a wedge in their communities. To a certain extent I feel this way: The label white more often than not denotes white-American, and though the label fits my skin color, I always use my national identity instead when it comes time to define who I am. Trying to label a group of millions of people with different individual identities will always be a tough task, but especially when it comes to non-white immigrant groups, such labels can be completely out of touch with the realities of those communities.

All labels have stigmas associated with them, and some extend past the racially charged bubble I described above. In the political sphere, Americans are still terrified of the label “socialism” because of its associations with the Soviet Union, choosing to disregard the success of social-democratic parties in Western democracies like France or Germany. Labels also fail to accurately describe the religious experiences of many Americans. Although President Trump said, “We’re a nation of believers,” that label would not apply to atheists — about a quarter of the American population according to a new study. That same quarter of the population may feel equally targeted by the phrase “one nation under God” in the Pledge of Allegiance.

Labels sneakily undermine the unity of the people they are trying to group together. I am not here denying that some of those labels are true — immigrants are, after all, immigrants, and I am one of them. But it is sickening to know that the word immigrant means something different for me, a white man who was born in France, than for anybody coming into the United States with a different skin color. Those labels need to be rid of their negative and non-inclusive implications in order to properly encompass the breadth and diversity of the people they characterize.