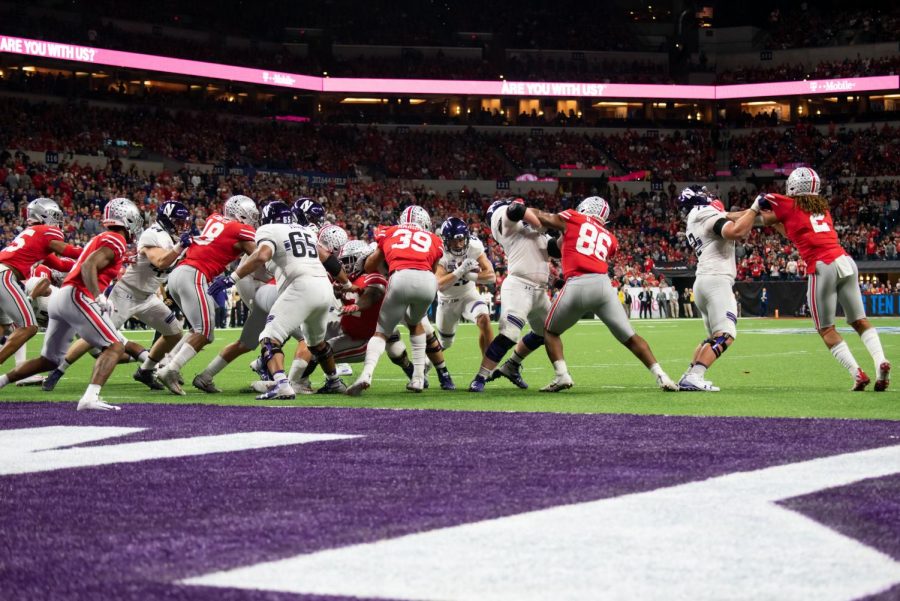 Northwestern’s defense faces off in the Big Ten Championship game. The Wildcats will return several starters this season.

That’s what coach Pat Fitzgerald called his biggest takeaway from the 2018 season, one in which Northwestern went nearly perfect in conference play, advanced to the Big Ten Championship Game and took home its third straight postseason trophy with a 31-20 win over Utah in the Holiday Bowl.

“What we do and how we do things works to a championship level,” Fitzgerald said. “And now to become consistently at that level, what it’s going to take to consistently do the things to get there is now the challenge.”

Just over two months since the final whistle blew that rainy night in San Diego, the Wildcats opened spring practice on Tuesday at Ryan Fieldhouse. The Daily was there to hear from Fitzgerald, senior defensive lineman Joe Gaziano and redshirt sophomore quarterback Hunter Johnson as the preparations for the 2019 season began.

Spring football consists of 15 practices, nearly half of which are live-contact, and runs through the second week of April.

An offseason in Ryan Fieldhouse

The weather outside — around 23 degrees — was far from spring-like, but inside the new Ryan Fieldhouse, the Cats were protected from the 10-plus miles per hour wind gusts and clearly enjoying their still relatively-new digs.

Fitzgerald emphasized how beneficial it was for the program to begin spring practice in the state-of-the-art, on-campus facility and looked back on the past as the Fieldhouse approaches one year in operation.

“It’s unbelievable,” Fitzgerald said. “But more importantly, from an ebb and flow of the day experience of our guys, we try to build everything around that to make their day as efficient as possible. And I think we accomplished that goal without a doubt.”

Coming off of its first trip to Indianapolis for the Big Ten Championship game, NU has certainly set the standard for the program’s expectations. The class of 2019 led the Cats to a program-record 36 wins over the last four seasons.

“We raised the bar last year, and credit to the seniors who helped us get there,” Gaziano said. “At the end of the day, it’s still fundamentals and still getting in the weight room and grinding every day, so the process hasn’t exactly changed. But I think the broad scope at how we look at things has changed slightly.”

Along with captains Clayton Thorson, Montre Hartage and Tommy Doles, NU has lost an additional eight starters. The Cats will now have to figure out how to fill the holes and play up to the standards of the past four years.

When the Cats kick off against Stanford on Aug. 31, it’ll be the first time in five seasons that Thorson — NU’s all-time winningest quarterback — won’t be on the sideline wearing purple and white. Thorson left his mark on the program, and now it’s time for someone new to take the reins.

Many fans believe that job will fall into the hands of Johnson, a highly-touted transfer. Johnson was ranked the No. 1 quarterback in the class of 2017, according to ESPN, and spent the entire 2018 season running the scout team and watching from the sideline.

“All the guys really looked up to him and respected him. He was here for a long time and he earned that,” Johnson said about Thorson. “Just earning that type of respect to getting to that point and onward, it takes time, and he was a perfect example of that.”

However, Fitzgerald said every quarterback will get an opportunity to compete for the job.

“The rotation is very similar to what we’ve done in the past when we’ve had quarterback competitions,” Fitzgerald said. “It’ll be equally shared until somebody separates themselves.”