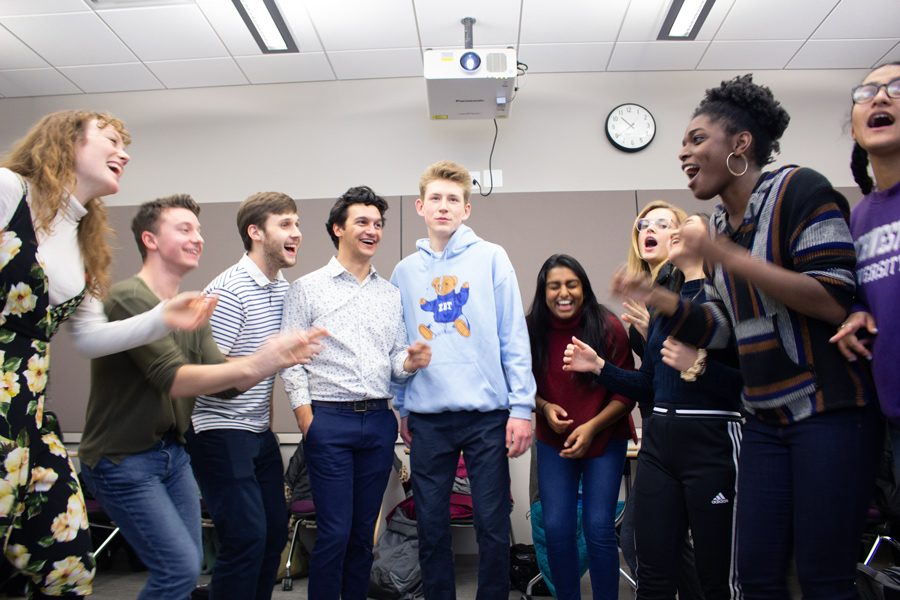 A cappella group Thunk rehearses for the SMILE Spring Showcase. Thunk is one of 16 acts performing in the showcase, which will take place throughout the first weekend of spring quarter.

As an opportunity for over 250 student performers to come together in one benefit show for the Ann and Robert H. Lurie Children’s Hospital of Chicago, the SMILE Spring Showcase is the first of its kind at Northwestern.

The showcase will take place April 5 through 7 in Cahn Auditorium. The weekend will feature 16 student acts ranging from magic to jazz orchestra to a cappella.

Communication senior Daniel Bunning said he was surprised by how many student performance groups he knew of, but hadn’t seen live. He said his desire to bring those groups together inspired him to organize the showcase.

“It doesn’t make sense that even if I’m in the theater community, I haven’t seen so many of these great performers from NU,” Bunning said. “There should really be a space for all of this.”

SMILE, or Students Making Inpatient Life Entertaining, is a nonprofit organization that was started by Bunning and SESP senior Bennett Robinson this school year. Some of the groups performing at the SMILE Spring Showcase include Thunk, Boomshaka, Northwestern Bhangra and Mee-Ow. The showcase will also feature some solo acts.

Holly Hinchliffe, the president of Thunk a cappella, said she is excited for her group to work with Freshman 15 a cappella for the event.

“It’s an amazing opportunity for collaboration between groups across campus who often times have separate shows,” Hinchliffe said. “To put them all in one space for performances is a very community-based thing.”

Hinchliffe said she received an email fall quarter asking if Thunk wanted to participate in the showcase. She said the group had to send in an audition video before being formally accepted.

Weinberg senior Louisa Dangoor, a recruitment chair for the showcase, said she spent much of fall quarter reaching out to student groups and spreading the word about SMILE. Since SMILE is a new group, Dangoor said her job included not only forming relationships with student groups, but also explaining the proposed impact of the organization.

SMILE is working with Bridge Out, a student group on campus that connects nonprofits with NU students and facilities, to produce the show, Robinson said.

All of the proceeds from the show will benefit Lurie Children’s Hospital, which Bunning said is an organization close to his heart.

“I thought it would be cool to have all these groups coming together to raise money for something,” Bunning said. “I’ve had a lot of health issues growing up, so it was an obvious choice for me to choose Lurie Children’s.”

Bunning also enlisted the help of Communication senior Michael Kelleher, who was the executive producer of last year’s Dolphin Show, to produce the showcase.

Kelleher said he has faced some difficulties in producing the event, especially because it involves so many people.

“One of the big challenges is that there are 250+ performers and we have to figure out how we’re going to coordinate all their schedules and get them all rehearsed so we can make the show totally seamless,” he said.

Despite the logistical issues, Kelleher said he is excited for the showcase. He said it has the potential to do a lot of good for the children at Lurie’s Children Hospital, as well as for NU.

“It gives us moments to come together and celebrate the best of what Northwestern can do,” Kelleher said.