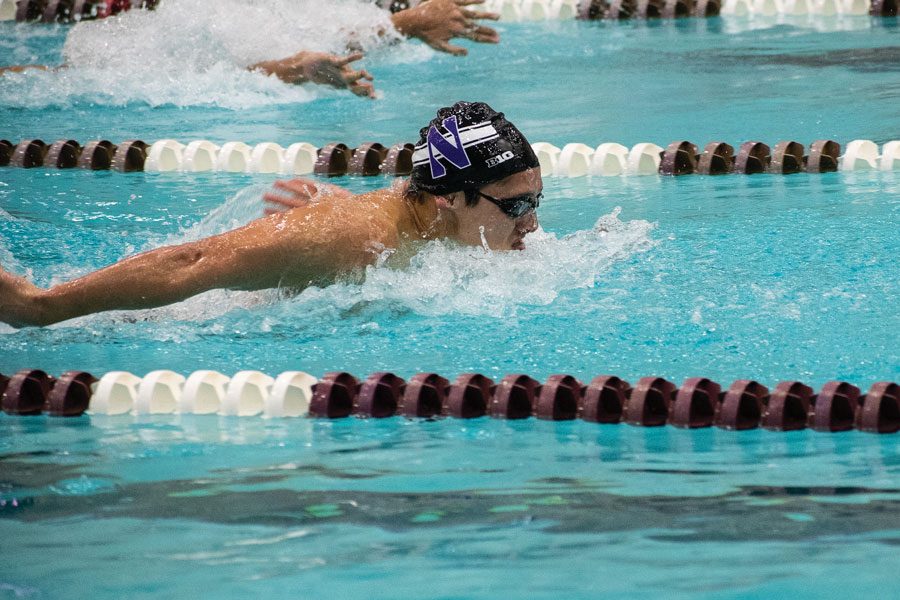 Justin Hanson swims the butterfly. The Wildcats are hoping to improve on last year’s ninth-place finish at the Big Ten Championships.

Northwestern finished ninth at the Big Ten Championships each of the last two years, beating only lowly Michigan State.

The Wildcats (3-6, 0-5 Big Ten) will try to move up in the standings at this year’s meet in Iowa City, which will take place from Wednesday to Saturday. NU is a very young team this year, as 16 of 25 swimmers are freshmen or sophomores. The Cats also have a first-year coach in Jeremy Kipp, so the learning curve has been steep.

Freshman Andrew Zhang said the Cats’ goal is to finish ahead of at least one team they were behind last year.

“As a team, we want to move up the ranks,” Zhang said. “We’re trying to knock off a couple teams that were higher than us, and to do that we’re trying to outqualify them during prelims. We need to get our hand on the wall before they do.”

The Pennsylvania native has been one of NU’s strongest swimmers this season and holds the team’s top time of the year in both the 50- and 100-yard freestyle events. He is second on the Cats’ top times list in the 100-yard backstroke.

Zhang is one of several freshmen who have performed well throughout the year. Ryan Gridley swam NU’s fastest time in the 200 back and placed first in the event at the TYR Invitational. Henry Blaul did the same in the 200-yard breaststroke, and Yohan Eskrick-Parkinson has the Cats’ top score in each of the three diving events.

“We’re excited about this meet because it sets us up for the next few years,” Zhang said. “We’re very excited about the coaching staff. The training that they’ve provided us has been incredible.”

Senior Will Hofstadter has also been one of the Cats’ top swimmers this year. He is first on NU’s top times list in the 100 breast and second in both the 200 breast and the 50 free.

The Cats swam against Iowa and Wisconsin in Iowa City in January, so familiarity with the pool should help them this weekend.

“That’ll definitely be a leg up for us,” Hofstadter said. “We all liked the pool, so that just makes it a little more comfortable, less time to adapt.”

The high point of NU’s season was winning the TYR Invitational in November. The Spartans were also present at the three-day event. The Cats have beaten Michigan State at the TYR and at Big Ten Championships for the last several years, but have not won a dual meet against a conference foe since January 2014.

Outside of the TYR, NU has competed exclusively in one- and two-day meets. This weekend will be much more of a grind, with seven sessions spread across four days.

“For a lot of our earlier dual meets, the day before, we would race, then we would go up for the meet and then the next practice we would also do racing, just to prepare for this,” Hofstadter said. “Most of the upperclassmen have done longer meets like this, it’s mostly just making sure the freshmen are ready.”