Martinez: The Oscars are getting better — but there’s still a disconnect 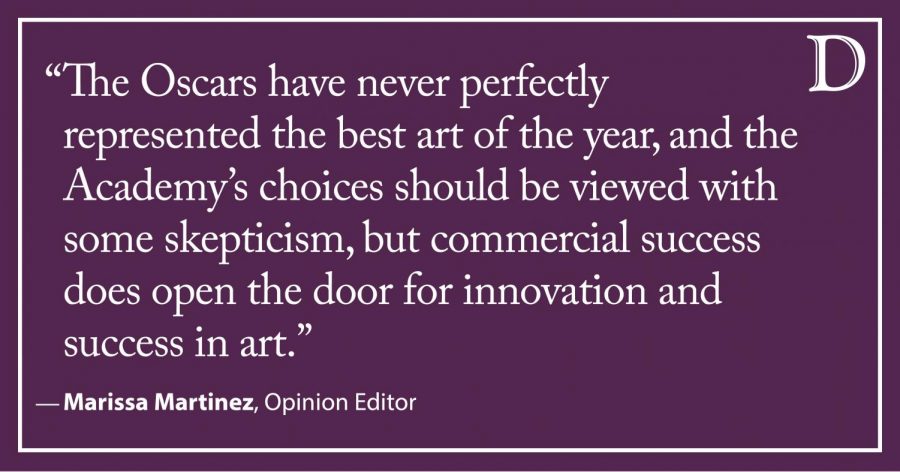 As Julia Roberts handed the Oscar for Best Picture to the “Green Book” team, the newsroom and I, somewhat jokingly, waited for a beat. Would this be another “Moonlight”/“La La Land” scenario?

Unfortunately, this was not the case. “Green Book” is a film riddled with controversies, from an inaccurate portrayal of the main character, Don Shirley, to the other lead actor, Viggo Mortensen dropping the N-word during a panel about the movie, to co-writer Nick Vallelonga’s Islamophobic tweets. Moreover, it peddled a white-savior narrative and took away a lot of the voices from the black artists who struggled during the 1960s — this was further cemented by Mahershala Ali being nominated for a Supporting Actor role rather than a lead. “Green Book” winning over monumental films like “Black Panther,” “Roma” and “The Favourite” was upsetting, but not at all surprising.

Those problems are huge and reflect a continuing disconnect between Academy Awards voters — a largely homogeneous group — and popular discourse about mainstream films. Many have compared this award, which is almost universally considered a poor pick, to films notorious for fumbling nuanced racial narratives like “Crash” and “Driving Miss Daisy.” But they should not detract from the progress made in the rest of the categories and the ceremony itself.

This year, Hannah Beachler and Ruth E. Carter were the first black women to take home awards for production and costume design, respectively, and to win a non-acting category since 1984. Mahershala Ali became the second black man to win more than one Academy Award, after Denzel Washington — and was among three out of four actors of color to win in the main acting categories. Domee Shi brought home an Oscar for her animated short, “Bao,” which showcased a mother-son relationship in an Asian household (and personally, made me cry in theaters).

It was a great night for women and people of color — particularly those who speak a language other than English. Hearing people like Javier Bardem and Alfonso Cuarón speak Spanish, especially with the nomination of “Roma” — a Mexican film in Spanish and Mixtec — was so refreshing. Diego Luna, who presented the movie as a Best Picture nominee, said, “Ya se puede hablar español en los Oscars. Ya nos abrieron la puerta y no nos vamos a ir ” — translated: “It’s possible to speak Spanish at the Oscars now. They finally opened the door for us and we aren’t going to leave.”

Trevor Noah introduced “Black Panther” as a Best Picture nominee, and joked about growing up in the fictional city of Wakanda: “I would see King T’Challa flying over our village, and he would remind me of a great Xhosa phrase: Abelungu abazi ubu ndiyaxoka, which means: ‘In times like these, we are stronger when we fight together than when we try to fight apart.’” However, the phrase actually means, “White people don’t know that I’m lying,” a joke that flew over most of the audience’s heads, but resonated with viewers all over the world.

While there were some issues with queer representation, as well as some of the award decisions, this Oscars is a far cry from the set of nominations that prompted #OscarsSoWhite in 2015. But it’s hard to be completely satisfied — the fact that a lot of the awards were firsts shows just how slow progress has been over the past nine decades. Time will tell if this is a fluke year, or if this trend will quickly become the norm. The Oscars have never perfectly represented the best art of the year, and the Academy’s choices should be viewed with some skepticism, but commercial success does open the door for innovation and success in art.

Right now, I’m celebrating the accomplishments of the historic firsts, but I’m also looking forward to the distant future, when first-generation, POC, non-English speaking and other disadvantaged students not only gain the technical and creative skills to keep making art, but can get institutional access to jobs and influential positions and keep winning.

Marissa Martinez is a Medill sophomore. She can be contacted at [email protected] If you would like to respond publicly to this op-ed, send a Letter to the Editor to [email protected] The views expressed in this piece do not necessarily reflect the views of all staff members of The Daily Northwestern.