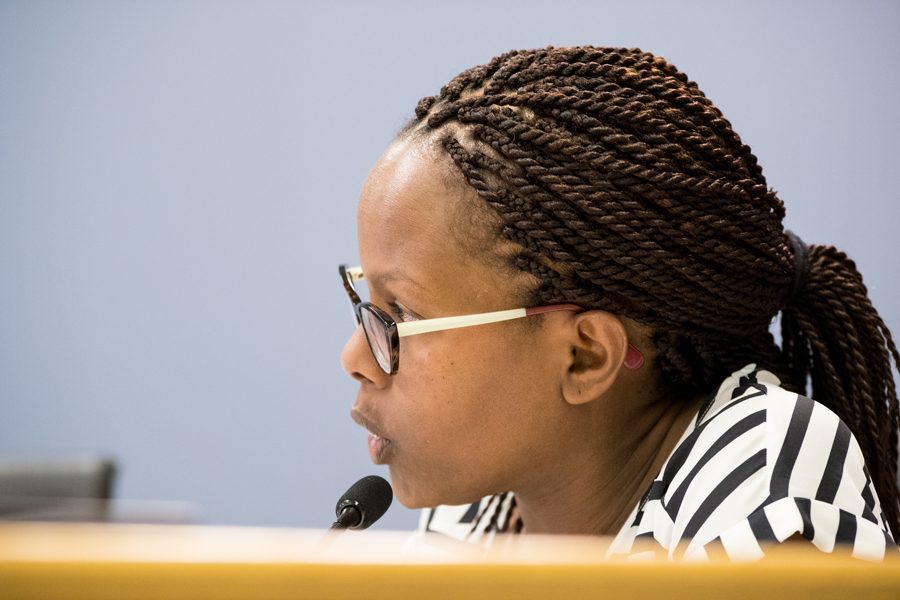 Ald. Cicely Fleming (9th) speaks at an April council meeting. Fleming was reappointed to the National League of Cities Council for Race, Equity and Leadership.

Ald. Cicely Fleming (9th) was reappointed to the National League of Cities Council for Race, Equity and Leadership, according to a Tuesday news release. She was originally appointed to the 2018 council.

The NLC formed the REAL Council in 2014 in response to protests in Ferguson, Missouri over police officer Darren Wilson’s fatal shooting of Michael Brown. The REAL Council works to equip local government officials to eliminate racial disparities and build healthier communities by offering tools and resources to local officials.

The organization hosts both in-person and online training sessions on both broad and local racial issues. REAL tactical teams work with communities to advise on a three-phase racial equity plan catered to a city’s needs.

The National League of Cities provides tools for advocacy and resources to more than 19,000 cities, villages and towns and has 49 state municipal leagues.
Members of the REAL Council provide oversight and guidance to the National League of Cities as they carry out their mission of addressing race and equity issues. The council values collaboration, gathering insight from diverse areas of expertise, according to the organization’s website.

Fleming said in the release that she is “pleased” to be serving on the council again.

“I look forward to continuing to collaborate with local government leaders to create inclusive, thriving and healthy communities while applying proven strategies to advance equity in Evanston and the 9th Ward,” Fleming said.

Fleming has been a leading voice for equity in Evanston. She was a founding member of the Organization for Positive Action and Leadership, an Evanston organization promoting governmental equity through voter education and civic engagement.

Fleming is also a strong advocate for education equity in Evanston, including when U.S. Education Secretary Betsy DeVos rescinded Obama-era regulations designed to protect students of color from over-suspension. Fleming previously told the Daily that the Evanston/Skokie School District 65 needs to be more transparent on punitive measures other than suspensions, such as when students are sent into the hallway or to the principal’s office.

“We are conditioning people to think ‘I don’t belong in the social structure,’” Fleming said in January. “If our society is set up on this track of do well in school, get a good job, be successful, and our first stop is do well in school, and our students are not doing well in school by either being underserved or over-disciplined … we’re not even getting to step one.”